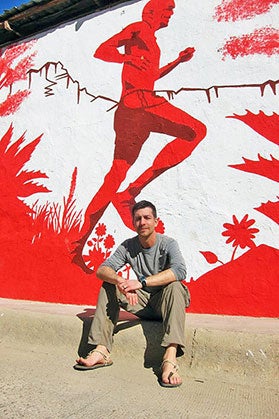 When I first read Christopher McDougall’s Born to Run four years ago, I was in my early 40s and had never run more than three miles without severe back pain.

My wife, Valerie, was pregnant with our second child, and with the looming reality of two young boys, full-time work and a yard and chickens to care for, I was desperate for a time-efficient way to stay fit. I was inspired by the seemingly miraculous stories of Barefoot Ted and Chris McDougall transforming themselves into runners.

The story placed a longing in me. Not just to run, but  to run pain free; not just to run an ultra, but to run the Copper Canyon Ultramarathon, a 50-mile race alongside the Tarahumara, the Mexican tribe made famous by Born to Run. I wanted to experience  the kórima—“sharing,” in the language of the Tarahumara—of the ultrarunning community that made the annual pilgrimage to the race, the ones that race founder, Micah True “Caballo Blanco,” called Mas Locos.

After reading the book, I jumped in headfirst, buying FiveFingers, taking a running clinic with Barefoot Ted and, the next year, running my first ultra. I bought a pair of Luna running sandals, Ted’s Tarahumara- style huaraches, and spent my weekends running the beautiful mountain trails around Seattle.

I would often stop by Ted’s garage to tinker with my Lunas and swap huarache designs. As Luna began to grow, I saw an opportunity to follow my bliss. When I told Valerie one day I intended to leave my secure job at Seattle University to make huaraches for Luna, she said, “Are you crazy?!” I was one step closer to becoming a Mas Loco.

On March 27, 2012, when Caballo wandered into New Mexico’s Gila Wilderness and never returned, I lost part of that dream—but this year, I was more determined than ever to run the race in honor of Caballo.

In March, my coworkers at Luna—Ted and brothers Scott and Bookis Smuin—and I met up in Mazatlan with several Mas Locos to begin our 21-hour journey on Mexico’s public transportation to the town of Urique, at the bottom of Copper Canyon.

The Thursday before the race, about 80 of us went for a morning hike to one of Caballo’s favorite spots, a small farm called Los Alisos. There, we relaxed with new friends and ate sweet grapefruit from the trees. Guadjuko, Caballo’s faithful dog, came along.

Caballo’s soulmate, Maria Walton—or as he called her,  La Mariposa, “the butterfly”— gathered us into a circle. She passed Caballo’s ashes around, that we all might have a moment with him, before reading us a story he’d written about the couple that had lived at Los Alisos, then scattering his ashes on the ground around us.

The race began at 6 a.m. on Sunday. Training in Seattle all winter had done little to prepare me for the 100-degree weather. Dehydration caused severe stomach distress, and, for hours, I couldn’t eat or drink. With 10 miles to go, I sat down on the sidewalk in Urique. Luis Escobar, the Californian ultrarunner and photographer, ran up to me and asked if I wanted to finish.

“So badly,” I said, and burst into tears.

“But I’m not going to make the cut-off,” I protested.

“This is Mexico,” he said. “What do you think they’re going to do?” He took the yellow Buff off his head, soaked it in water and placed it on my head. “I won the HURT 100 wearing this. I’ve run Badwater three times in it and Western States seven times. No one has ever quit while wearing it, and you are not going to be the first.”

Bookis offered to pace me for the last 10 miles. As we walked, the sun set behind the canyon walls and I vomited every last calorie left in me. Without Bookis there to make me laugh about it all, I surely would have quit.

When I finally stumbled across the finish line, two hours after the cut-off time, my friends greeted me with cheers. Mariposa threw  her arms around me and a finisher’s medal around my neck. I felt overwhelmed with joy—not for completing a goal four years in the making, but for experiencing the kórima of this Mas Loco community.