Trail runners are less likely to play it safe in life 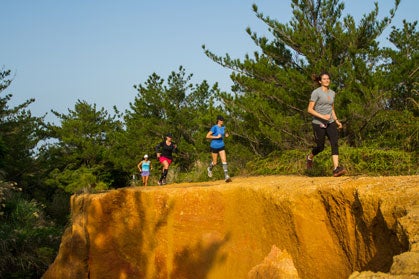 Running the trails of Okinawa. Photo by Kevin Kelly

Out on a group trail run in Okinawa recently, a photographer who came along to take some action shots was a little startled as we began climbing a particularly narrow and rocky stretch of trail. As he kept his eyes to the ground and tried to steady himself with each footstep, he asked if any of our group members had hurt themselves on our trail runs.

“Of course,” I said. “We’ve had broken toes, cuts and grazes, and even a couple of stress fractures.” As quickly as the words spilled out of my mouth, they were just as quickly forgotten; my mind was too engrossed in the moment and the immediate joy of maneuvering my way across slippery rocks and dirt.

Later, as I reflected on the morning’s run, my thoughts returned to his question. It brought to mind an incident when another runner new to the trails had come out to join us. We had started out on an overgrown trail that day, and the new runner, a young woman, had gone on ahead with the lead runners.

A few minutes later, as the rest of our group followed, the young woman came tearing back towards us in a state of panic; she was terrified of what might be looming in the long cuts of grass. Okinawa is known for its indigenous and potentially lethal “habu” snake, and, like it or not, the prospect of crossing paths with one is a reality for local trail runners. The woman yelled, “You girls are crazy!” as she high-tailed it back to the safety of her car.

Really? Are we crazy? Do we love our sport so much that we have become blinded to its dangers? Or are we simply more willing than others to take risks?

Trail running can result in bold and positive changes in the lives of those who truly embrace it. I read an excerpt recently from the book Running the Edge: Discovering the Secrets to Better Running, in which the authors implied that the majority of adults will end up settling for “average”—or, in other words, mediocre—lives. Trail running does not allow for mediocrity, since every run involves elements of surprise, vigor and risk.

As I think about this concept and how it applies to my own life, I hope that it spills over into the lives of my children. My oldest is a high-school graduate, currently working in the field of event management but also considering possible college options. Strange as it may sound, I’m not entirely in favor of her falling in line with the mainstream order of things—which, for a female high-school graduate, generally involves going straight to college, followed by the pursuit of a good job, a successful spouse, a family and, of course, material wealth and career advancement.

What I do favor for her, and for my younger daughter, is a life that’s constantly evolving by order of what’s meaningful and purposeful to them, as opposed to what society expects of them. I want to encourage them to risk following different and “scary” paths, if that’s what it takes to reach their goals. Many of their peers will choose to stare at their hopes and dreams from afar, too afraid to move towards them. I hope, however, that my daughters will acknowledge the poisonous snakes, the dangerous rock crevices and the hidden tree roots, and recognize that they are merely obstacles and not roadblocks.

Such is life for the trail runner. Every path traveled is full of obstacles that threaten to stop us in our tracks. Yet, diverting to a safer, more traveled path that leads to an “average” destination simply isn’t an option.

Jannine Myers lives in Okinawa, Japan, where she works as a running coach, weight management consultant and freelance writer. She blogs at www.gotheextramilewithwoot.blogspot.com.