How three top trail runners got their chops 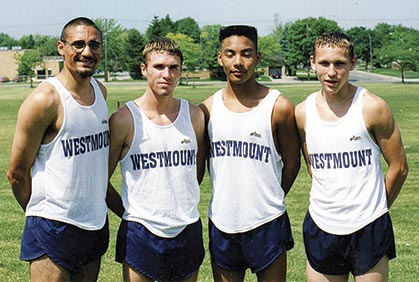 Much as we’d like to believe, Rob Krar, the scraggy ultrarunning phenom, was not raised Mowgli-style by wolverines in the Canadian wilderness. He didn’t have a grizzly bear for a best friend. His speed didn’t come by racing snowshoe hares along the shores of the Hudson Bay.

Despite the tall tales that surround the folks who vanish into the mountains for 30-, 50- or 100-mile runs, the truth is that they grew up like the rest of us. They went to school. Many ran on their cross-country teams. Some were great from the beginning, while others held more jacks than aces.

Krar competed at the 1998 NCAA DI Cross Country Nationals during his junior year at Butler University, the same year Adam Goucher famously won the title, as documented in Chris Lear’s Running with the Buffaloes. Krar fell away from running for years after college, caught in cycles of injury and depression and struggling with his erratic schedule as a nighttime pharmacist.

Today, though, he holds the record for the Fastest Known Time on the Rim-to-Rim-to-Rim traverse of the Grand Canyon (6:21:47) and, last June, won the prestigious  Western States 100-Mile Endurance Run.

“I began running in middle school after it had become abundantly clear my soccer and hockey skills were substantially substandard.”

“Although I played around on the trails in 2009, it was really a decade after college until I embraced MUT [Mountain/Ultra/Trail] running in 2012. It was an unexpected rebirth of my running career and one my body and mind have fully embraced since.

“I almost cringe when I say it because the thought of running for so long is still daunting, but, after two Western States 100s, the challenges that distance presents have made it my favorite to race.”

“Quality over quantity and consistency in training would be advice I’d offer to everyone.”

“My Grand Canyon Rim-to-Rim-to-Rim FKT remains a favorite of my running and racing performances. I was stepping out of my comfort zone, [it] being only 13 days after the longest run of my life. Although I’d had a few successful days running in the Canyon in the past, I’d also experienced an equal number of miserable and sometimes frightening days below the rim. I tackled my fears and doubts head on, and to have such a magical run that day is something I continue to cherish greatly.” 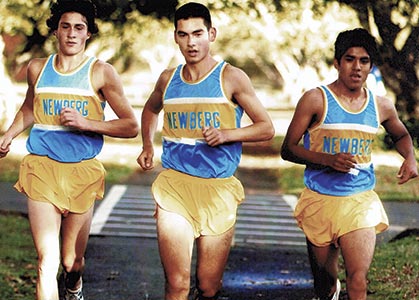 As a senior at Newberg High School in Oregon, Canaday finished 13th at the state cross-country championships and then went on to compete for Cornell University. He qualified for the NCAA Championships in cross country and the U.S. Olympic Trials in the marathon. He ran for the fabled Brooks Hansons Distance Project in Michigan, competing in road marathons before drifting to the trails.

Since then, he has won the 2012 U.S. Mountain Running Championships, the 2013 Cayuga Trails and Lake Sonoma 50-milers and the 2013 and 2014 Speedgoat 50K. His sponsorships include Hoka One One, Ultimate Direction and Smith Optics, among others.

> In the beginning
“[I started running] when my 7th-grade soccer coach told me I was better off without the ball and that I should run up and down the field and be a decoy instead. I didn’t score any goals that season. After that, I dedicated myself to year-round training and did both cross country and track.”

“I didn’t shift to Mountain/Ultra/Trail (MUT) running right after college. At first I spent 2.5 years toiling on the roads doing half and full marathons. As a fellow Oregonian and Cornell grad, I’ve always kept tabs on how Max King progressed and how he transitioned between track, road and MUT running. Before I started doing a lot of ultras, I followed Max’s example and did short mountain races.”

“My favorite race performance is when I qualified for my first Olympic Marathon Trials, at the 2007 Grandma’s Marathon. I ran a nearly even-split race and ended up with a 2:21:43, [with] only 17 seconds to spare before missing the standard (2:22:00 at the time). I threw up on the finish line and was carted away to the medical tent in a wheelchair. It was my happiest moment in running.”

“In high school we used to run six-minute-mile pace on our easy days. It wasn’t easy. If I just had a bigger mileage base and a better trained lactate threshold, perhaps I could have made nationals in cross country or at least qualified for the Oregon state track meet.”

Kaci ran track and cross country (reluctantly) in high school and chose not to compete while attending Creighton University. She ran in road races for several years and now has 10 wins in trail races 50 kilometers or longer (including Bear Chase 50K and Kettle Moraine 100K). She is sponsored by Pearl Izumi and Honey Stinger.

“I started running as a junior in high school (2002). I was bribed by my best friend, Staci, to go out for cross country with her. I had never run before and had always played volleyball. I had one week to start running before school started along with two-a-day practices. I wasn’t good at running and hardly enjoyed it at first.”

“The one that really stands out is my Western States 100 this year. It was not my fastest race, but I gave every last bit of energy, heart and soul to complete it. By mile 47 I knew it was not going to be a good day. I was struggling to run, my breathing was getting short and shallow and I had many demons in my head telling me to stop suffering and take a DNF. I came into the Placer High School Stadium and took my final lap around the track to finish in 20:07:10. It was the hardest race I have ever done, but the most rewarding.”

“It really came to a surprise to me that I shifted to ultra and trail running. I never thought I was going to like it, because it slows you down. I had always been a track and road runner. However, once I ran my first trail race [PsychoWyco 50K, 2012], I was hooked. I loved the atmosphere, runners, scenery and feeling so fully alive.”

“Try hard at something before giving up on it. I was never good at cross country or track. It took several attempts before I finally ran a full cross-country course without needing to walk. And running has now taken me beyond my wildest dreams. Just stay committed and focused and you too can go far!”