For the next two and a half weeks, Trail Runner magazine is teaming up with Protect Our Winters to bring stories from POW Trail Alliance athletes of their adventures in different states across the U.S. Check out the full calendar and register for the series here.

The digital series is hosted by trail runner Stephanie Howe and streamed online. The first episode premiered Tuesday, August 18th, featuring “conceptual runner” Rickey Gates. Gates adopted the term conceptual runner after a friend used it to describe the ways in which he extends the boundaries of traditional running, akin to a conceptual artist. His projects such as Transamericana and Every Single Street continue to reshape the ways we understand running. “I think of running as more than just races, more than just fitness, it’s a way for me to connect with people and get to know our world better,” said Rickey.

In the first episode, dedicated to Michigan, Gates shared highlights from a 80-mile trail running and packrafting adventure from end-to-end and coast-to-coast on Michigan’s Isle Royale, north of the Upper Peninsula. Isle Royale first caught his eye while Gates was living in Wisconsin with his partner during her graduate program. The entire island is a national park (the least visited in the lower 48), has no roads, and is habitat for moose and wolves. With no vehicles or bikes, it sounds like a runner’s paradise.

After covering his Michigan adventure,  Howe asked Gates to explore the more universal connection between running, place and time. Gates, who grew up in Aspen, Colorado pointed out the fires currently sweeping through Colorado’s Western Slope and reflected on his childhood when it wasn’t commonplace to anticipate fires each summer. “We as young people, as trail runners, as nature lovers, are able to see the effects of climate change over a short period of time,” said Gates in response to Howe’s description of annual visits to the receding Mer de Glace glacier in Chamonix.

“We as young people, as trail runners, as nature lovers are able to see [the effects of climate change] over a short period of time”

Gates recently joined POW as a part of the POW Trail Alliance, a group of trail runners working to spread awareness about climate change, how it impacts on our sport, lands, and livelihoods and actionable steps to take leading up to the 2020 election

. Up next for Ricky Gates is a new project, the 50 Classic Trails in North America documenting trails that are worth traveling to, display the continent’s natural beauty, and are rich in geological, ecological, and anthropological features. 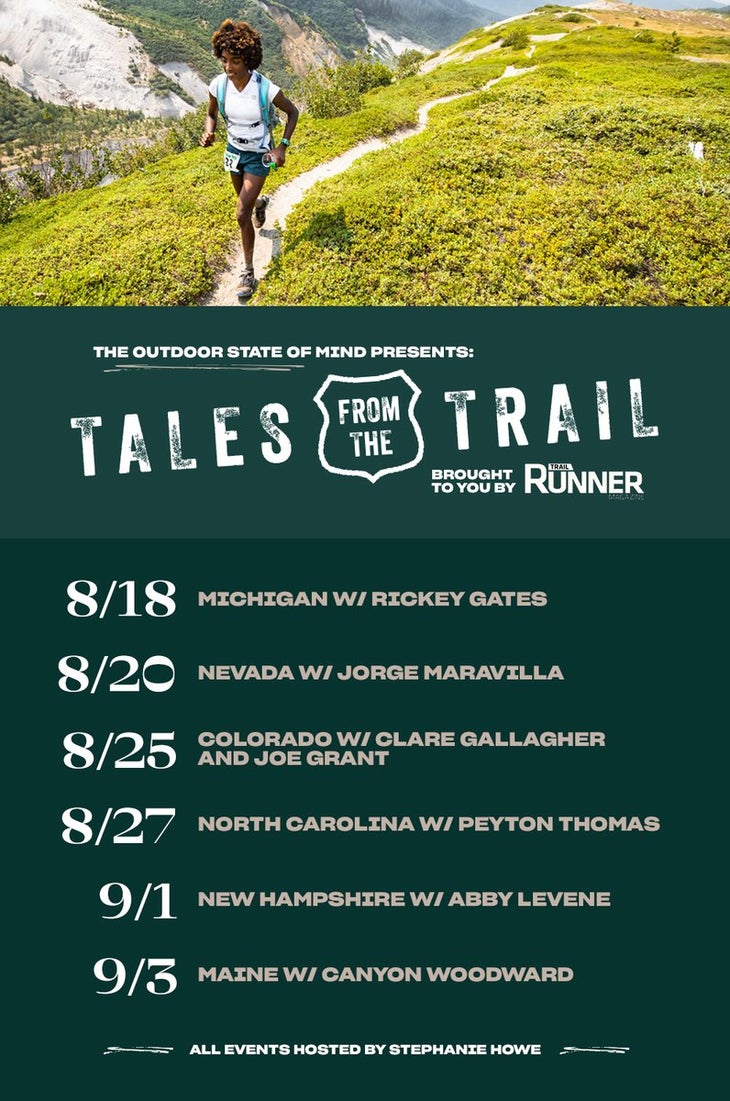 Up next for the Tales of the Trail Series is Jorge Maravilla sharing adventures from Nevada on Thursday, August 20th. During each episode, POW is raffling off two subscriptions to Trail Runner Magazine. Tune in to be eligible and to be inspired.

Jeff Colt is an endurance adventurer based in Colorado’s Roaring Fork Valley. He believes in passively drying laundry and actively calling senators.