Chucking life, if only once a year 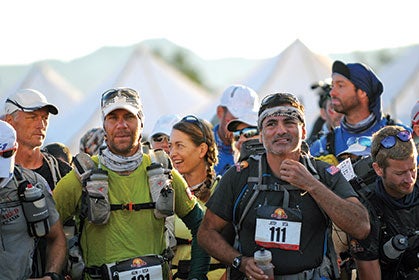 Wearing raggedy gray underwear and a black sports bra stained with dried sweat, I step out of a canvas tent in the high desert backcountry of Southern Utah.

Attempting to cool down in the afternoon heat, I squirt a small amount of rationed drinking water onto the fabric buff around my neck, which I’ve been using all week to wipe my nose. The smell of campfire smoke lingers in my hair and blends with the rank odor from my upper body.

Around me, skinny, scratched-up, half-dressed runners step gingerly on bandaged feet through a campsite where briers sprout burrs and anthills spill red ants. On some of the runners’ backs and shoulders, medical tape covers welts of chafed skin caused by the rubbing of packs.

Some 100 people and I are into Day 5 of a seven-day odyssey known as the Grand to Grand Ultra, a 170-mile self-supported stage race that involves running cross-country through sandy, technical terrain and severe weather while carrying our food and gear on our backs.

Most tend to think of this race as an athletic event that presents an extreme test of endurance, and it certainly is that. But I also think of—and value—it as a lifestyle challenge that provides a taste of a wild, tribal and ascetic way of life that has mostly disappeared from our 21st-century developed world.

A thread of conversation floats out of a canvas tent where two hungry runners bargain over calories. “I’ll trade you two oatmeals for 300 calories of something salty,” says one. “I’m dying for salt!”

A shirtless British runner nearby, who’s wearing slippers he made at camp by cutting pieces of cardboard and attaching them to his feet with hair ties, produces a thunderous fart. Another Brit, standing next to him, nods approvingly.

“Better out than in, mate,” says the friend.

In my regular life, I belong to a demographic where appearances matter. When women in my neighborhood get dirty, they’re usually wearing garden gloves. They exercise at a barre or spin studio, and they visit a dermatologist to melt away the lines between their eyebrows. Adventure might be chaperoning a field trip—something I do, too.

I have a mild side that appreciates the community in which I live and raise my two teens, yet the wild side yearns to break out of the bubble. So I hit the trails and run hard. I never want to lose touch with the natural world or take creature comforts for granted.

But a daily trail run can only do so much to build character and renew gratitude. That’s why I believe in endeavoring to go on a journey to somewhere far beyond my comfort zone, for at least a week each year.

In the first five stages, we run back-to-back marathons with a 53-miler on Day 3, scrambling up the rocky faces of vermillion cliffs and slippery sides of pink-hued sand dunes. Then we unite at camp to care for our feet, rehydrate our paltry dried meals-in-a-bag and revel in each others’ company.

Later on the trail, slogging through soft footing, one runner says to another, “I don’t know what I’m going to do next week, walking on a hard surface. I’m quite going to miss this sand.”

“I’m going to miss eating out of a bag,” replies his friend.

I’m going to miss these people and the environment. I especially will miss this stripped-down, off-the-grid life where my only job is to run from one point to another and survive along the way.

And I’ll even miss the smelly, earthy dirtiness. I don’t want it all to wash away.

Sarah Lavender Smith, a Contributing Editor at Trail Runner, lives in Piedmont, California. She finished second female and 13th overall in the Grand to Grand Ultra. Her race report is on her blog, TheRunnersTrip.com.

This article appeared in our March 2015 issue.