At its essence, running—and especially trail running—is an elemental means of staying in touch with some of the most basic human endeavors: movement over the landscape, discovery, exploration, engagement with one’s surroundings. Certainly these are some of the purposes that running has always served for me. So, when I broke my leg a few years ago, during my recovery, I began casting about for another activity that could fulfill these same purposes, but was a little lower impact.

Lining the hillsides above Boulder, Colorado, the Flatirons are the defining feature of the city, and since I’d dabbled in climbing since college, I figured it was time I actually go scale one of these iconic formations. Thus—with the inspiration and guidance of some mentors and friends—a whole new way of moving within that world opened up to me.

With the appropriate practice and experience, the giant sandstone slab formations of the Flatirons become accessible via scrambling, which essentially marries the primal, unfettered purity of running with the challenge and exhilaration of the vertical realm. Ultimately, honing these skills opens up the possibilities for so many different, interesting experiences in the mountains, outings that go beyond the linearity and reductiveness of simply following a line drawn on a map.

Taken from this perspective, climbing and running will always be inextricably linked for me, since at their core they seem to be one and the same: Go outside, move in the mountains, come back changed for the better.

I now have several standard circuits that link classic Flatiron formations and the summits of the local peaks. One of my shorter, easy day circuits, pictured here, involves enchaining the Morning After, the West Chimney of Green Mountain Pinnacle and Challenger before heading to the summit of Green Mountain and running back down to Chautauqua.

After quick warm-up tags of the more famous First and Third Flatirons, I usually head over to the Morning After. This lesser-known classic boasts a tricky 5.7 roof, a splitter fist crack and striking perspective on the lesser-viewed southern aspect of the Third Flatiron, all of which make it one of my favorite formations in the Flatirons. 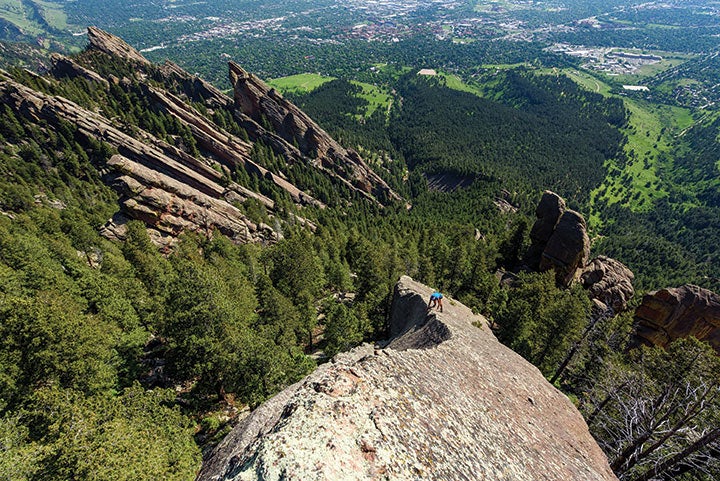 Challenger is a rocket-shaped sliver of rock that sports a seductive north arete. My favorite route on the formation starts with a finger crack before traversing over to the arete and following it as it gradually steepens to near vertical at the summit—a prominent line that begs to be climbed. 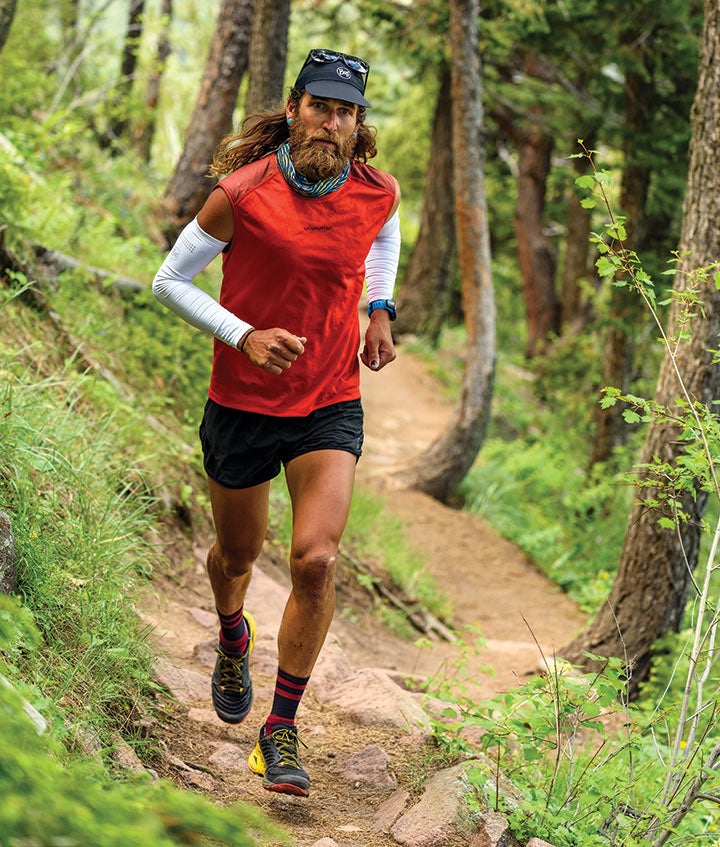 Scrambling link-ups in the Flatirons don’t easily fit into a narrowly defined box. Instead they’re an engaging mishmash of mountain movement: running trails on the approaches, bushwhacking and steep hiking between formations and then technical climbing on the rocks. 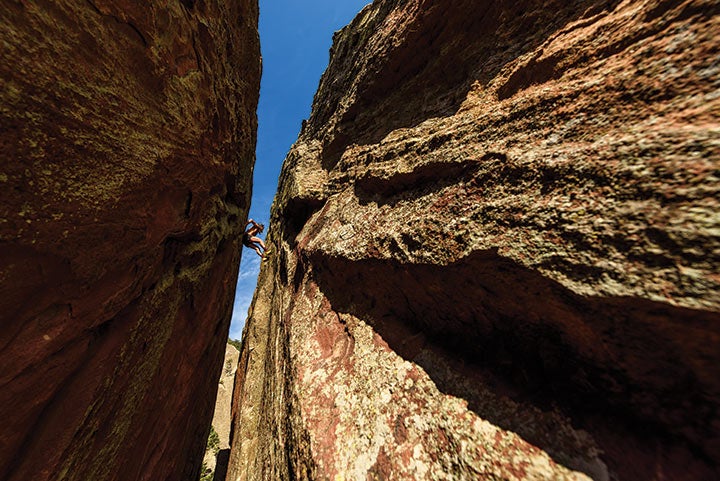 Green Mountain Pinnacle—just below Challenger on the mountainside—is cleaved by the West Chimney, a gap in the tower that is perfectly spaced so as to accommodate the classic technique using only the oppositional force of your limbs to ascend the two walls.

The West Chimney is a perfect example of simply climbing for climbing’s sake—you can reach the top of the formation by an easier slab (which I downclimb), and climbing this feature does nothing to get you closer to the top of the mountain (unlike, say, scrambling Challenger does). Scrambling Green Mountain Pinnacle’s West Chimney is all about taking basic pleasure in the movement and interaction with the landscape.

This article originally appeared in our September 2016 issue.