The trail-running community lost a passionate, kind-hearted, happy-go-lucky soul when Chris Martinez passed away on the morning of June 25, 2020.

Martinez, who was 48, had southwestern desert terrain in his blood, having grown up in and around Phoenix and Prescott, Arizona, and then spending about 20 years in Moab before moving to Grand Junction in 2019. He was known as an enthusiastic trail runner, a spirited race director and untiring whitewater rafting guide. He was a husband and father of two sons and a daughter, a lover of the outdoors and a friend of many.

As the founding partner of 360 Moab Adventures and GrassRoots Events, Martinez helped put Moab on the map as a trail-running destination and loved to share his passion for running and river rafting with anyone and everyone he could. He started the Moab Red Hot 33K/55K in 2007, created a trail-running guide service and put on dozens of other races throughout the years, sharing his love for the Moab area and the desert lifestyle that had become part of the fabric of his life.

“I’m going to miss that dude, a lot,” says Ian Torrence, an elite trail runner and coach based in Flagstaff, Arizona, who met Martinez in Moab in 2001. “He and I were running partners in Moab when I lived there. He loved Moab and was always very excited to share that. He was very connected to the desert.” 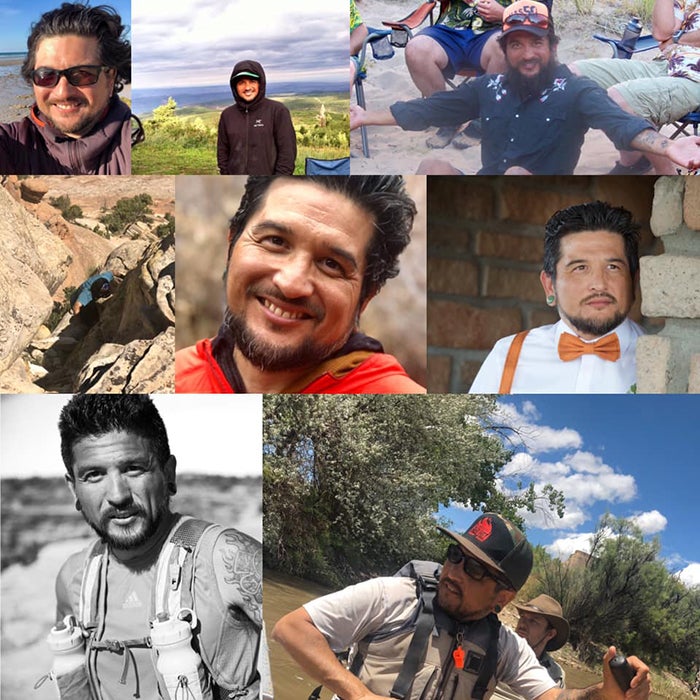 In the early 2000s, Moab was mostly as a mountain-biking destination and only had two popular road-running races, the Canyonlands Half Marathon in the spring and The Other Half in the fall. Although he enjoyed rafting and mountain biking, Martinez fell in love with trail running and became an accomplished runner with dozens of high-level races finishes to his credit.

Martinez and Torrence organized the first Red Hot 50K race in 2004 as an underground, Fat Ass-style event and attracted about 50 runners from around the country. Martinez also started the Moab Alpine to Slickrock 50-miler (aka the MAS 50) in 2004, a spectacular point-to-point race that sent runners from the mountains to the desert.

“He was really talented and super passionate as a runner,” Torrence said. “When he was fit and when I was fit, he could dump me in a trail run, no problem. We kept each other in check, that’s for sure.”

After working to secure permits, Martinez started the official Red Hot races in 2007 with the hope of introducing more trail runners to the beauty of the Moab terrain, but with the goal of always maintaining a congenial, family atmosphere that was authentic to the trail-running community. The 2007 Red Hot 55K had just 22 finishers, but he had added a 33K race the following year and the event grew from a combined 230 finishers to nearly 600 by 2014.

Martinez also created the Amasa Trail Races in 2010, which he and his business partner eventually sold with the Red Hot races to Mad Moose Events in 2015.

The Red Hot races have been a staple of the late-winter trail running scene in the West, attracting a veritable who’s who of the sport—with Anton Krupicka, Rob Krar, Anita Oritz, Dakota Jones, Darcy Piceu, Jim Walmsley, Alex Nichols, Sage Canaday and Ashley Brasovan among the many elite runners who have run the races since their inception

He made the Moab running scene what it is today, and he taught me so much about the area which is part of what made me fall in love with the desert,” Boulder trail runner Eric Lee said in a message on Facebook. “Good dude. He was always stoked to share his running passion with everyone.

“He made the Moab running scene what it is today, and he taught me so much about the area which is part of what made me fall in love with the desert,” Boulder trail runner Eric Lee said in a message on Facebook. “Good dude. He was always stoked to share his running passion with everyone, and did huge things making the Moab running scene what it is now. Always with a smile and a laugh, and occasionally a bottle of whiskey to share.”

Martinez had cancer in his digestive tract on and off for parts of two years, but despite being declared cancer-free after having a tumor removed in 2018, the disease returned last year and his condition worsened earlier this year. He had surgery in April to remove cancerous tissue and organs, but by then it had spread much deeper into his body than doctors had hoped. His condition deteriorated in mid-May and by early June he was in hospice care.

He was in the constant care of his wife of seven months, Amber Espinoza-Martinez, who was holding his hand when he passed away on Thursday morning at their home. His family plans to hold a memorial service in Arizona in November and sprinkle his ashes in two private ceremonies at places that were close to his heart.

“I was by his side and he was comfortable as he could be at home. My hand was in his when he breathed his last,” Espinoza-Martinez said in a Facebook post that has since been flooded with more than 300 heartfelt messages. “He’s fought a great fight. And he had great faith. More than most know. Thank you … from the depths of my soul, thank you.”

A GoFundMe campaign was organized in early June to help his family defray the inordinate medical expenses that have been incurred. Dozens of people have donated to raise $35,000 of the $75,000 goal.

“That dude was tough all the way to the end!” said Daniel Ashurst, who organized the GoFundMe campaign. “I just wanted to say a great big thank you for reaching deep to help Amanda and Chris. I know it helped Chris to know before his departure that people were coming together to give aid, so Amanda was cared for.”