And even that wasn’t enough punishment 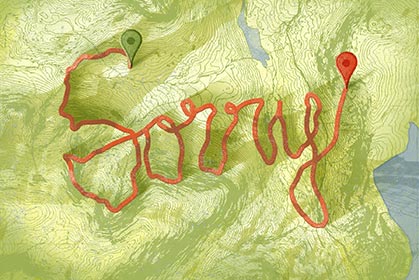 Ashland, Oregon, is a small town. It was only a matter of time before I found out. My training partner had joined an online dating site.

Let me be clear. There was never—will never—be anything romantic between us. This is a man who judges our training by how much he thinks I age in the process. “You look 52. Strong work.”

A man who sulks when I don’t coddle his hysterical “injuries,” like the run when he bit his tongue, or confused indigestion with a heart murmur. A man who regularly says, “You are the least empathetic person I know.”

Still, training partners are sacred. In 17 years of competitive running, I’ve only found two good ones. The first one I lost because I thought I could cure her anorexia with unsolicited and dazzling advice such as, “Put the damn food in your mouth already.”

I didn’t want to lose this one, so I kept my mouth shut. Unfortunately, my imagination ran amok.

I convinced myself that his dates would turn into running dates. That he would ditch me to train with his new girlfriend and in no time at all she would be winning the local Turkey Trot and Santa Shuffle and Freedom 5K. Uh-uh. Not on my watch.

I made a fake profile on the same dating site. My plan was to lure him into asking the fictional girl on a date, and then … I don’t know? I’d show up and he’d realize that love was just a ruse, a distraction, and he shouldn’t waste his time? I didn’t really think it out. What I did think out was the fake girl.

She was magical. Intelligent and self-deprecating. Of course she loved running. She also loved Indiana basketball and hated DIY projects and baked elaborate casseroles. Then I sat back and waited.

Nothing happened. Oh, the decoy racked up messages of amour. It’s just that none were from him.

I started to feel guilty. Even I know it’s bad karma to mess with love. Like the worst karma imaginable. The kind that will hunt you down.

I went to delete the profile, but couldn’t remember my password. I told karma it’s the thought that counts and did what I always do when all else fails. I put my crazy in check, applied it exclusively to running and, after enough endorphins, actually started rooting for him to find a girlfriend.

He waited until halfway through a post-run Sunday dinner before mentioning it.

“Seriously. You’re the only loser this side of the Mississippi who bakes casseroles.”

I didn’t have to look up from my fork to know he was pissed.  I didn’t know what to say. I couldn’t chalk it up to being crazy, because I was. Instead, these are the words I found leaving my big mouth.

A diversion tactic? A flagellation manifested from a guilty conscience? More likely, I was just too proud to say what I really meant, which was, “I’m sorry.”

The next week I ran a boatload of miles and went into the final day, the Sunday-long-run, with 160 miles under my belt and feeling relatively unscathed. In truth, I felt great. So great that I got really drunk celebrating that I had eclipsed my lifetime highest weekly mileage. I thought nothing could stop me.

My confidence came from logistics. For the final day I had chosen a point-to-point traverse through a 40-mile section of Wilderness, the capital “W” variety. No cars, no roads, no bicycles, no bailout option. Once I was dropped at the trailhead, the only way to travel the 40 miles of singletrack to my car was with my own two feet.

At mile five my crotch started tingling, but I didn’t take much notice. Three miles later the tingling spread up into my abdomen and then it suddenly turned into a raging fire from Hell.

The fire lasted the entire remaining 32 miles. It was ugly, but I finished. As far as I could gather, I did so while hosting a living dragon in my shorts.

By the time I drove home I was bent over in pain. Hunched over my computer, I read about urinary-tract infections. The research said I needed cranberries and antibiotics.

But, first, I needed to find that password and fix that karma.

Jenn Shelton is working on hydration in Durango, Colorado.

> Snag a year’s subscription to Trail Runner for just $2.75/issue!