Too young to run?

This article originally appeared in our April 2014, DIRT Issue 95. 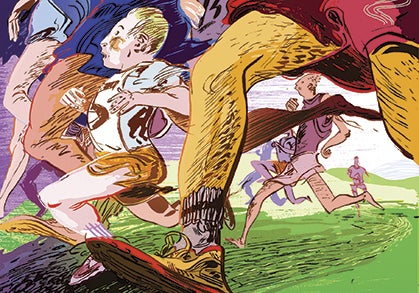 One day I looked at my email to find a request from a top-ranked trail runner, Justin Ricks, seeking advice on an important topic. His daughter Kylah, an analyst, was doing a research project to determine whether it’s good or bad for children to run marathons. She needed some simple questions answered, so I weighed in.

1. Do you think kids should run marathons?

Not unless they really, really want to.

2. Do you think there should be an age limit for marathon participants?

Some people are blessed with talent beyond their years, whether they’re young or old. There should never be an age limit for marathon participants. That would be like putting a limit on human potential.

The second I sent it back, I questioned my gut responses, like the time I downed a double-caffeinated gel during a race. I consoled myself knowing Kylah is only in fifth grade, doing a class project. But they were good questions. Not since 11-year-old Tyler Scholl won a trail race up Vail Mountain have I thought about the possibilities of youth like this.

After some research of my own, amazing facts revealed themselves. The youngest marathoner ever is a boy named Budhia Singh, born in India in 2002 to a very poor family. When Budhia was an infant, his mother sold him to a passing peddler for $20. The peddler treated him badly, so his mother contacted Biranchi Das, a judo coach and orphanage operator. Biranchi gave the small child a place in his orphanage.

One day Biranchi caught Budhia misbehaving and punished him by telling him to run until he, the adult, came back. The coach got busy and forgot about Budhia until he returned five hours later, and discovered him still running. The child’s age is unclear in the research I’ve seen. My best guess is 3 years old. Biranchi started training Budhia to run marathons. By age 4, Budhia had finished 48 marathons. Now 4 and a half, Budhia is claimed to have run a 40-mile ultramarathon in 7:02.

Budhia’s running accomplishments earned him celebrity status and commercial endorsements. Das allegedly profited, and was accused of exploiting the child. He refuted the allegations, and claimed he was training Budhia to run in future Olympics.

Government officials claimed authority over the youthful marathoner and banned Budhia from running, determining he was too young to run farther than 600 meters and that he was being “physically tortured” to run marathon distances. His mother also suggested this claim. Budhia currently doesn’t run long distances anymore.

A conservative part of me thinks the decision was proper. Kids shouldn’t be able to run marathons, but Budhia did. The passionate dreamer in me wishes he were still running like a legend. The officials smothered a great gift, and effectively limited his young potential. Who knows what he might’ve accomplished at such a young age?

And that’s the rub. It comes down to doing what’s best for the kids, and very few of us are prepared to handle a phenom. Officials decided he should be treated like every other kid. Ultimately, I think there’s something wrong with that.

The 5-year-old Jennifer Amyx ran the Johnston YMCA Marathon in Pennsylvania in 1975. She holds several records, including the 5-year-old’s marathon record of4:56:36.

Jennifer’s father, Herb, was quoted in the film Marathon Fever as saying, “I guess in a sense they [kids who run] are guinea pigs. Medically, scientifically, you have to say there is not enough data to know what the long term effects in small children are.”

In 1984, 16-year-old Cathy O’Brien from Janesville, Wisconsin, ran a 2:34 marathon at the Olympic Trials, finishing ninth.

Exclusion of kids is based upon the legitimate fear that kids could get hurt. But tell that to the parents of kids who board half-pipes, ride motorcycles or climb mountains.

Besides, the argument could be made that if children are banned from marathons, why not ban senior citizens as well? Typically, older folks incur a more serious health risk from running marathons than youngsters do.

The Twin Cities Marathon did a study of racers from 1982 thru 2007 and found that all of the 310 youngsters, aged 7 to 17, who completed the race, only four had visited the medical tent. That rate was half the rate of adults who finished the race.

But then there’s Gladys Burrill, who ran a marathon at 92, and Fauja Singh, the “Turbaned Tornado,” who still ran marathons at 101. He said, “If something makes you happy, you’ll do it well.”

So to Kylah I might add, if running road or trail marathons makes you happy, then be happy. There are more dangerous things you could be doing than running, like not exercising at all.