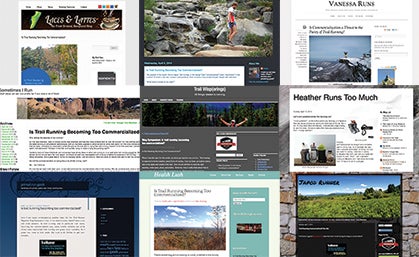 The April 2014 Trail Runner Blog Symposium topic of discussion was: Is trail running becoming too commercialized?

Here, you’ll find a few highlights from the entries we received this month. In our Editors’ Choice, Joe Granat of Health Lush shares his thoughts on why trail running, like beer, is meant to be shared.

Next month’s topic is: To be announced soon. See here for directions on how to participate.

***Editors’ Choice
Commercialization would be the unfortunate takeover of a small business which involved the over-saturation of advertising.  In other words, the big boys on the block are bullying the little guys and taking their lunch money.  Trail running has gained popularity; this does not mean we have lost our roots.
—Joe Granat, Health Lush

It’s trendy to speak out against commercialization but the truth is that most of us are not mountain hermits. We live in a society of mass consumerism and eagerly participate in that system. We love swag. We’ll take free stuff even if we don’t need it. Can we really compartmentalize our sport so it never touches our morning Starbucks, Mac laptops, or Amazon accounts? As avid trail runners, our job is not to keep the money out, but to keep this sport honest. So far we’re doing a good job.
—Vanessa Rodriguez, Vanessa Runs

I hope “commercial training runs” isn’t a growth industry, and I dread the day that every trail runner is viewed as a potential new client.  Recently, I went out on a group trail run and a women who claimed to be a personal trainer attempted to recruit the entire group for a series of non-competitive trail runs, for which she was going to charge a fee – and she was going to teach us all “how to do it.”  It was uncomfortable.  I don’t want to have to dodge groups of trail runners every weekend to avoid the annoyance of a sales pitch.
—Heather Wiatrowski, Heather Runs Too Much

While choices and options are good, we as consumers and stewards of trails and nature, must not allow this sport of ours to become just one big money making machine. Thankfully, like it or not, we do have the US government to keep the number of people on trails limited with the permit process. We do have people boycotting and standing up against races that are getting too big and ruining the environment. We must know when enough is enough, and we have to act with our words, but with our wallets as well.
—Emir Dedić, Japod Runner

For the average American, they see little to nothing about trail running. They, instead, are bombarded with fast food, beauty and hygiene, and entertainment ads. Fast food spends billions of dollars yearly on their commercials, it would actually be pretty wonderful if even half of that money was put into promoting something as healthy as our sport, trail running. Imagine how healthy, relaxed and happy so many more Americans would be if they just got out to a local trail a few hours a day?!
—Rachel Kelley, Trail (Wisperings)

Instead of worrying about what shoe companies, race management, and corporate sponsors have to say about trail running, we have to ask ourselves what it means to us … Nature offers us a way to disconnect ourselves from the synthetic stresses of life that our bodies still haven’t adapted to yet. For me, friendships have been forged, scars have been earned, and stories have been made to be told too many times. It can be as commercial as it wants. All I have to do is turn off my computer and find a trailhead.
—Jesse Scott, In Search of Solid Ground

For me, popularity is not going to taint this sport. At the core of trail running is a sport where a bunch of down to earth, motivated people just want to go out and race together in the woods. Despite more and more people joining us on the trails to challenges their bodies and hearts, it will still only attract driven, simple people. The rest will be weeded out over the long up and down hills of the race courses because the core of trail running is a pure love for being outdoors and of running.
—Jessica Kuepfer, Laces and Lattes

[The runner] who’s bought in to the “over-commercialization” of trail running is probably having a great time doing what they’re doing. And if someone is running on a trail — regardless of how much they choose to spend on their gear or their races — then they’re a “trail runner.” The big spender is just as much a “trail runner” as the 30-year veteran who longs for the days when they personally knew every other local runner, and all of them held the same views on “proper” running.
—Jake Wyatt, Sometimes I Run

There are certainly enough low key and local events around so that anyone can avoid something they deem commercial … and if that still isn’t your cup of tea, you can still slap on your running gear and just head out on your own.
—Geoff Spakes, Primal Run Geek