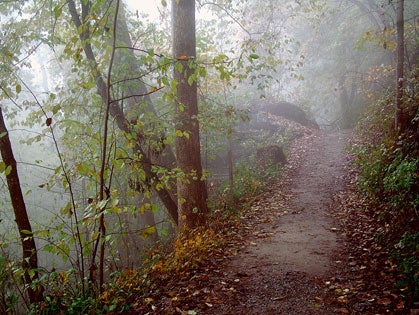 So, I spent some time amid the trees the other night. In the elusive sun and shadows, where turns beckon to exciting unknowns and quad-grinding grades turn to little-kid hurtling downhills in the blink of an eye. Where that large log across the trail causes you to contemplate, for a split second, whether you
still have enough of your old 400-meter hurdle skills left in you to jump straight over it, where a rickety bridge feels joyful rather than perilous, where a few bug bites are an easy price to pay for 50 mano-a-mano minutes with Mother Nature at her midsummer finest.

Yes, I went trail running (trail racing, no less), and so should we all. If, as Herman Melville says at the start of Moby Dick, you feel a “damp, drizzly November in [your] soul,” if the relentless sidewalk pounding has beaten up your knees, if the task-masterly monotony of the treadmill has driven you raving bonkers, then off the asphalt and onto the dirt you go, vite!

But I’ll trip, you say. I’ll get lost. It’s not even ground. It’s not marked. I’ll never get back. Ah, but you will. As the no-doubt trail running members of Semisonic once proclaimed, “Every new beginning comes from some other beginning’s end..” Trails can be daunting, they can be unmarked, and yes, you may lose your footing. But these are all solvable qualms, and the rewards are multiplicitous and worthy.

First of all, find yourself some trail-loving friends. They’re easy to spot. They’re chill, they’re friendly, they have dirt on their calves, passion in their eyes, and tales of 20-hour 100-milers over rock and desert up their sleeves. Most important, they love what they do, and they’re thrilled to help you love it, too. Join a group trail run (you can source them through local running stores or online boards), and proudly proclaim your newness. In the vernacular of the trail world, people tend to speak in hours (or loops) rather than miles, so if the majority of the group is doing, say, three 8-mile loops, you can jump in for one or two and no one will think less of you. (Trail running groups are, like the best 1960s communes, free-floating, accepting, and tolerant.)

Start out at a slow, even, pace, and let yourself settle into the new terrain. Yes, it’s bumpy. Nope, it’s never really going to “level out” or get not-bumpy. This, my friend, is the new normal. Embrace it. Attack it. Leap over it, buoyed by green leaves and oxygen. (You can breathe in here! Pine needles! Flowers! Inhale.) And, there’s Mr. First Hill. Wow. Large! No matter. You are Trail God/Goddess, and this is a mere appetizer for you, devourer of all topography. Lean slightly forward, keep your cadence even, and rock on up. Before you know it, you’re on the amusement-park-ride down which, depending on your predilection, is either the best part or slightly terrifying (or if you’re me, it’s both; I actually found myself yelling, “whoaaaa!’ like a cartoon character on a particularly spinning-out-of-control downhill recently). Be careful, but try and roll with the downhill grade rather than fight it. Take a moment to watch with awe the experienced senseis who can barrel down a tooth-jarring grade at full-bore sprint, rocks and roots be damned. This will be you someday, grasshopper. Patience.

Along the way, get out your mental paintset and capture the amazing scenery around you. Nary a car, traffic light, or errant delivery truck will mar your way. From the branch-cracking stillness of early autumn to the pristine golden light of a summer dawn, it’s yours to savor. And unlike many of your familiar road routes, it will never look the same way twice. Eventually, you will learn if you prefer to run on the dirt or the grass part of the trail, how to keep your root-detecting radar sharp, and how to welcome the hills the way you welcome that difficult-but-oh-so-entertaining relative at the family reunion. You will keep bug spray in your car, and sunscreen, and towels. You are sipping the trail running Kool-Aid, and it tastes oh so fine.

As it penetrates your bloodstream, you will divine the virtues of trail shoes, learn to appreciate the ingenious means of transporting your various essential beverages, and marvel at a host of other gear designed to make half a day on the trails sustainable. You may become even more brave, and in the best tradition of medieval knights throwing down for the joust, put your colors into the ring for a trail race. (They’re not all 100 miles long; my local Minneapolis running store, TC Running Company recently started a three-race trail series with nothing over a 10K distance.) At least at the very local level, you will not find gimlet-eyed age-group competitors eying each other up at the starting line of these events; rather, you will find pre-race encouragement, during-the-race cowbell, and post-race support, community, and often beer. (One must replace one’s carb stores, must one not?)

Best of all, you will have done it. You will have begun, as Thoreau said, “to live deep and suck out all the marrow of life.”

You will have jumped off the carousel of relentless work, pounding-crowded runs, and impact-related aches and pains, and found a soft landing in the welcoming and wondrous dirt.

Amy Clark continues to marvel at the amazing trails and trail people of the Twin Cities.