Shorter-distance specialist David Laney came in 3rd at the notoriously tough UTMB, through relaxed—rather than regimented—training 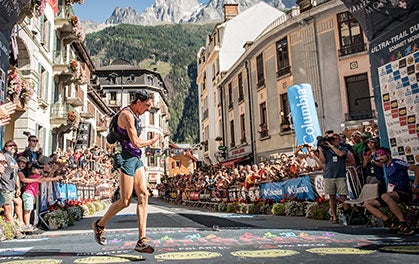 Laney, 26, of Ashland, Oregon, learned a lot about regimented, traditional training—intervals, tempo runs and long runs, week-in and week-out—as a collegiate standout and member of the professional Brooks-Hansons training group. Even as the 2:17 marathoner transitioned to trail ultras and trained for his first 100-miler, California’s Western States Endurance Run, in 2014, his training remained pretty traditional.

“I hammered every day, and emphasized mileage too much in my training,” he says of his buildup to Western States in 2014. “I didn’t understand that, training in Ashland, I was running a ton of vert, and that that could count toward mileage.”

He says he was “overcooked” going into that race, where he finished a disappointing 20th place, in 18:18:25.

UTMB is a highly competitive 103-mile race that loops through the French, Swiss and Italian Alps. It climbs 31,500 feet—substantially more than Western States—and passes over highly technical mountain terrain. So when Laney, just over a year after his first, unimpressive Western States run, took on UTMB, you might not have expected his prowess at track, road and shorter trail ultras to carry him very far.

Yet in the race’s late stages, as the sun came up on a Saturday morning in the Alps, Laney was passing runner upon runner. He and Montanan Seth Swanson made a late American charge that would put Laney on the podium in third place, just two-and-a-half minutes behind runner-up Luis Alberto Hernando. (Swanson finished fourth, about thirty seconds back.)

“This year I backed off the mileage and intensity a bit,” he says. “I understood how vert factored into training and counted it toward my mileage. Some long runs were longer, but I did fewer long runs overall.”

Arriving at the starting line fresh proved a savvier strategy. In the 2015 race, Laney finished eighth, in 17:01:37.

Two days later, he moved out of his apartment and into his car, which would carry him to the best training spots on the West Coast for the remainder of the summer.

“I got to go a lot of places that I’d wanted to see, and that I knew would be good to get ready for UTMB,” he says. “Places with big, steep mountains and technical trails.”

He traveled to—and trained in—places like the North Cascades in Washington and Bend, Oregon; ran with fellow elite Tim Tollefson in Mammoth, California; and worked at a running camp at Oregon’s Steen Mountain. He spent some time in Portland, and spent a week in the Wallowa Mountains, where he says the mountains “aren’t like what we normally have in Oregon. They’re huge and steep, with big glacial valleys.”

With no fixed base camp, Laney could seek out the trails that best mimicked his goal race. He logged huge vertical gains (as he did on this run with Tollefson) and focused on the finer points of UTMB-style running, like moving fast on long, technical downhills.

He also adapted his training to practice running through fatigue, bonking and dehydration; he would purposely go on long runs with too-little food and water, and occasionally doubled up on activities, such as running after hiking up a mountain. He reasoned that this would give him a psychological edge during the race, when he would inevitably become fatigued with many miles and hours still in front of him.

“My pack wasn’t that big, so after a few hours I would be out of water and food,” Laney says. “It was good to get used to feeling depleted with three hours to go, for example.”

Through it all, he began to emphasize time on his feet and quality metrics such as vertical gain rather than specific mileage goals or scheduled speed workouts. “When I’m training for a marathon, I have every day planned,” he says. “This was a more relaxed approach, even though there were still a lot of really hard days.

“I worried less about workouts,” he continues. “I might have done two in the whole buildup. The emphasis was on spending time running, and getting tired.”

The last bit of specificity came when Laney arrived in Chamonix, 12 days ahead of the race—too close to the pre-race taper to do much volume, but enough to get some quality time with the fierce vertical profile surrounding the start and finish of UTMB.

Whether his new approach to training would pay off would be determined by the unforgiving UTMB course, a 103-mile loop that tends to expose even the strongest runners’ weaknesses and training deficiencies.

Laney says he arrived at the start feeling rested and “better than I’d ever felt.” He also admits he wasn’t sure what lay ahead of him. “I felt kind of blind going in, but that also meant I was pretty relaxed.”

Perhaps his best strategic move was to give himself a chance to race at all. “[Someone] told me to not even think about racing for the first 50 miles, then wait 10 more miles” before hitting the gas, Laney says. “I knew so many guys are walking in the last 20 miles, I figured if I can get to 50 miles with fresh legs I can pass a lot of them.”

After his conservative start, Laney found himself outside the top 40 a couple hours into the race. At halfway, he was still well outside the top 10. Yet with a few kilometers and one big climb to go, he was in fourth, and closing on both Swanson and Hernando. He finished a close third to Hernando, in 21:59:42.

Laney’s next focus will be the U.S. Olympic Marathon Trials in Los Angeles in February. Will the veteran marathoner bring the freewheeling training style that won him success in France to his typically stringent marathon prep?

“That’s a good question,” he says. “I’ll probably keep it pretty traditional, with workouts and mileage. But my biggest takeaway from this year is definitely that I’ll be more chill about it.”

After that, he plans to take his third crack at Western States in 2016, and then spend the summer in Chamonix, training for next year’s UTMB.

“I want that race really bad,” he says.

In other words, look out.