The Florida native ran 292 blisteringly hot miles through Death Valley, with a stopover on the highest point in the contiguous U.S. 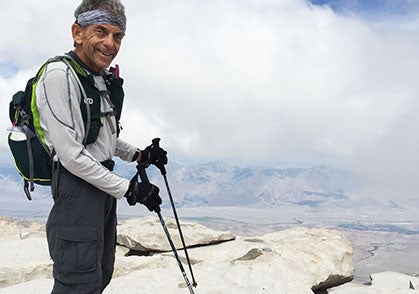 Bob Becker on the summit of Mount Whitney, the midpoint of his 292-mile Badwater Double. Photo by Kevin Grabowski

At 3:25 p.m. on July 31, 70-year-old Bob Becker reached the 14,505-foot summit of California’s Mount Whitney, the highest point in the continental United States. He posed for a few pictures and scrawled his name in the summit register, but didn’t stay to celebrate. He had been running for the past 67 hours and 25 minutes—and he was still only halfway.

Becker, who lives in Fort Lauderdale, Florida, and directs several trail and ultra races in the state, was attempting a Badwater Double. The Double is a 292-mile out-and-back through Death Valley, from Badwater Basin—North America’s lowest point, at 282 feet below sea level—to the summit of Whitney and back.

He started on July 28 with the 96 other runners attempting the Badwater 135 race, and would end almost a full week and 292 miles later, right back where he had started, with a few blisters a new course record to show for it.

Becker ran his first marathon at age 57, at the urging of a friend. He figured it would be a one-time deal, but wound up doing well: he qualified for the Boston Marathon.

“I figured, I have to do Boston, too, now,” he says. “I began training with a group of much faster runners, which became a strong social and inspirational factor in my life. I loved running and the competition that it provided.” 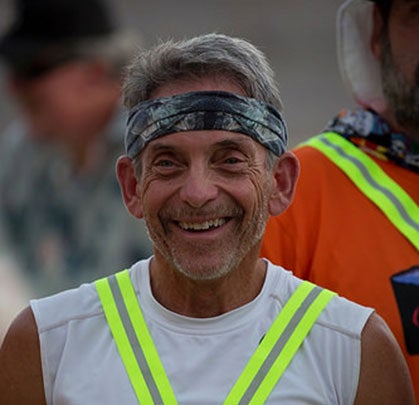 Becker before the Badwater start. Photo by Roger Burress

A few years later, a friend asked if he knew about the Marathon des Sables, a 156-mile stage race in the Moroccan Sahara. Becker had never even heard the term “ultramarathon” before.

“I did a little research, and the next week I came back and said ‘don’t you have a birthday soon ending in a zero?’ ” he says. Becker’s friend would soon turn 40, and Becker himself was about to turn 60. “I figured Marathon des Sables would be a good way to celebrate.”

“Celebrate” they did, in the 2005 race, though Becker developed a fracture in his femur and was pulled at mile 115. But he left more passionate than ever. “The camaraderie, mutual support and positive vibe were totally addictive,” he says.

Two weeks later, he had surgery, followed by eight months of recovery. Then, in January 2006, just a few months after his return to running, doctors discovered prostate cancer. Another surgery, in March, removed the tumor. A month later he flew to Tanzania to climb Mount Kilimanjaro. That August he ran a 50-miler near Grand Teton National Park and, as he puts it, “was back in the ultra game.”

The first official Badwater race, in 1987, went from Badwater Basin to the summit of Mount Whitney, 146 miles in total, the first 135 miles on road and the final 11 on trail. In 1989, race founders Tom Crawford and Rich Benyo became the first two people to execute a “Double”—a two-way crossing, 292 miles in total.

Since, some 30 people have completed a Double and three have even completed a “Quad”—four back-to-back crossings, pioneered by Marshall Ulrich in 2001. A few have even completed the route solo, without a support crew. Though the official Badwater 135 race now finishes at the Whitney Portal trailhead, Double, Quad and solo runners continue to pay homage to the original 146-mile course.

Becker was introduced to Badwater in 2007, when he crewed for a friend. “I began learning about the extensive history of the race and other groundbreaking Death Valley crossings, and was fortunate enough to meet a number of the elite runners who have competed there,” he says. One of those elite runners, Lisa Smith-Batchen—who herself has completed a Badwater Quad, and won the Marathon de Sables and (twice) the Badwater 135—became Becker’s personal coach for his own Badwater run in 2008. “I just loved the extreme nature of the beast—the distance, the heat, the altitude,” he recalls.

So, when it came time to ring in his 70th birthday, Badwater immediately came to mind. “I wanted something unusual and challenging to celebrate,” he says. Until 2015, the oldest person to complete the Badwater Double was 57. Becker wanted to break that record. 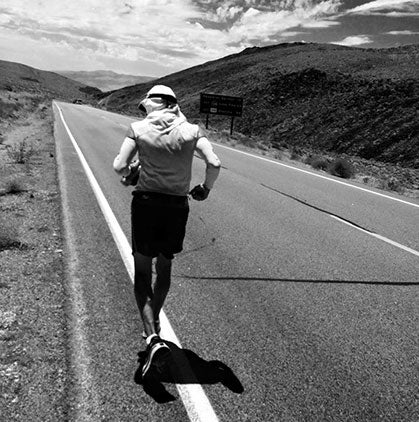 Becker knew that the Badwater Double would involve much more walking than the average race. He also knew that he would have to contend with hills and high elevation—neither of which exists in his southern Florida home base.

Coached again by Smith-Batchen, Becker simulated hills by dragging a tire for five or six miles at a time. He ran laps on the longest bridge in Fort Lauderdale, power hiking up and running back down, over and over again, for up to 25 miles. He also field-tested different foods to find the right nutrition plan for the exceptionally hot environment of Death Valley in July, eventually settling on a mostly liquid diet of milk-chocolate Ensure, gels, water, Coke and the occasional bag of chips.

Come race day, Becker had no doubts about his preparedness. The first challenge was to run the actual Badwater 135 within the 48-hour cutoff. He finished after a mostly uneventful 41 hours 30 minutes.

“It was the slowest of all three times I’ve run Badwater,” he says with slight remorse. “I didn’t want to come in dead last, but I knew I had to conserve energy.”

After partaking in post-race festivities and nabbing a few hours of sleep, Becker began the climb up Mount Whitney.

“I had summited Whitney twice before, but both times I had altitude problems,” he says. “The first time, I got awful headaches, and the second time I had equilibrium problems. Even with hiking poles I couldn’t keep from falling over!”

This time, Badwater veteran Ulrich advised him to take Diamox, an altitude medication, the night before the climb. The medication worked and Becker had no altitude issues, but was plagued by severe blistering on his left foot and exhaustion—he had slept only three-and-a-half hours. As a result, progress was slow, and he reached the top late in the day. He signed the register, took a few photos and turned right around.

“Reaching the summit was a huge relief, as I had expected it to be the most difficult part of the entire experience,” he says. But the descent would be the real challenge. As the light faded, the poorly marked trail, difficult to follow even in daylight, became nearly impossible to navigate. Becker and a crew member who had been with him for the first 135 miles and paced him to the summit, were both semi-delirious. Neither could think about much else but the few feet in front of them.

Becker’s other pacer, Don Nelson, was fresh, though, having only joined them at the Whitney trailhead. “It was Don’s leadership and navigation skills that got us down that night,” Becker says. “For that I’m forever grateful.”

Becker checked into a hotel and slept for six hours. He woke up relatively refreshed for the return trip to Badwater Basin. “I was tremendously buoyed by a surprise send-off at Whitney Portal,” he says, where he was greeted by Dr. Ben Jones, a legendary three-time finisher known as the “Badwater Mayor”; Scott Wall, a California Highway Patrol officer who supports the race every year; and Bradford Lombardi, another Badwater finisher and a friend of Becker’s. “Blistered feet were the enemy,” says Becker. “Otherwise I would have danced all the way back to Badwater!”

In fact, for the final 135 miles, blisters were the least of his concerns. A strong wind picked up radiant heat from the sand and rocks, pummeling Becker with searing-hot air that “felt like a blast furnace in my face,” he says. “I couldn’t stand up straight.” The wind only worsened as he gained on Badwater Basin, turning the last 17 miles into a battle.

“I hugged that sign big time,” he says. “I started crying like a baby. It was very emotional to be able to accomplish [the Double] and know that while I was beat up and my feet were blistered and hurting, I was perfectly healthy.”

Now that the Double is done with, Becker is not sure if he will return to Badwater. If he does, it will be to crew. For now, he is happy to have ticked every item off his bucket list. To others considering an extreme challenge like Badwater, he says, “Don’t let age get in the way of creating a goal and going for it.”