An even field on an uneven course 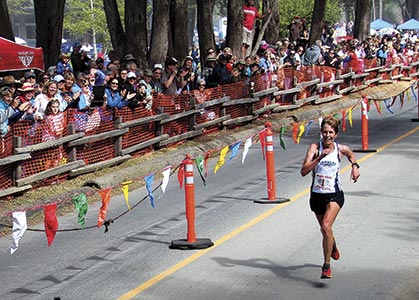 Diana Fitzpatrick in the finishing chute of the 104th annual Dipsea Race. Photo by Pam Wendell.

By the time I crossed the starting line in downtown Mill Valley, California, nearly 600 runners of varying ages and abilities were already ahead of me: clambering, bounding and shortcutting their way toward the finish line at Stinson Beach.

I hadn’t missed the start (as I’ve been known to do from time to time). Nor was I suffering the clogged-artery effects of an oversized corporate road race. In fact, the 104th annual Dipsea Race was going exactly to plan.

There are various reasons why one might want to run the Dipsea, the oldest trail race in America and one of the oldest foot races in the world, with a long history of heroic wins, epic duels and an occasional trip to the hospital.

The seven-mile, point-to-point dash follows one of the most beautiful courses in existence, a Northern California tour that can be summed up as two big climbs and two big descents, with several potential shortcuts to reward those who have done their research.

The race’s great history includes legends such as Jack Kirk, who competed in 67 consecutive Dipsea events, the inclusion of women competitors dating back to 1918, and even a 1986 Hollywood film adaptation of one runner’s obsession with the race.

None was the main reason I wanted to run the race, famous also for an arbitrary and whimsical entry process (I decorated my registration envelope brightly and, as suggested on the race’s website, stuffed it full of money in excess of the entry fee). The reason I wanted to run the Dipsea could be read going down the results page from years and decades past. The winners were:

There was no male winner. No female winner. No age groups. The Dipsea Race has an open field and a unique handicapping system, which means that the winner is the winner, period. And that all but a small handful of men in their 20s are rewarded with a handicap of up to 25 minutes.
When, upon arriving, I had casually mentioned to an older runner that at age 33 I wasn’t sure I deserved a full minute lead on the men in their 20s, he wagged a finger at me, saying, “Don’t question the handicap!” He laughed, but I could see he believed in it.

“This race isn’t a measure of speed,” he continued. “It is a measure of human will and determination.”
And so I crossed the starting line 24 minutes behind the 72-year-old Melody-Anne Schultz, 19 minutes behind 9-year-old Taylor Hill, and one minute ahead of all the young and hungry 20-something bucks.

I leapt off the starting line alongside my friend, training partner and fellow age-grouper Galen Burrell. We climbed up nearly 700 steps, then down a dusty trail into the dark underworld of the Muir Woods redwood groves: yelling, always yelling, “Left, left! On your left, left,” to pass racers. We climbed over a thousand feet to an exposed and often sweltering ridgeline where, if one were inclined to look around, Oakland, San Francisco and the vast Pacific Ocean were spread out in an array below. We, however, had by then managed to pass all but the top 10 runners, and were focused on the harrowing plunge down a thin, serpentine trail to the beachside finish line, nearly three miles away.

We flew down the trail. Spectators called out our places, letting us know where we were as we ticked off runners one by one.

On a rare bit of pavement I squeaked past Galen, and then veered around 50-year-old Sissel Berntsen-Heber.
Now running in second place, I knew neither who nor how far ahead my competition was, try though I might to listen for cheers ahead that might offer hints.

I sprinted across the finish line, to see, waiting for me, the 56-year-old Diana Fitzpatrick, mother of two and herself a three-time Olympic marathon trails qualifier. She was the runner with the most will and spirit on that warm June day.

She embraced me, as I savored the humility of coming in second.

Rickey Gates is looking forward to a 24-minute handicap. This article originally appeared in our October 2014 issue.