Should safety gear be mandatory at trail races? 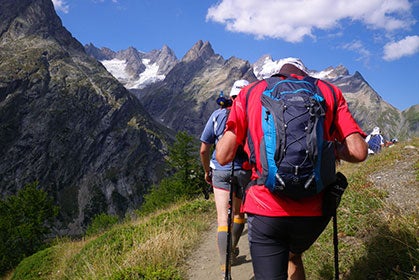 When runners set out for the inaugural Castle Peak 100K, a mountain ultra in the Tahoe National Forest, on August 29, they’ll have to carry several items required by the organizers, including a rain jacket, a cell phone and a specified minimum amount of water and calories.

While developing the new event’s rules, the race directors—like all directors of tough trail events—faced a couple of questions with no easy answer: Should runners be required to carry certain pieces of gear for safety’s sake, or should that gear be merely recommended? Furthermore, if gear is required, then how should that rule be enforced?

The Castle Peak 100K will feature extra-long stretches between aid stations, and runners will be solo because no pacers are allowed. Given the mountain’s fast-changing and potentially extreme weather conditions, the organizers reasoned that runners should be obligated to take certain safety precautions to reduce risk. Spot checks for required gear and time penalties likely will be used to enforce the requirement, although the organizers are still working out the details.

“We’re not trying to copy what is done in Europe” where ultra-distance mountain runs impose and sometimes rigidly enforce detailed gear requirements, says event director Peter Fain of the Donner Party Mountain Runners, the group organizing the race. “But what we are doing is providing a safer environment for runners who won’t have support.”

Requiring gear at trail races rankles the likes of Eric Schranz, host of UltraRunnerPodcast.com. He values runners having the freedom to make choices about how to take care of themselves during a long race; for example, he’d like runners to be able to choose whether to play it safe by carrying a headlamp all day, or risk going without a headlamp and run fast to beat the nightfall.

“To take away that element of self-reliance by requiring gear really detracts from the ethos of ultra trail running,” Schranz says. “I fear that RDs will make these non-required concessions to the Forest Service and insurance carriers, and sooner than we know it, mandatory gear lists will be required for permitting races.”

But other runners don’t mind mandatory gear—some, like ultrarunner Terry Miller of Denver, actually like the requirement. “The race is at least somewhat trying to simulate actually making that journey on your own, and of course you’d have to carry all that stuff” if you were, he says.

Miller adds that making everyone carry the same amount of minimum gear also helps level the playing field. “The fast kids will have crew waiting at every aid station and will get there in an hour and a half, whereas it might take my fat butt three hours or more to get to my drop bag. That extra pound of [required] gear makes them at least pretend they’re doing the same race as I am.”

The ways that trail races mandate gear here in the United States and abroad are nearly as varied as the races themselves.

At the 11-mile Twin Mountain Trudge near Laramie, Wyoming, in the deep snow of February, the required gear includes a fire starter and long pants. All racers have their gear checked before the start, but not at the end.

“I think most runners would realize the foolishness of dropping any safety gear or required food or water,” says race director Sandra Biller. “It’s very possible you’re going to need the gear, and dropping anything won’t significantly affect your performance. I’ve never heard of anyone trying to skirt these requirements, although a runner would risk disqualification by doing so.”

At the Fort Clinch 100 Mile Endurance Run in Florida, severe heat and humidity pose a danger, so race director Caleb Wilson requires each runner to carry a water bottle or hydration system. “Honestly, I wish we didn’t have to put gear requirements in the rules,” he says. “I am all about personal accountability; I love the free-spirit atmosphere of trail and ultrarunning.”

Unfortunately, adds Wilson, “it’s just not realistic anymore to expect everyone to think things through. We live in a society that loves to sue. Everyone loves to blame everyone else for their own stupidity and inexperience. As more and more people flock to the sport, you naturally will have more folks who overestimate their ability as a runner.”

Unlike easier ultras, the venerable Hardrock Hundred Mile Endurance Run in the San Juan Mountains of Southwestern Colorado, with a motto of “wild and tough,” bucks the trend toward mandated gear.

The “What to Bring” section of Hardrock’s runners’ manual lists several recommended items and warns, “Think in terms of being stuck—if you are forced to spend extra time out in the weather, you will be much better off if you have carried extra clothing or a space blanket to help you keep warm.” Ultimately, however, it’s left to the runner to decide what to carry. The race organizers neither check for gear nor penalize for lack of it.

Hardrock, however, has strict qualifying standards, which weed out inexperienced runners. Participants can be expected to know what it takes to endure extreme mountain conditions.

Overseas, gear requirements are the norm at high-profile ultras, but the rules vary in detail and implementation.

The Tarawera Ultra in New Zealand takes a relatively flexible approach, listing three levels of compulsory gear, and the race director announces the day before which level will be mandated based on the weather forecast. The levels are (1) no required gear; (2) a waterproof jacket; and (3) a long-sleeve base layer, pants, a waterproof jacket and a head covering for warmth. Random spot checks along the course are conducted for enforcement.

By comparison, the Transgrancanaria 125K on the Canary Islands mandates several items, such as a headlamp, a red rear light and an emergency blanket. These requirements and their stringent enforcement came under scrutiny in 2014, when race officials temporarily disqualified the winner, Ryan Sandes of South Africa, for failing to produce a Mylar space blanket at a checkpoint. (His win was reinstated when it came to light he actually had carried the blanket.)

Whether and how race officials will enforce the rules can lead to stressful dilemmas for competitors, as champion ultrarunner and adventure racer Travis Macy details in the prologue of his soon-to-be-released book, The Ultra Mindset.

In the 2014 edition of the 65K Ice Trail Tarentaise in the French Alps, Macy pushed hard to get to third place with five miles left to go. Descending from the snowy slopes, he took off his jacket and Kahtoola NanoSpike traction devices and stuffed them in his pack—but failed to zip it all the way. About a mile later, he realized the crampons had fallen out.

“This was where I had my internal debate about lost mandatory gear and rules, and, in a larger sense, about right and wrong,” Macy writes. He describes how the race organizers had made a big deal in the briefing about requiring crampons and other gear. So Macy turned around and hiked up the hill until he found and reclaimed them, losing nine minutes and getting passed by others in the process.

In the end, he finished sixth instead of third. While he ultimately made peace with the outcome, he second-guessed his decision to follow the rule to the letter. At the finish line, he recounts, “there was no gear check, no stern-faced officials with clipboards going through bags to ensure compliance … There I was in the midst of the festivities, an unsettled figure who had made a questionable choice. I felt like a philosopher in an existential crisis.”

Longtime ultrarunner and race director John Medinger notes that at the 170-kilometer Ultra-Trail du Mont Blanc (UTMB) in the European Alps, the gear rules can get “a bit silly” because many participants technically satisfy the requirement but essentially defeat its purpose. For example, Medinger says, the race requires all runners to have a mobile phone, but “nobody wants to risk ruining their $500 iPhone, so everybody buys a 25-euro ‘burner’ phone. The problem is nobody is at all familiar with that model, so nobody knows how to use it. Mine had 30 minutes pre-paid, and I tried to use it after the race but never did successfully complete a simple phone call.”

Similarly, he adds, some UTMB participants meet the requirement of carrying a safety whistle with one so tiny “you can’t hear it from 20 feet away.”

Nonetheless, Medinger sympathizes with the UTMB organizers’ intentions, given that the race attracts more than 2,000 runners, some of whom are not well prepared for high mountains, where a lack of protective gear in severe weather can be life threatening.

“As a runner, I’m a typical independent-minded American who doesn’t like somebody issuing requirements that tell me what I have to do, even when it’s in my best interest to do so,” says Meginger. “As an RD, I can understand that it might be wise to issue such requirements in certain kinds of races. As the lawyers say, it’s all facts and circumstances.”

Sarah Lavender Smith is a Contributing Editor at Trail Runner who once had to carry a signaling mirror, compass and knife as required gear in a desert ultra. She also carried duct tape, which was recommended but not required. When she fell and punctured her plastic water bottle, the duct tape—which patched the hole—saved her race.