In praise of the worn-out and comfortable 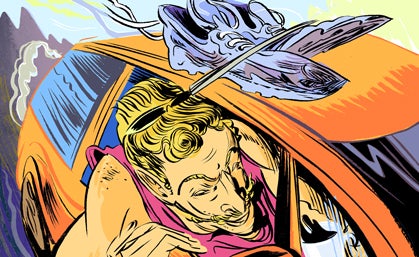 Your shoes,” he said, with a roll of the r and a sing-song Italian accent, “they cannot come in the car with us.” It was a reasonable request. In the three months prior, my faded shoes had trodden in or on a flooded cow pasture in Switzerland, low-tide mudfields along the Alaskan coast and what may or may not have been a melting Baby Ruth candy bar. A bouquet of scents emanated from the shoes, and whether on my feet or off, they were no longer welcome in civil company.

Marco and I had just returned from a run along a jagged ridgeline that marked the natural border between Switzerland and Italy, where he and several generations before him had been raised, made families and grown old.  We paused as he pointed out trench lines and barracks from WWI. He also pointed out a receding glacier and where its terminus used to reach, then the paths of landslides and avalanches.

As I contemplated this natural erosion and the force of entropy on the earth around us, my reverie was interrupted by the solid stench of my shoes wafting up into my nose.

I first met Marco six years earlier at a race near the French border. For my first summer of racing in Europe, I had saved up enough money pouring coffee at an Italian-themed café in Boulder, Colorado, to pay for a plane ticket, a pair of shoes and not much else.

That summer he coached me through certain phrases that I imagined a real Italian barista would say. When I returned to the café in the fall, I adopted Marco’s accent and served coffee with an abundance of Italian enthusiasm.

People loved it. I earned more tips. And paid for another pair of shoes with a stack of one-dollar bills.

Back then I had a relationship with my shoes that only a person who pays with one-dollar bills can understand. I wrote the date of purchase on the sides of the shoes the moment they came out of the box. I kept track of miles—500 … 800 … sometimes up to a thousand miles. Eventually, I’d put them aside—soles balding, threads unraveling and stench increasing.

After the break-in period, I grew to love each pair of shoes. How they kept getting more comfortable. I felt a connection to them, saddened a little when I’d have to start a new relationship all over again with shoes that were out of the box, hospital-white, with that whiff of petroleum. Fifty miles, 100 miles later, as the white collected the earth’s palette and the fabric took on barbs, thorns and burrs, only then did they feel like my shoes.

Following a couple of years of successful racing, I achieved that first level of sponsorship that means more to an athlete than any to follow. I received my first pair of free shoes. In the five years since, I stopped writing the dates on shoes and stopped keeping track of their miles. I had in my closet the incredible luxury of backups, backups for my backups, several different models and different colors of the same model.

Yet in the months leading up to my run with Marco, all attempts at a rendezvous with a new pair of shoes somehow warranted themselves useless and so the same old pair traveled with me to Alaska, Colorado, France, Italy and Switzerland.

I stood outside of Marco’s car holding my shoes far away from my nose. I looked around at the decaying forts, glaciers and mountains, took in this moment of deterioration and appreciation.

Then we drove away with my shoes on the roof of Marco’s car, checking periodically behind us to ensure that they hadn’t fallen off.

Rickey wouldn’t mind getting a new pair of shoes.