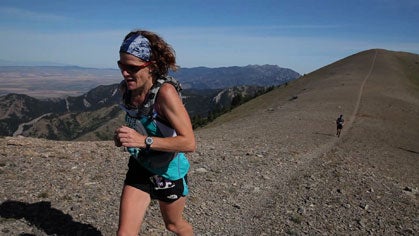 The documentary film Finding Traction is a rare and revealing look at the life of extraordinary ultrarunner, Nikki Kimball, as she attempts a speed record on Vermont’s 273-mile Long Trail. Emmy-award winning filmmaker Jaime Jacobsen captures every step of 41-year-old Kimball’s journey, from her training runs along the rugged trails of the Rockies, not far from her Bozeman, Montana, home, to her courageous attempt at the record in the Green Mountains of Vermont, not far from where Kimball grew up. The film crew shadowed Nikki Kimball for four days and nights during the week of August 13, 2012, as she attempted to become the fastest person (male or female) to run the iconic trail.

Nikki Kimball has been making strides in the sport of ultrarunning for years. A three-time winner of the U.S. Track & Field Ultra Runner of the Year Award, she has won countless races over the span of her professional running career, including the pinnacle of ultrarunning, Western States 100, which she has won three times.

But Kimball doesn’t run for wins or records alone, rather to bring attention to the extraordinary feats of professional female athletes, and to encourage a new generation of young women to chase their dreams. “Running has given me so much in terms of overall health, self esteem and happiness, and now I’m at a point in my life when I can give back to the sport,” says Kimball. “I used the Long Trail expedition to raise money for Girls on the Run Vermont. I’m hoping the film will inspire others to run and hike and discover the benefits of physical activity.”

Filmmaker and friend Jaime Jacobsen believes that Kimball’s message extends beyond the world of running: “I hope that, beyond inspiring women to consider sport that pushes their own limits—either against themselves or their male opponents—it inspires women in general to pursue their dreams.”

Kimball has not only overcome the obstacles on the trails, but also a longtime battle with depression. “I’ve been physically active all my life and battled depression all my life. Endurance sports is one of the best ways I know to combat depression,” she says.

Finding Traction captures the peaks and valleys of Kimball’s trek, as she races against time and the terrain, in an attempt to make history on the Vermont Long Trail.

For a sneak peek of the film Finding Traction, click here.

Finding Traction is set to broadcast on PBS and in film festivals across the country beginning in the summer of 2013. But they need your help, to spread the word, and raise funds to finish the project. For more information, visit their website and Twitter page.