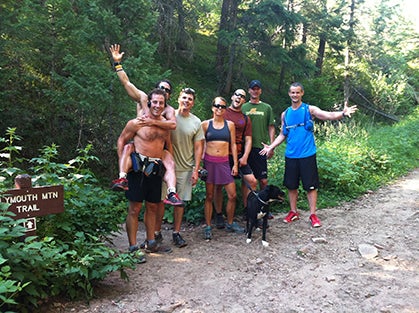 This bunch of self-proclaimed mud-splashing, beer-swilling, music-loving mountain hippies has been running as a group on the trails of Colorado’s Front Range since 2011. Mike Hurd, one of the founding members of Trails, Tails & Ales (TTA), is the informal curator, prodding his fellow runners each week to choose the location and distance of the run. It’s a job that Shannon Wojcik, a member of TTA since day one, likens to herding cats.

The group, which now has 119 members, grew from a handful of runners who split away from their former pay-to-play running club.

“We didn’t want to pay to be in an organized running group or start at a specific time or have one person dictate what we were going to do,” says Hurd, whose vision was to keep things simple. “We have no rules, qualifications, restrictions, membership fees or expectations. In fact, there is only one certainty you can count on: We will be out on a trail every Saturday morning, year-round, day, night, rain, sleet, snow or shine.” The club communicates mostly via text messages and Facebook, and sends out maps of upcoming runs drawn, Hurd boasts, “100-percent freehand on Microsoft Paint.”

The runners, which number from three to 20 on any given outing, meet on the trails on the outskirts of Denver once a week for a no-frills romp around Mother Nature’s playground. They welcome runners of all ages and abilities. “There’s no demographic to us,” says Hurd. “The big thing is not emphasizing PRs, but just going out in the woods and having a good time.”

Newcomer Joey Licata says, “I showed up to TTA a little over a year ago not knowing a soul and was immediately accepted as a member of the pack.” TTA includes members who have completed ultramarathons as well as folks who show up once every few months.

“There is no difference between the runners who run the Leadville 100 and others running their first 3-mile trail run. You will never get judged but you will probably be lovingly made fun of,” Licata adds. 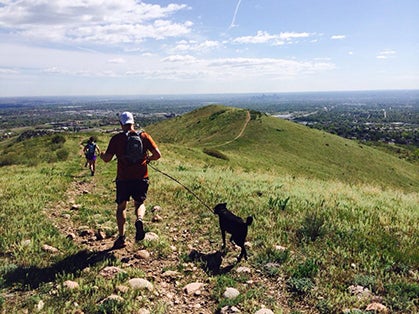 A staple on any TTA excursion are canines. Dogs have been known to outnumber humans on some runs, and Hurd’s dog, Lucy, a three-year-old lab-pit mix, has accompanied him on runs as long as 18 miles. “I think Lucy is the mascot of the group,” says Cheryl Colby, who has only been running with TTA for a few months. “She can go out and run more miles than me!”

If this group is fond of its pooches, it is equally fond of its drinks. TTA runners bill themselves as hooligans and beer enthusiasts, and TTA runners can often be found post-run downing bottomless mimosas at the Vine Street Pub, or sampling beer at the Coors Brewery.

Hurd says that some of the most memorable runs with the group have happened in the winter months when the weather is so bad the runners stagger back to their cars shaking and covered in icicles. One TTA member, Ted Archuleta, broke his foot on a snowy run in February. He had to be carried several miles to the trailhead, but, after reaching the car, didn’t hesitate to accompany his pals to the Cannonball Brewery for half-a-dozen beers before going to the hospital to have his foot examined.

TTA-affiliated runners have run the Bear Chase Trail Race and Colorado Relay, and paced each other in the Leadville Trail 100. They have run in Wales and Uruguay and along the coast of Scotland. But, through all the travels and all the races, the fundamentals of the group have stayed the same. “[It’s] a group [that] enjoys being outside, appreciates nature, and most of all, appreciates each other,” says Colby.

Want to find a trail-running club near you—or add yours to our directory? Check out our Trail Club Finder!