Michigan runners prove trail running has a home in the Midwest 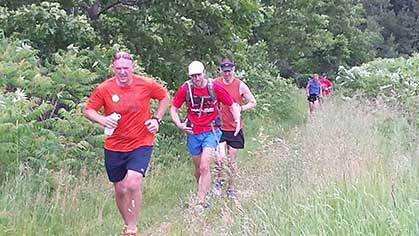 Cradled between the Great Lakes, far from conventional off-road meccas like Colorado, Washington and Tennessee, a trail-running club is flourishing in Grand Rapids, Michigan.

The Dirty Herd, started in 2009, takes to the trails of western Michigan every Sunday, and Rob Andro, 43, of Grand Rapids, (known as Dirty Rob by fellow Herdsters) is its main man. He has cultivated a no-experience-necessary club that welcomes all skill levels. “On any given run you will see the 6:30 miler clapping and cheering for the 12:00 miler who walked half of the trail,” says Andro. “It’s really fun to see.”

As Michigan is one of the top three apple-producing states in the country (claiming the apple blossom as its state flower), it’s only fitting that the Dirty Herd’s weekly runs take place at a century-old apple orchard and cider mill, Robinette’s Apple Haus. The fragrance of fermenting apples may offer a sweet distraction during autumn time runs, but don’t think the Herd’s training grounds are soft. “[The] trail is nearly five miles of brutal switchbacks, ascents and descents, and may be the most difficult trail to run in town,” says Andro.

“Our area was formed by glaciers, so it’s quite hilly by Michigan standards,” says Angela Butterfield, 49, of Ada, Michigan. In fact, one of the Herd’s favorite trail-running locations is the Canonsburg Ski Area, home of a six-mile trail that takes on an imposing downhill ski slope.

Butterfield, a Dirty Herd Runner for three years, says that the friendly nature of the Herd is what makes the group so attractive, and that she often sees the exchange of running advice and racing tips between members. Cooling off in rivers post-run and give-and-take banter with mountain bikers on shared trails are standard during Dirty Herd outings.

With weekly runs that draw 20 to 60 people (and 1,290 members in their Facebook group) this inclusive philosophy manifests itself in a strong following. The Herd also hosts a Fall and Spring Classic—untimed fun runs of up to 300 runners—which feature a handful of running vendors who supply the Dirty Herd with shoes to test. “In 2011 we were awarded The North Face Never Stop Exploring Award because of our Fall Classic and our drive to get more people outside,” says Andro.

The North Face Never Stop Exploring Award is a grant given to a nonprofit organization that encourages community and family involvement in the outdoors.

While the harsh winters and balmy summers would scare off some outdoor enthusiasts, the Herd can be seen on the trails in all conditions. “My most memorable run was last Christmas Eve morning,” says Andro. “We had a big snow and ice storm a day before so everything looked like it was painted white. We got some very cool pictures of our bright, multi-color gang running through this completely white landscape.”

“[It was] something from a Christmas card,” says Karasinski. 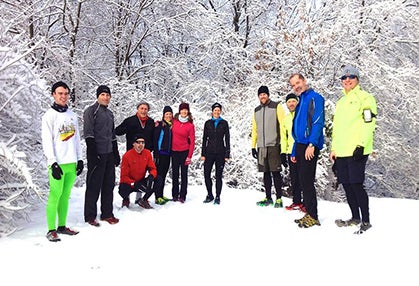 The Dirty Herd on a magical Christmas Eve run. Photo by Julian Kuz.

The Dirty Herd shares its off-road stomping grounds with its sister club, the West Michigan Trail Runners (WMTR) which was formed in 2012 by Andro because of increased local interest in trail running. The WMTR meets every Tuesday, Thursday and Saturday and emphasizes a belief similar to the Dirty Herd of fostering a trail-running community in the Grand Rapids area. Karasinski describes the WMTR as “a weekday version of the Dirty Herd with beer.”

“Both the Herd and the WMTR just want people to get outside and enjoy nature,” says Andro.

Planning to visit the Grand Rapids area? Here are a few local spots that the Dirty Herd recommends:

Want to find a trail-running club near you—or add yours to our directory? Check out our Trail Club Finder!