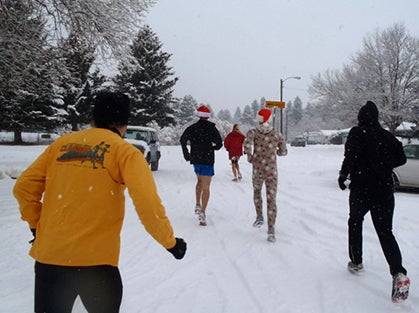 In 1973, at a restaurant in Bozeman, Montana, three men, Frank Newman, Andy Blank and Ed Anacker, with waitress Shelley Hoyt as witness, drew up a charter on a paper napkin. The paper napkin would hold the beginnings of Bozeman’s first structured running organization, the Big Sky Wind Drinkers—named after the wild horses that once roamed Montana’s plains.

“Although physical fitness is the aim,” the charter stated, “it is recognized that individuals will differ in their prowess and adroitness as runners. Therefore, it is not important how fast one runs but that one runs.”

Newman, Blank, and Anacker were all professors at Montana State University, explains longtime member and Bozeman resident David Summerfield. “Ed Anacker’s wife was in support of the club, so she was recruited to bake chocolate chip cookies for all the events. Stella [Anacker’s wife] never disappointed.”

Even the “Fun Runs,” weekly running meet-ups that go from one to five miles, continue to end with good food. While the club leads upward of 100 people on the fun runs, the community remains close-knit.

“Those of us who live near one of the runs usually put on a potluck dinners afterward,” Summerfield explains. Pizza parties and BBQs are also a common theme.

“I should say most of us count these runners as our best friends,” says Summerfield. “College professors and administrators, people from the new wave of high-tech businesses that have sprouted up here, teachers, college kids and retired people,” he adds. “Our runners are from all walks of life.”

Lisa Verwys, 28, describes some of her fellow members, “the regulars”—Leonard, a man who wears shorts year-round despite the cold Bozeman winters; John, who pushes his son in a stroller as he runs; and the Matsuda sisters, known for their friendly, positive attitudes.

Jennifer Sheets, a member of the BSWD club for just over a year, has also found a sense of community in the weekly runs. “When I was relatively new to the group, I started out on a race alone but ended up running and chatting with a Wind Drinkers veteran. He was a personal coach who spent 45 minutes giving me tips on running the treacherous Bridger Ridge race and how to prevent injuries. It was a priceless run!”

The Bridger Race, along with races like the Old Gabe 50K and the Devil’s Backbone 50 miler, are just a handful of the races the club hosts each month. In addition to the races, their fundraising and volunteer efforts are particularly noteworthy in the local community. “The BSWD puts on the Huffing For Stuffing Thanksgiving Day Run, which is a huge fundraiser for our local food bank,” says Sheets. The club also fundraises for a variety of local organizations, such as the Gallatin Valley Land Trust, the Gallatin Valley Food Bank and the Bozeman Track Club. In 2013, the club donated over $50,000 to various groups in the community.

Members of the club cite South Canyon, Story Mill and Sypes Canyon as some of their favorite runs. “I’m partial to Sypes because it’s out my back door,” says Summerfield. “You get up high very quickly—and it’s a blast coming down.” Another local favorite is the Tour de Wolves, which winds past a bed and breakfast that also serves as a wolf sanctuary. Says Verwys, “If you’re lucky, you can catch a glimpse or hear a howl from the wolves.”

As the BSWD enters its 41st year in existence, it seems to have stayed with its identity as a club for runners of any ability. When asked if the club is as popular now as it was in its first few years, Summerfield explained that as Bozeman has grown, so too has the number of running clubs.

“A recent graduate from Montana State University started his own running store in town (Bozeman Running Company) and has started his own running club, and then a shoe store in town did the same—so Bozeman now has three running clubs. We’re such a mecca for running (as well as skiing and ice climbing) that Bozeman supports all three very easily. We’re more the family club, with little kids down to walking seniors like myself.”

Still, the best part of the BSWD, says Verwys, is the camaraderie of the club. “Just when you think you’re not going to be able to run another step, you get a high five or a smile or an encouraging word from a fellow racer or volunteer. It lifts your spirits and carries you forward.”

Want to find a trail-running club near you? Check out our Trail Club Finder here.

What is a Land Trust?