How to pretend you’re all business—from the trail 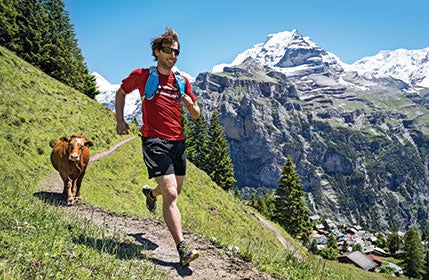 Your boss may never believe this one: “Yeah, I am late for the conference call because a cow was chasing me.” Photo courtesy of Patitucciphoto.

“Is that a cow bell?” Blake asked from an office in D.C. “I thought I heard one.”

Standing on the side of a 30-degree pasture, high above the Swiss village of Champéry on the border with France, I had just been busted on a business conference call.

I spotted the offender, 10 yards away. How had I missed her? Who knew 1,500 pounds of dairy cow could be so sneaky? I racked my brain for possible alternative explanations and came up empty. Besides, cover-ups never work. (See: Nixon, tobacco industry, Milli Vanilli.)

“I’m a bit late getting to the office,” I told everyone on the call at NPR’s D.C. headquarters.T

Then a pause. Then Blake deftly summarized the sentiment from his end.

Maybe you’ve been there. You’re out for a run. All is right with the world. Your legs feel strong. The weather is great. Even your dog seems happier than usual. So you add on a few extra miles. After all, that work call isn’t until 9:30, right?

And then you fail. The minutes tick away faster than expected. So you grab your cell phone out of your pack and dial in. In the interest of allowing us each to get in that extra half hour, here are my tips for faking your way through a professional phone call from the trail.

1. Layer up. You might get chilly. Hypothermia bestows loss of cognitive skills, slurred speech and poor decision making, all noticeable in the workplace.

2. Watch the wind noise. Ever see a radio or TV reporter in action? Their microphones sport enormous windscreens. Even the smallest breeze can sound like a roar on the other end of a phone. Find the lee side of … anything. Pro tip: In a pinch, your pooch will do.

3. Nix the status update. Staring at a double rainbow—as a bald eagle flies by? If it’s 9:10 a.m., you’re the only person who should see it. No social media posts. Make sure any zealous posters you’re running with know, too, because being tagged in a photo is the modern-day equivalent of having a “Late to Work” sign duct-taped to your ass.

4.  Get off the trail. There’s an apocryphal but cautionary tale of an obnoxious cell-phone user on a popular summit. A wide-eyed hiker asks the yakking caller, “Wow! Is that the new iPhone?” The caller nods proudly, and when the call’s over, hands it to the envious party, who promptly and rightfully chucks it into a ravine.

5. Watch the ambient noise. Are you near something or someone that might betray your location? Actual questions I’ve been asked: “Did you just finish a trail race?” (Yes.) “Are you somewhere where you’re about to fall off a mountain?” (Yes.) “Are you with Kilian Jornet?” (No.)

I’m getting better at following my own advice, but unanticipated events can unravel the best-laid plans. Last fall I was, once again, calling in late—this time from New Hampshire’s White Mountains—when I heard thunderous crashing in the woods.

Know when to fake but also when to fold.

Doug Mayer is a contributing editor for Trail Runner, owner of Run the Alps tours and a producer for the NPR show “Car Talk.” He lives and works from almost anywhere. This article originally appeared in our October 2015 issue.