Trail-running newbie? No one needs to know. Here are 10 easy ways to up your trail cred 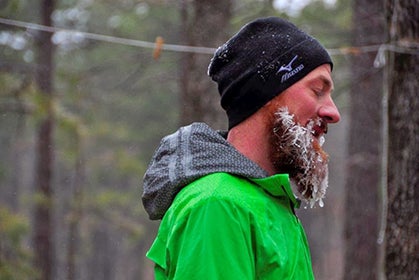 A frozen beard is a great way to show everyone you mean business on the trails. Photo courtesy of Mike Langille.

New to trail running? Welcome! For many of us, the sport has been nothing short of life-changing.

But, getting started can be tough. Especially when you find yourself at a trailhead with a posse of runners who talk about ultras in the same bored tones the rest of us use to discuss our shopping lists. They’re wearing trucker caps. They’re drinking coffee that could kill a small child. Their VO2 max means that, for much of the day, breathing is entirely optional. It can be pretty intimidating.

And then … you start to run. And you realize you’re in waaay over your head.

Well, good news: help is on the way. Here are 10 tips (and a bonus) that’ll allow you to keep up with those seasoned dirtbag runners, on the trail and off. 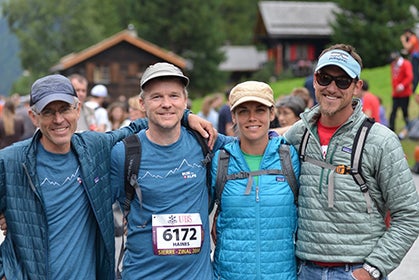 No matter how much it hurts after a trail race, smile! (The endorphins will help.) Photo courtesy of Cédric Pignat.

Find yourself running with a serious athlete who weighs less than your dog? Just when you think your soul is crushed and you’re about to start whimpering out loud, remember: there are inside words, and there are outside words. Say whatever you need to say to get yourself through the run—but say it on the inside.

Pro tip: If your inside words fail you, you can fall back to good old American consumerism. Promise yourself that new iPhone if you survive the run.

2. Need to take a break? Blame an injury. 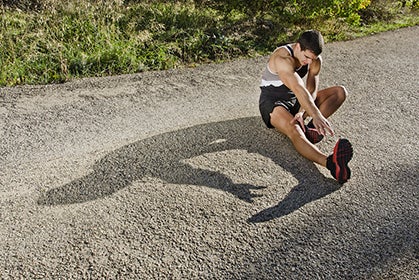 Sometimes inside words just aren’t enough, and you can’t keep pace with the cardiovascular machine in front of you that’s masquerading as a friend. It happens.

Need to take a break? Mutter phrases like, “Old injury … surgery … orthotics … lots of physical therapy.” Then stop and stare intently at any location on one of your legs.  Rub it, look vaguely worried. That should buy you some quick empathy, and a little downtime to get enough oxygen back on board to stave off permanent brain damage.

Pro tip: Everyone’s had a hamstring injury. Ditto with the IT band and plantar fasciitis. Those are boring. But how many people can say their metatarsalgia is acting up again? The more obscure, the better. 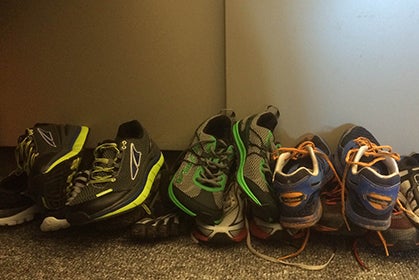 It’s one thing to have a dozen pairs of old trail runners in your entranceway. But being able to explain each pair’s history, and why you still have it on hand, is the mark of a seasoned pro. Example: “These S-Lab 3 XT Wings are just unstoppable on technical, muddy terrain after a morning frost following a full moon.”

Pro tip: Odor will be an issue. If you need to decide between offending visitors and impressing your running comrades, you’re still a newbie. 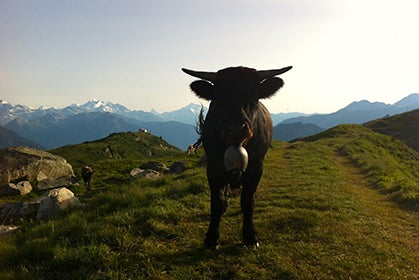 If there’s an animal in your way that could gore you, you’ll never be blamed for detouring a few yards … casually. Photo courtesy of Doug Mayer.

Approximately 15 years ago, a trail-running pal and I were cruising through the woods near my house, when I spotted a flash not twenty yards ahead. I screamed, “Deer!” and moronically ducked for cover. It wasn’t the white tail of a deer. It was water coming from an old spring pipe. 20,000 trail miles later, I’m still hearing about it. Moral: play it cool around wildlife.

Pro tip: Two years ago, I was trying to beat nightfall as I raced back to the trailhead. In the twilight, I ran within inches of a moose’s ass. No one cared. You need to be with someone for a story to have trail cred.

5. Casually sprinkle the first names of elite runners and acronyms of races throughout your conversation.

What speaks to your knowledge of a sport more than knowing the lives of the elites in intimate detail? Example: “Frosty and Ellie have really had such great comebacks. I wonder if we’ll see them at HRH, UTMB or WS100?”

Pro tip: Be forewarned: you might meet your match. I have friends who can quote the race schedules of sponsored trail runners. Without irony, they will say things like, “I’ll take Joe over Sage at Sierre-Zinal and give you two minutes thirty.”

6. Beg, borrow or steal an old race shirt, then act like it’s the only clean shirt you could find. 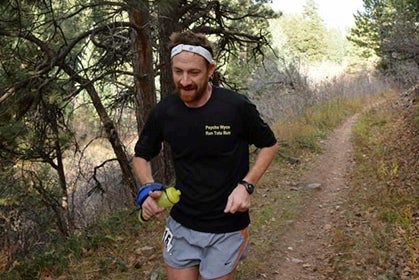 Do all your runs in race shirts, even if you’ve never run a race. Photo courtesy of Jeremy Duncan.

Wearing threadbare swag from some obscure trail race can seriously boost your cred. This tip is a gamble, though, because if your running partner decides to Google the race results and discovers you’ve never been within 2,000 miles of Les Kilomètres Verticaux de Chandolin, you’ve got a lot of ‘splaining to do.

Pro tip: Wear the shirt inside out, suggesting you don’t care to show off.

Sooner or later, it’s going to happen. That Americano will kick in, and you’ll need to head off trail for a C.I.D. (Sorry, this is a family web site. Look it up, or maybe don’t.) When the time comes, your tone of voice should reflect pure boredom. Use language like, “Hey, gonna duck in the woods. Catch you in a few.” Hold the package for home delivery if you can’t be blasé about it, but that’s an inside discussion only.

Pro tip: Anything will work as TP if you’re desperate enough. Leaves. Twigs. Rocks. Snow. Try not to pick a leaf with a slug on it. And when large bits of forest litter wash out in your post-run shower, try not to pass out.

8. When the gun goes off at a trail race, act unconcerned. 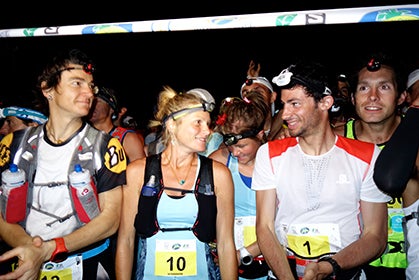 Kilian Jornet (right) is a good example of someone who never looks like he’s trying too hard … and whose trail cred has never, ever been in doubt. Photo courtesy of Bryon Powell/iRunFar.com

We understand the enormous pent-up excitement of your first trail race. The goal here, though, is to act like you’ve lost count what number race this is for you. Want to really go all out? Decline the race shirt, with a polite but dismissive comment like, “Thanks … but I have sooo many!”

Pro Tip: Look at the photo of Kilian Jornet, above, at the starting line of Skyrunning’s Transvulcania race last year. Looks like he might miss the starting gun, doesn’t it? This is your goal. If necessary, practice in a mirror.

9.  When passing others, converse normally. 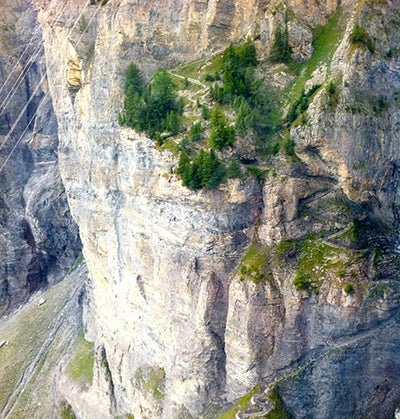 Some hills you may not be able to fake it on. Like Gemmipass in Switzerland. Photo courtesy of Doug Mayer.

There’s no faking your blood’s oxygen saturation levels. But only you need to know that you’re a heartbeat away from clinical death. Everyone else can think you have three lungs. Even if you’re over 12,000 feet and running up a 10-percent grade, get out a greeting that sounds like you’re lying on a beach. “Oh, hey! How’s it going? Nice day, eh? Have a great time!” Then get around the next corner, and gasp all you want.

Pro tip: Pre-oxygenate by breathing quickly before your encounter, so you don’t pass out.  And whatever you do, keep running, so you don’t get dragged into a discussion and have to start panting uncontrollably and pointing desperately at your heaving lungs.

10. When someone asks you about the race course, feign ignorance. 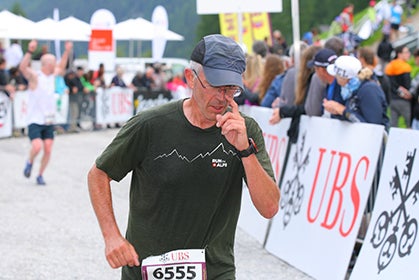 The author not following his own “pro tip” about knowing the locations of race photographers. Photo courtesy of Cédric Pignat.

Nothing says “seasoned hand” like not particularly caring about the race you’re about to start. When someone asks where the first aid station is, respond with a, “Gee, I’m not really sure. I assume they’re some along the way.” Apologize for not being more helpful, and confess that you haven’t really looked over the course profile too intently.

Pro tip: In fact, you should know every detail—including where the race photographers will be, so you don’t appear to be on the Bataan Death March in the overpriced race photo you won’t be able to resist buying. And when you cross the finish line, muster up an “over already?” look. 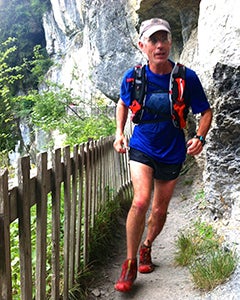 The author trying not to look over the edge of a cliff. Photo courtesy of Doug Mayer.

Actually, forget everything I just said. Want to stop acting like a newbie? Just… run.

Unfortunately, trail running, like so many other things in life, can be like high school, complete with cliques, cool kids and no shortage of false modesty and fishing for compliments.

Be yourself. Find out what works for you. Grab a coach, a dog, a friend, or just run solo. But run.

The rest will take care of itself.

Doug Mayer is the founder of Run the Alps. He has a dozen pair of old running shoes in his hallway, and has casually pooped innumerable times in the woods. He lives in Randolph, New Hampshire.