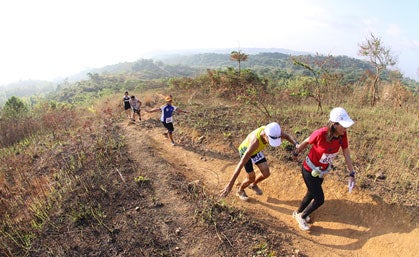 Are pacers an unfair advantage? Photo by Big Stock Photo.

Editor’s Note: The original version of this piece appeared at Run More, Talk Less and is our top pick among entries into the June Trail Runner Blog Symposium: “What constitutes an “unfair advantage” in a trail race, and what—if anything—should be done to even the playing field?”

In commenting on a recent pre-Western States 100 interview on iRunFar with Dave Mackey, Nick Clark and Ian Sharman, I mentioned how I’d love Clarkie and Mackey to go for broke and make it happen. Why? Because they are guys with real jobs and families (spouses and kids).

I was counter-commented with, “Running coaching is a real job too, just not with a steady paycheck.” Yes, it is. I should know, I have that one … as well as a real job, i.e. one that requires a certain number of hours every week at an office. In this country, that means at least 40 hours a week, plus a commute, which can easily take 10 hours, typically daylight hours, out of your potential running time each day.

What is the advantage of either not working (or having a significant other or parent to support you financially) or working from home? You can get however many hours of sleep you need and get out the door for a run whenever you feel fit—and for however many hours/miles your training calls for. For the rest of the world, it is either 4-5 a.m. wake-up calls and stumbling in the dark, late-night runs after dinner settles, or a quickie at lunch hour.

But is it an unfair advantage?

Absolutely not. It is each of our individual choices what to do in life—whether to work full-time regular hours, or live off scraps that maybe a sponsor provides while you’re in peak, or a spousal salary, or a loan you hope to repay in the future. We might opt to run a business that allows us fewer and more flexible working hours, but it might also entail insanely more hours, like Devon and Nathan Yanko’s new bakery.

Then we must take into account families, and, in particular, families with kids—those snot-and-tears munchkins who demand more of our presence, by far!

I should know, too, as I began my running journey when my kids were aged five and 10. I had no sleepless nights by then, and though I was bound to their school activities and sport practices, I was still able to get runs around baseball and soccer fields while still watching them and being “present.” But even then, quality was often missed, as well as trails. Long runs began at 4 a.m. on Saturdays and Sundays, to ensure being home by late morning.

Is it unfair, then, to be single or married without kids? Absolutely not. Again, these are choices we make.

Are pacers in the later stages of an ultra an advantage? Ask Karl Meltzer. The king of 100-mile races prefers to run alone and advocates for it. Beyond simple safety, consider that a runner with a pacer has an extra pair of eyes to navigate the course. Some set the pace (literally), some remind to drink/eat, some even lend their flashlights, as happened to a runner at the San Diego 100-Miler. Would that runner have finished in the same time/place otherwise?

Sometimes, though, a pacer can be disadvantage. It is an extra worry: “Is my pacer having fun?” What if a pacer led you off course? What if your pacer is not fit for that amount of miles/time/terrain, and you feel guilty leaving them behind? Whatever it is, advantage or not, if it’s allowed, it is fair. Let’s live with it.

Same goes for crew. While I prefer to run by myself, and have become efficient utilizing aid stations and my drop bags, a crew is totally beneficial. It is an advantage, but is legal, so indeed a fair one.

What else could be construed as an advantage?

So, after all, what is unfair? Anything that is forbidden by race management!

Frankly I am not sure if much can be done besides what is being done. Nor do I want to think about it. I pride myself on being “old school,” and just wish quietly we stay old school forever.