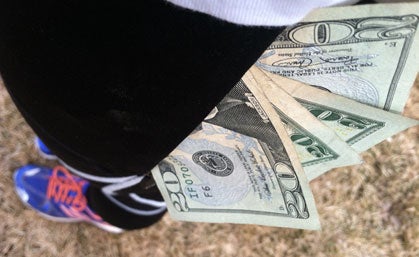 Editor’s Note: This piece originally appeared at Uphill Running, and was our top pick among entries into the March Trail Runner Blog Symposium: Is the introduction of bigger prize purses at trail races a positive or negative thing overall? To browse other entries, check out our March Symposium Highlights.

Trail races are new in the business world. It’s more evident in the type of runner than in the prize purse. Road racing can seem overwhelming cut-throat. From the moment you step out of your vehicle you better have your game-face primed and ready. You’re being judged by your outfit, by your shoes, and by the definition of your quads. It’s silly, but it’s true. This isn’t to say that trail runners don’t judge, but the start-line of a trail race is usually accompanied by a dull conversation about beer, mustaches, and the last time you rolled…an ankle.

Racing isn’t for the soul-searcher. Trail races satisfy the need for trail runners to test their ego. Bigger prize purses in trail racing will bring better competition, race support, and will hopefully bring shorter races some deserved cash-flow. In these regards, bigger prize purses have the ability to positively impact the sport of trail racing.

Money’s greatest strength, is money’s greatest weakness. For every racer there are infinitely more runners. The word “race” is pejorative among the pure. Racing and purity is too strange of a juxtaposition for the free minded souls that ramble consciously along the trails for pleasure. If the popularity of an event increases, the individuals searching for a secluded escape from the popular are displaced. For the pure runner bigger prize purses can look akin to the Indian Removal Act of 1830.

It’s important for trail racers and trail runners to take into account both positive and negative. It’s important to acknowledge that popularity and population can be detrimental to the medium: The mountains, the forest. The escape, the fulfillment. To be positive and successful bigger prize purses need to raise the awareness of environmental preservation and sport. It’ll be important for trail racers and trail runners to work together to improve and compromise. The bigger the prize purse the more good the race director, sponsors, and athletes should be required to do for the use of the land, the sport, and the preservation of the wild.