A runner takes inspiration from another fanatic or two 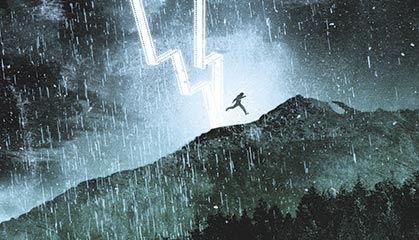 Outside of my window, cold rain fell at a biblical rate. The news channels were already reporting several inches of much-needed rainfall.

I decided that a nine-block run down to the video store and back would suffice for my day’s mileage, figuring that if I wasn’t going to run in the slop, at least I’d watch a movie about somebody else running. When I arrived at Le Video with no specific movie in mind, I asked the clerk if he knew of any great running films.

“A movie specifically about running?” he asked. “Or perhaps one that embraces the same philosophy?” His wild eyes, hollow cheeks and lean frame suggested either knowledge on the topic of running or the latest trend for obsessive shut-in movie critics. Both seemed accurate.

I don’t appreciate being sworn at, especially in a different language. “Excuse me?” I said.

Happy not to go back out into the downpour, I stood and listened as the video clerk rattled off the plot of the 1982 film.

“It’s the story of Brian Sweeney Fitzgerald, a prospective rubber baron in the Amazonian Jungle during the rubber boom over a century ago. He found a plot of rubber trees cut off from the Amazonian river traffic by powerful rapids.”

“Fitzcarraldo decided to haul a 300-ton steamship up and over a ridge to put in upstream of the rapids. He devised a series of winches, cables and pulleys, and he got the help of hundreds of Amazonian Indians to move the ship over the mountain.”

He stopped and waited.

“What does that have to do with the runner’s spirit?” I asked.

“Don’t you see? It’s the perfect metaphor for running! He could have faked the scene. He could have used a model ship or trick photography and nobody would have cared. Why run? It’s not like you’re accountable to anybody. There are other, much simpler ways to stay slim.”

I looked out at the falling rain beyond the window knowing that the wild-eyed clerk had a point. That was the problem. I left the movie on the counter, walked out into the rain, returned home, threw on just enough clothes to keep me warm in the downpour and headed out the door.

I ran up and down the flanks of Mount Tamalpais—the tallest and most esteemed of San Francisco’s neighbors. The streambeds that had been all but dry two days earlier gushed over the rim and onto the trail. The moss on the trees and the mushrooms beneath the foliage quaffed the fresh, rushing water. For the first time in months the forest seemed to be breathing again.

Before I’d left, the video clerk had told me that Werner Herzog had dubbed himself, after the steamship exploit, a “Conquistador of the Useless.” Going for a long run in the mountains was also a nonsensical act of defiance against nature.

In this strange endeavor of moving across land at a pace faster than a walk, what measurement should we use to gauge progress or success? Time? Distance? Pounds shed?

Or is it much simpler than that? Are we all just “Conquistadors of the Useless,” slowly moving our ships over mountains?

Rickey believes the best conquest is that of the useless.