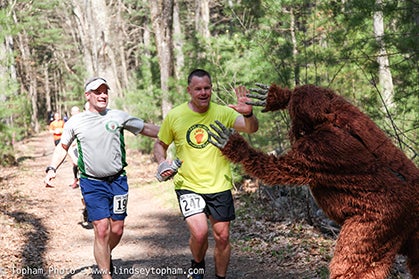 “Leave no animal behind,” is the motto of Boston’s original and largest trail-running club, the aptly named Trail Animals Running Club (TARC).

And their mascot? A Yeti that often appears in TARC-hosted races.

Says long-time member and current head, Bob Crowley, “The Yeti is a neutral, fun-loving creature that represents all animals. The honor of becoming the Yeti is passed along by various members who want to act as a prankster during our races, looking for runners to surprise and cheer on.”

Even the race courses were once marked by the Yeti–first covering his feet in flour, then walking the course and leaving large Yeti paw prints leading the way down the trail.

Of the club’s 3,000 members, 70 percent hail from New England, 25 percent from other states and 5 percent international. While the club was founded in 1995–“but,” says Crowley, “no one wants to claim the title of founder”–it wasn’t until 2006 that the running club began to really grow in size. 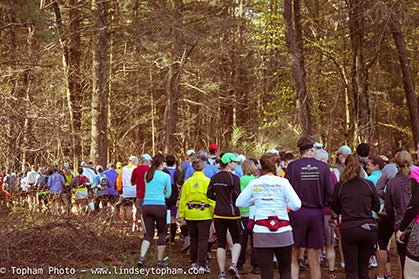 Runners line up at the TARC Fall Classic, ready to run a 10K, half-marathon, marathon or 50K. Photo by Lindsey Topham.

“The club went to moth balls during for about 10 years because the leadership members, myself included, shifted priorities away from running and toward family and careers,” explains Crowley.

Then in the mid-2000s, three ultrarunners–Bob Crowley, Chris Haley and Chris Shanley–decided to revive the club. Since their kids had grown older, they’d resumed ultrarunning and were looking for company on the long training runs in preparation for the Western States 100 Endurance Run in the Sierra Mountains of Northern California.

“My son and I built a hacked-up website [for the club] in the 90s,” Crowley says. Now the Internet is the group’s best way of recruiting new members while also keeping current ones updated on the club’s happenings.

A quick scan of the club’s Facebook page suggests that members are active, even beyond the three weekly runs–a Saturday run in Middlesex Fells and two Sunday runs in Blue Hills–one for new members and the other for veterans. The former Sunday run is geared toward runners looking for a moderate run with great socializing. The latter run often involves running 20-plus miles through the undulating forests of the Blue Hills.

No runner is left behind.

Club membership is free and there are no presidents, secretaries or any other assigned positions. And, as the website explains, “trail humor is priceless.”

Says Reji James, 45, of Boston, “As runners, we are better off spending time running than doing administrative tasks.” 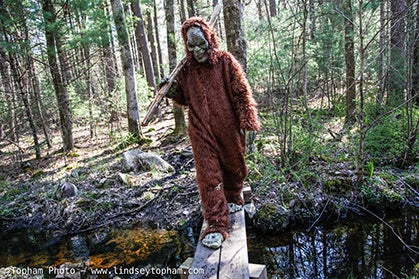 The Yeti, ready to encourage (or terrorize) runners. Photo by Lindsey Topham.

“Members, volunteers, everyone is expected to bring a folding chair to races to just hang out and share,” explains David Diriwachter, 44, of Martha’s Vineyard. In spite of the size, members still feel the club is intimate.

“I was fortunate enough to get out on some runs with some of the original TARC members,” says five-year-member Josh Katzman, 34, of Arlington, Virginia. “I was just getting into ultras, and these guys talked about them (100-mile races in particular) in such a nonchalant and humble way. The humility and acceptance of folks from all walks of life set a good example of what I wanted from my running ‘career’.”

A short time later, Katzman and Crowley began talking about hosting an organized race. One race quickly turned into two, and soon enough they had created the TARC Trail Series.

In the past few years, the club has hosted twelve races, from 10Ks to 100-plus miles. Most races sell out quickly, and total anywhere from 50 to upwards of 400 people. While the club encourages all of its members to participate in the runs, they’re cautious of ensuring that members first feel a connection to the club and the trails themselves.

Similar to the sport of trail running in a larger sense, the epitome of TARC is a welcoming community of people who love trail running. However, another, often under looked, aspect of trail running is the love for trails themselves–and the responsibility for ensuring they remain that way.

Jesse Veinotte, 33, of Princeton, Massachusetts, joined after witnessing the club’s philosophy regarding the environment.

“Their attitude towards conservation of the local trails for recreational purposes appealed to me,” he explains. “Making all of their races accessible to many people by setting race costs at a reasonable rate was also a big plus for me.”

The popular Ghost Train Rail Trail Races, hosted by TARC, costs participants $50 for the 30 to 100-mile options and $20 for the 15-mile race. In 2013, nearly 300 participants faced the October night and ran the 15-mile trail out-and-backs following the old railroad tracks of Milford, New Hampshire. This year’s race is set for October 26, 2014.

However, the highlight of the year is the TARC 100. The race, held for the first time in 2013, is Massachusetts’ only 100-mile trail race, a flat and fast, 25-mile loop course that, Katzman, the current co-race director, stresses, has very little repeated trail.

“That’s really difficult to do so close to the city,” he adds.

“For all of the work we put in, it never felt like work. It was a true labor of love, so seeing it all come together was very rewarding,” says Katzman. “Someone described the vibe as a cross between a race and some sort of funky family reunion.”

“This is my community which is unlike a lot of the world today; it’s kinda like seeing a family or friend move out of your area, but meeting up years later and not losing a heartbeat. I pick up where I left off at every run I attend.”

Planning a visit to Boston? Here are a few local spots that the Trail Animals recommend:

Want to find a trail-running club near you? Check out our Trail Club Finder here.