A book by Scott Jurek, with Steve Friedman 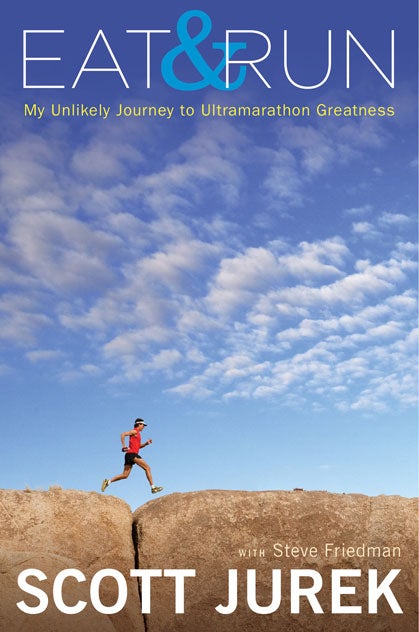 While most trail runners have heard of Scott Jurek and may know he won the vaunted Western States 100 seven consecutive times, setting a course record in 2004 (it was broken in 2010), and is an unofficial spokesperson for the vegan endurance athlete, his recently released book, Eat & Run: My Unlikely Journey to Ultramarathon Greatness (available in June), is a shockingly honest, revealing and inspiring memoir.

Foreshadowing much of what is developed throughout the book, in the first chapter, Jurek describes bonking in the sweltering heat at the midway point of Death Valley’s grueling 135-mile Badwater ultramarathon in 2005. But rather than a blow-by-blow treatment, Jurek’s is rich with introspection, tying all of his life events and endurance feats back to a difficult, self-conscious childhood, a mother suffering from early onset MS, a strict, often surly father and his explorations with food, in which he evolved from being a McDonald’s-chowing machine to a thoughtful plant-based eater.

Even at the pinnacle in his ultrarunning career, Jurek questions whether he was “the Real Deal” or a fraud, whether he should have listened to the experts who said “athletes needed to fill their bodies with animal protein,” trained less, could “quit without being a quitter” … then, the familiar chiding voice of his long-time friend and pacer Dusty Olson squelches the self doubt.

Jurek’s “Unlikely Journey” began growing up on a dead-end road on the edge of the woods outside winter-frigid Duluth, Minnesota. Particularly as his mother’s MS progressed, many of the household chores, including cooking, fell on a young Jurek. Money was tight. His father, who worked two jobs, was a tough task master and disciplinarian—one day, not happy with Jurek’s firewood-stacking job, he knocked down the big pile, forcing Jurek to start over. A complaint was met by: “Sometimes you just do things!” It is a mantra Jurek repeats many times throughout the book.

Tracing his food passion to her, Jurek was close to his mother, who, before her sickness, tended a family garden and taught Jurek to cook, even when he could barely stir a bowl. But his was not a fun childhood, and he would often escape to wander the nearby woods.  As a high-school sophomore, working as a short-order cook, taking care of his mom, Jurek found the focus he needed, by joining the cross-country ski team, the genesis of his running. He writes, though, that, “I ran because I wanted to ski.” He thrived and did well at the sport, winning races and becoming acquainted with such terms as “VO2max.”

It is also when he met a talented, flamboyant bad-boy skier named Dusty Olson, who writes Jurek, “was going to change my life.” From the beginning, theirs was a tumultuous relationship, with the womanizing, drinking Olson often berating the straight-laced, reserved Jurek. Then, with Jurek in college (his father had kicked him out of the house about then), the odd couple ran, biked and skied together. And it was Olson who convinced Jurek to run his first ultra, the 1994 Minnesota Voyageur 50 Mile, in which Jurek took second over the more accomplished Olson in third. He had found his path.

And while a new friend, local running legend “Hippie Dan” had introduced him to earth-friendly philosophies (and drinking wheatgrass), Jurek was pounding McChicken sandwiches and grilling “whatever animal flesh I could find.” Ironically, it was at McDonald’s that Jurek met his would-be wife, Leah, who was mostly vegetarian at the time and would pave the path to his vegetarian and eventual vegan lifestyle.

From there, it’s a whirlwind ride through Jurek’s life. His forthright honesty makes the book a page-turner. Throughout Eat & Run, Jurek questions, always questions, everything from his diet to training to motivations to relationships. And he is always reading, from philosophical to nutritional tomes, and sharing the insights he gains (or loses) in his own life.

At the end of each chapter, Jurek shares a vegan recipe and sometimes training or technique tips, but I was so engaged with his story that I blew past these until I had finished the book.

Check out the soon-to-be-on-newstands June issue of Trail Runner (on sale May 3) to read an excerpt from the forthcoming book. Need a subscription? Sign up here!