Is running nude in your future?

Think back to those blessed, golden, childhood days when streaking … 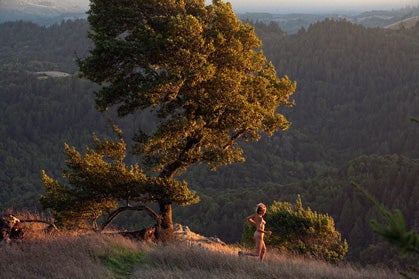 Think back to those blessed, golden, childhood days when streaking around the front yard half clothed (probably through a sprinkler) was pure bliss. Now, with societal norms and pesky laws forbidding nudity, adults aren’t afforded that same freedom to bare it all. That is, until you sign up for a bare-buns race, which may change how you view running and public nudity.

Running nude takes balls. It is edgy, it is different, it is appealing to push your comfort-zone limits. For those who are comfortable in the most natural state, simply removing textile restraint means freedom. “Our runs are about feeling the sun on your skin, about feeling how wholesome and good for the soul it is,” says Judy Williams, race director for the Wreck Beach Bare Buns Run in Vancouver, British Columbia, who prefers to be called a naturist. “There is no judgment, just appreciation for being the way nature intended.” 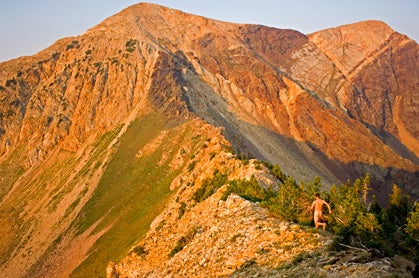 Why Strip Down?
For those (most of us) who aren’t accustomed to recreating outdoors au naturel, the thought of running unclothed might sound painful or embarrassing. “Many bare-buns participants have never been naked in front of 100 people, so stripping down and racing takes a lot of guts,” says Ron Horn, director of the Bouncing Buns 7K Clothing Optional Trail Run in Sunny Rest Resort just north of Allentown, Pennsylvania. His race drew upwards of 100 runners in only its second year.

With nude events spanning the United States, the only excuses for not partaking are the ones in your head. Sue and Gary Butts (no joke!), directors of the North Carolina-based B.A.R.E (Butts-A’Runnin Race Enterprises) series, which boasts eight clothing-optional events from South Carolina to Vermont, have seen participation in their eight events double since 1999.

Says Gary Butts, “We hear many people come back and tell us they weren’t embarrassed, because it was such a relaxed atmosphere and no one cares who’s got what.”
The Butts boast a competitive series, and at the finish line you can expect visible time clocks and age-group awards. They have hosted world-class athletes such as Dave Dunham, 47, of Haverhill, Massachusetts, 2000 USATF Mountain Runner of the Year, who says, “I’ve only done a handful of nude races, but there is something edgy about running nude when you’ve been clothed your whole life.”

Although Dunham ran his first nude race (one of the Butts’ down in South Carolina) to accrue points in a point-based competition put on by a local running magazine, the Hockomock Swamp Rat (the competition ran every three years between 2001 and 2009 and spanned the entire year), he’s not shy about admitting he enjoyed it. Dunham remains a competitive runner on the masters circuit and is currently attempting to summit the highest peak in every state. So far, he’s been to the top of 40 states and done 10 of them in his birthday suit.

“Running nude is very freeing,” says Dunham. “I enjoy being out there and breaking the rules.”

The Naked Truth
Nude runners take on all shapes. Racers range from 60-year-olds with extra padding to competitive athletes who shave everything. “Typically, a runner who chooses to remain clothed is more uncomfortable in a group when everyone else is nude,” says Horn. “Suddenly he is the minority and being nude isn’t such an awkward thing.”

“Ninety-five percent of our racers run nude,” says Williams. Wreck Beach, a hidden gem only 15 minutes outside Vancouver, is the first regional park in Canada to hold a clothing-optional event. Money from the event goes to preserving the park. “We want runners to be in harmony with nature,” says Williams. “Body acceptance is the idea and nude recreation is the way.”

However, race directors do take precautions to protect the anonymity of racers. “It is awkward for some people to go into work on Monday morning and have everyone know about the nude race you ran,” says Williams. Horn only records the first name and last initials of runners in race results, while the Butts don’t publish results at all. Runners are asked to refrain from using cameras and to respect the privacy of others. “Racers understand once they abuse the privilege of running a nude race, such as posting pictures of anyone else, the event might be cancelled for good,” says Horn.

Since Wreck Beach is on public lands and accessible to media, Williams offers runners the option of wearing a red wristband, which signifies they don’t want their photo taken, and the media is asked to respect them. Voyeuristic photographers (clothed non-runners who show up to snap shots pre-race) are asked not so nicely to scram, or strip themselves.

Balls to the Wall
Where do I put my number? What about chafing? Is it going to hurt? Race directors have heard it all.

As for the race number, it probably won’t be the only thing flapping around. “I’ve pinned it on a hat or put it on a string and tied it around my waist,” says Dunham. Other events use Sharpies to write numbers on arms or legs.

As a practical matter, the latest trend among well-endowed women is to wrap “the girls” in saran wrap to minimize bouncing. Shoes are usually encouraged, along with hats, sunscreen and sunglasses.

“I’ve seen people wear tops and no bottoms, start the race fully clothed and finish naked, register with clothes and then run naked,” says Horn. “We say anything from a snow suit to a birthday suit is acceptable. Run in whatever you feel comfortable wearing.”

Whether the appeal is simply a tick off the old bucket list or the draw of competition in a novel setting, nude racing provides an opportunity to experience nature at its most basic. If nothing else, it makes the age-old dilemma of what to wear on race day a lot less stressful.

Jen Burn is the Subscriptions Manager at Trail Runner.

Bouncing Buns 7K Trail Run
Sunny Rest Resort // Palmerton, PA // June 2012
A well-marked, wooded trail race with age-group prizes, a cash bar and access to all the amenities of the resort with your entry. www.pretzelcitysports.com/bouncingbuns

Coventry’s 5K XC Run
Coventry Club & Resort // Milton, VT // June 2012
Open to all ages (under 18 must have signed consent by a legal guardian), the race is entirely off road, and access to resort amenities is included with entry. www.coventryresort.com/aboutus.htm