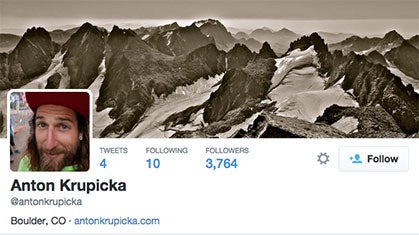 One day last week, I began my routine browsing of Twitter, when a familiar, bearded face on the periphery of my screen caught my attention. Next to the face was the name Anton Krupicka. Under that, @antonkrupicka. Could it be true that the Boulder, Colorado-based runner, known for his pursuit of simplicity in the mountains, had actually created an account on the social media site? A spooky Twitter handle of the past warranted my distrust.

By 2011, Anton Krupicka was becoming a household name in the trail-running world. He had won the Leadville Trail 100 in 2006 and 2007 and the White River 50 in Washington State in 2009 and 2010, and had finished second at the Western States and Rocky Raccoon 100-milers in 2010 and 2011, respectively. Joel Wolpert’s short film “The Runner In Winter” showed up on the internet around this time, with footage of Krupicka training in snow. New Balance had just released a three-plus-minute video ad for its Minimus line that showed Krupicka sawing excess outsole off a running shoe with a kitchen knife. People couldn’t get enough of this extraordinary wild man, with his bearded face and minimally clad feet (and chest).

Krupicka regularly updated his blog, “Riding the Wind,” and wrote guest posts on various websites. But, strangely, he declined to join other celebrity athletes who were creating Twitter accounts to connect with fans.

It wasn’t long before the Twitterverse took matters into its own hands, though. In December of 2011, the handle @ANtOns_GhOSt showed up on trail runners’ screens with the description, “The Wild And Wooly Life and Loves of Ultrarunning’s Number One Bro ANTON TONY KRUPICKA plus his training regimen sometimes.”

Though the account was not Krupicka’s creation—the parties behind @ANtOns_GhOSt remain unknown—the description seems innocent enough, with no pretense of being the athlete’s authorized handle. But things got a little creepy. The tweets appeared to be Krupicka writing directly to his followers: first-person pronouns, few quotation marks. Many on Twitter seemed to take the unauthorized account to be the man himself. Mentioning @ANtOns_GhOSt in tweets, they received responses that appeared to have been typed directly by Krupicka’s fingers.

It took only two months for Krupicka to speak out on the unapproved account. “One thing I will whine about: posing as someone else on the Internet is pretty lame, bordering on douchie. Equal parts flattering and annoying, I suppose,” he wrote in a January 23, 2012 blog post. “For the record, ‘Anton’s Ghost’ on Twitter is not me in case there was any confusion about that (and there actually seems to be).”

But the confusion continued. Well-known authorities in the trail-running community, including Krupicka’s own sponsor, New Balance, used @ANtOns_GhOSt as if it were an authentic link to the athlete.

At the same time, its tweets indicate that @ANtOns_GhOSt was receiving backlash for what might be seen as its deceptive nature. “General housekeeping FYI: all tweets til now have been direct quotes from AKs blog & interviews, NB RTs or general running commentary,” the ghost tweeted two days after Krupicka’s blog post. “[T]his was started to bring AKs life and style into twitter where it is sorely lacking. This remains the case we continue for now,” they continued in the following tweet. A few months later, they defended their work again, tweeting, “FYI this is not ‘fake.’ We RT anton training, news & quotes in lieu of a publicist & with respect 4 his aversion 2 self promotion #thatisall.”

After gaining 5,294 followers and posting 88 tweets, the account’s activity stopped in December of 2013, almost two years after it had started. However, its confusing identity remained. Trail Runner even used it last July to tag an online interview with the runner. As recently as last month, Kilian Jornet, known to be a friend of Krupicka, tagged a video of him with the inauthentic handle. And on February 5, promoting the same video, New Balance Running again included @ANtOns_GhOSt in a tweet.

Also on February 5, @antonkrupicka came online and sent its first tweet. It seemed legitimate, but that was also the case with his “ghost” initially. So I contacted Krupicka, who confirmed the new account was his authentic creation.

After so long, what caused the iconic trail runner to join Twitter? Though he’s not really into tweeting, he says, he wished to lock up his name as his official handle and eliminate the confusion surrounding the unauthorized account. That reason, in fact, was the basis of @antonkrupicka’s first tweet: “I prob won’t start regularly tweeting, but I want to make it clear that @antons_ghost is NOT me and I don’t authorize it.”