Aid station foods are as varied as the trail races they’re served at, and offer an adventure all their own 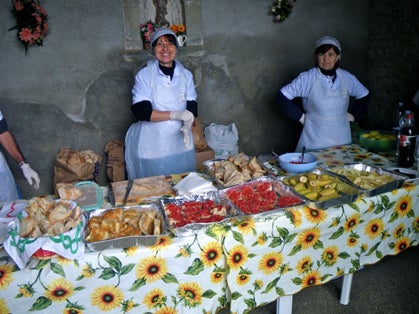 Bruschetta and baguettes are among the foods you can find at Italian aid stations. Photo courtesy of Sarah Lavender Smith

Hands on knees, I grunted my way to the 11,000-foot-high summit of Lone Peak and the mile 20 aid station of The Rut 50K in Big Sky, Montana. Men’s winner Kilian Jornet, we were told, had finished the race about half an hour earlier, but I was too transfixed on the aid station food to care. A sea-level dweller, the scree-laden climb had left my tank completely empty.

“What do you need?” a volunteer asked.

I took my usual: a cup of Coke, a couple potatoes with salt. But I lingered. What was that smell?

“We have bacon,” the volunteer said. “Do you want some?”

I didn’t even have to think. I’d never have expected it—I usually keep it as bland as possible during races—but bacon had never looked so good, or felt so vital to my well-being. I took four pieces and started down the other side of the mountain, full of new, bacon-fueled life.

Aid stations are a lot like trail races on the whole: some things will always be the same, but each race has its own unique twist. The eccentricities grow when you’re abroad. And plenty of the things you’ll encounter sound strange on paper, but turn out to be just what the doctor ordered when you actually come across them.

Former Trail Runner Associate Editor Yitka Winn, 27, of Telluride, Colorado, was at mile 52 of the Pinhoti 100 in Alabama when she encountered a table replete with raw broccoli and hummus next to mounds of bacon and sausage.

“I exclaimed, “BROCCOLI?! I LOVE BROCCOLI!” and dug in,” Winn wrote on her blog. “A mile later into the woods, as I passed another runner and his pacer … one of them said, ‘hey, wait a minute, that’s Broccoli Girl! Damn, I should have some broccoli, too, if it makes you run like that.’”

“There was also whiskey at most aid stations,” she continues,” and a whole thing of glazed doughnuts available at one of the earlier aid stations.”

And things get weirder overseas. 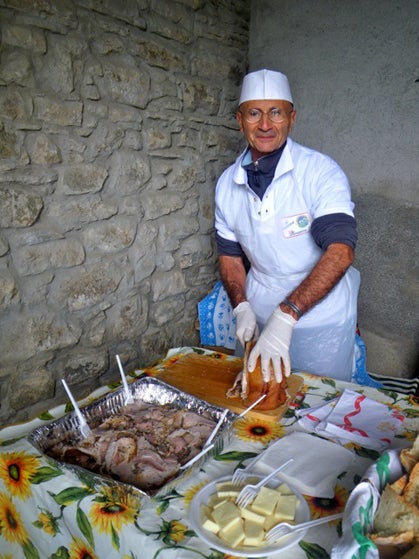 Hitting the wall at mile 20? In Italy, you can eschew the Powerade for roasted pork. Photo courtesy of Sarah Lavender Smith.

Trail Runner Contributing Editor Doug Mayer, 50, of Randolph, New Hampshire, has done plenty of racing in Europe, and has accordingly seen plenty of culture-specific aid station fare. “At the next-to-last aid station at Switzerland’s Mountainman Marathon and Ultra, they were serving—no joke—buttermilk,” he says. “Right from the farm. There was literally a woman dressed in a Swiss farmer’s outfit, serving it.”

To the “Euros,” it seems, whole food is not only appetizing mid-race, but irreplaceable, as fellow Trail Runner Contributing Editor Sarah Lavender Smith found when she showed off a GU packet at an aid station during a trail marathon outside Florence, Italy, in 2010.

“[I] said, ‘In America, this is what we eat on long runs,’” says Lavender Smith, 45, of Piedmont, California.  “They looked puzzled, and when one person translated, they all burst out laughing.”

The Italian volunteers’ lack of envy was understandable: this particular aid station, Lavender Smith says, featured only bottles of wine and a large kitchen setup in an old alpine lodge in the middle of the forest. “A volunteer asked me, ‘pesto o pomodoro?‘,” she says. “I realized he was taking my pasta order … they handed me a steaming bowl of penne with fresh sauce and a glass of red wine.”

As the wine indicates, the discrepancies between continents have their limits. The grand tradition of imbibing at the finish line is alive across the pond, Mayer says, although France’s Fully-Sorniot race, which features well over 1,000 meters of climbing, puts its own twist on the festivities.

“You top out and the moment you’re through the finish line, you get handed a glass of the local white wine,” he says. “It was a warm day when I ran it a few years ago, and I was definitely low on fluid. I crossed the line, downed the glass, and 10 minutes later I was sprawled out in the grass.

“I looked around,” he continues. “There were 30 other people doing the same thing.”

If the end of the race is too far away for the hard partiers among the race field, a few US races (Pinhoti included) can match Lavender Smith’s experience of the mid-race pour.

Famously, Kroger’s Canteen aid station atop Virginius Pass on Colorado’s Hardrock 100 course offers shots of tequila to passing runners. Or is it mezcal? Accounts differ from various runners, possibly due to the distance they’d already covered on the Hardrock course by the time they reached Kroger’s. Or possibly due to the liquor. (For the record, Kroger’s aid station captain Roch Horton confirms that both Tequila and Mezcal were present in 2014, and assures us the serving sizes were extremely small.)

We asked our readers to name the strangest food or drink they had ever encountered at an aid station, and the responses did not disappoint. Some of the highlights include:

And our “Editor’s Choice,” which comes to us from the Ultra-Trail Mt. Fuji in Japan:

What would you add to the list? Let us know in the comments below.

In the meantime, look for the next wave of hydration packs to make accommodations for bowls of pasta, whole baguettes and wheels of gruyere. And for “hydro-flask” to take on a whole new meaning.