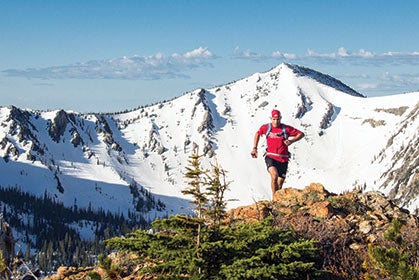 With my running shoes and hydration pack, I felt a bit out of place. After all, clinging to a near-vertical snow wall, kicking steps and punching for grip wasn’t exactly what I had in mind when I set out to run a marathon-length loop through Montana’s Cabinet Mountains Wilderness. Earlier that morning, a washed-out creek crossing had placed the trail out of reach and sent me bushwhacking. When I finally got back on track, the trail played hide-and-seek before disappearing for good under the June snowpack.

My pace slowed to a crawl, and upon reaching the cornice-capped cirque, I was faced with a choice: continue up the steepening snow slope and over the three-story cornice and run 10 miles to complete my circuit or turn around and run 16 back the way I’d come through the tangled route that had led me there. Playing Spiderman on snow and ice while on a solo run through the wilderness pushed the boundaries of my comfort zone, but exhilaration quashed my fear. I cleared the crux and joyfully bounded full stride beyond the point of turning back.

Then came the tracks, fresh as my own. The mood changed again.

The Cabinet Mountains Wilderness covers some 95,000 acres of northwest Montana wild land. Wolverines, wolves, grizzly bears and a healthy population of mountain lions call it home. It’s also one of 15 federally designated wilderness areas in Montana that collectively span millions of acres of mountain-speckled, canyon-gouged wilderness. Backcountry runners have the 50-year-old Wilderness Act to thank for these vast expanses of open space protected for us and future generations. As the language of the act explains:

A wilderness, in contrast with those areas where man and his own works dominate the landscape, is hereby recognized as an area where the earth and its community of life are untrammeled by man, where man himself is a visitor who does not remain.

In Montana, wilderness is never far away. It’s such a familiar part of the landscape that it often goes unnoticed. But in 2014, with the 50th anniversary of the Wilderness Act, the outdoor community paid special attention to the history and ideas behind this law, which safeguards the recreational, cultural, ecological and intrinsic values of certain public lands.

As a historian and backcountry-loving trail runner, I could come up with no better way to honor the legacy of the Wilderness Act than by running through Montana’s wilderness areas. I called it the “Wilderness Running Project.” After conceiving the idea during winter runs on Missoula’s icy trails, I began flipping through stacks of topo maps. Call it cabin fever but, to the optimist in me, the squiggly lines on paper all looked “runnable.” The names also beckoned and begged important questions: should I kick off my wilderness adventure in Welcome Creek or Gates of the Mountains? Should I be more intimidated by local megafauna in the Great Bear or Beartooth? Names can also enlighten: Scapegoat Wilderness, it turns out, takes its name from a towering mountain within its boundaries that looks down on a massive chunk of wild land and the very trout waters that famously haunted Missoula author Norman Maclean in his novel A River Runs Through It. And then there’s the Bob Marshall Wilderness; “The Bob” spans over a million acres and is Montana’s flagship wilderness area—big and wild. 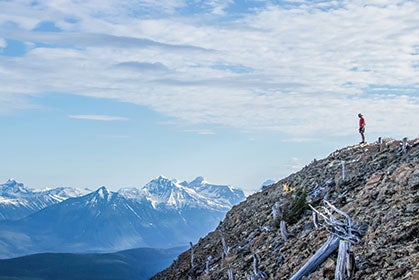 In the Montana wilderness, solitude is never more than a couple miles away.

Running in Montana’s wilderness means following in Bob Marshall’s footsteps. A pioneer of the wilderness preservation movement, Marshall was also former collegiate distance runner who, during a stint with the U.S. Forest Service in Missoula, often logged 30-plus-mile, 10,000-foot days through the wilderness. He traveled light and wore sneakers at a time when his contemporaries donned hobnail boots. It was there, in the mountains, where Marshall formed many of his ideas about wilderness. To Marshall, adventure was at the heart of the experience. In an article published in the February 1930 issue of Scientific Monthly, he wrote:

Adventure, whether physical or mental, implies breaking into unpenetrated ground, venturing beyond the boundary of normal aptitude, extending oneself to the limit of capacity, courageously facing peril. Life without the chance for such exertions would be for many persons a dreary game.

On May 24th, 2014, I planned to set out on the first Wilderness Running Project run, through the relatively small—just over 28,000-acre—Welcome Creek Wilderness southeast of Missoula. After sending a last-minute email to a half-dozen Missoula friends, Chris Kollar was the only taker. Chris is an amazing runner with an ACC Conference Cross Country Title and a course record at the Bear 100 to his credit, but he’s also game for heading into the unknown. We set out to bag a peak and run across the entire wilderness and back, covering some 18 miles. We did none of these things, but we did survive. Chris’s blog post sums up our adventure:

Reaching each wilderness boundary on my Wilderness Running Project, I was a school kid racing to the playground. Occasionally, I shared the trail with others besides Bob Marshall’s ghost. All told, in the two dozen or so Montana wilderness runs I ran in 2014, 10 different people and even two dogs joined me.
Running alone or with companions, I learned that wilderness running provides a sensory overload. Foot travel is simple travel regardless of speed. The solitude draws you in. The feeling of ground beneath your feet connects you with the land and other senses are heightened. The smell can be intoxicating. On one evening run I ventured up the Bass Creek drainage in the Selway-Bitterroot Wilderness—the third-largest wilderness area outside of Alaska—with my trusty golden retriever, Cooper. That night, a quick downpour released every fragrance bottled up in that dry August forest. 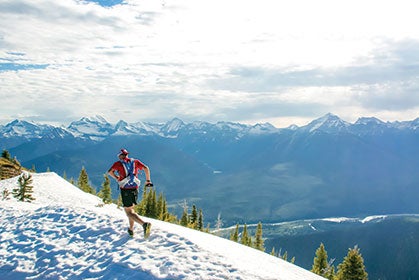 Huckleberry is the taste of Montana wilderness. It’s an endurance fuel from the forest and 2014 provided a bumper crop. The obligatory huckleberry stop added time to nearly every outing. After fellow Missoula runner Jeremy Wolf and I had run 10 hours through the Beartooths—where we traversed some of Montana’s highest mountains—the scent of huckleberry stopped us in our tracks just 10 minutes from the trailhead.

Snow-capped peaks, towering waterfalls and deep canyons are a given in Montana wilderness, but the flora set the forest aglow last summer. On one Bob Marshall Wilderness run above Holland Lake, the beargrass lining the trail stood so thick that I returned painted in pollen from all the flower heads exploding like fireworks against my thighs and chest.

Long-distance foot travel is a fundamental component of most wilderness experiences, and it played an important role in the wilderness preservation movement. Not only did long days in the forests and mountains spawn many of the Bob Marshall-sized ideas behind the movement, but wilderness advocates also used foot travel to make a point. In 1954, for example, the Wilderness Act’s chief architect, Howard Zahniser, joined a cadre of prominent conservationists on a 128-mile protest hike in response to a proposal to replace the historic C&O Canal towpath with a road. The path was saved and later became the site of America’s most historic ultramarathon, the JFK 50.

Footsteps were at the heart of my Wilderness Running Project and led me down paths flecked with tracks laid by grizzlies, wolves and even wolverines. The fresh tracks in the Cabinet Mountains Wilderness belonged to a mountain lion. I followed her path along the snow-buried trail for nearly a mile. It had been walking, then galloping and finally running. I matched her stride cautiously, bear spray gripped firmly in hand. When I finally broke off its trail, I suddenly felt alone. But the untrammeled wilderness all around provided a strange comfort. Perhaps it was the spirit of Bob Marshall … or simply the spirit of wilderness.

Jimmy Grant is a trail runner and historian from Missoula, Montana. He’s also a founder of Montana Trail Crew, a non-profit trail-running community dedicated to trail stewardship and celebrating the importance of open space and wild lands. This article originally appeared in our September 2015 issue.