An introduction to the sport of rogaining, cross-country running’s take on the scavenger hunt 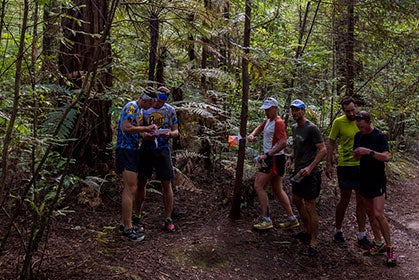 Runners check the map at a rogaine before the Tarawera 100K in New Zealand. Photo courtesy Marceau Photography/Tarawera Ultramarathon.

Plunging off trail through oversized ferns and mossy redwoods, I strained to stay on the heels of Jo Johansen, a top Kiwi trail runner, as she dashed madly through a forest in Rotorua, New Zealand.

It might have appeared as if we were racing, but actually we were teammates collaborating against other small groups of wild-eyed runners partaking in a one-hour version of an event called a rogaine, a sport more popular and better known in Europe and Down Under than in the United States.

We scrambled through scratchy vegetation toward a gully, clutching maps in our hands, until another teammate yelled, “There!” and pointed to a small basket-like contraption, which marked a checkpoint. Johansen fearlessly slid down the gully’s side and climbed up the other embankment to reach the checkpoint and punch our team’s scorecard with a special instrument attached to the basket.

I felt a surge of excitement and thought, Hurry, let’s get out of here before the others spot us and find it! In a mere 20 minutes since the start, an us-against-them pack mentality had taken hold, and I wanted our team to find as many of these checkpoints as possible without giving away clues to other teams.

A rogaine feels like a treasure hunt that mixes navigation with cross-country running. Teams of two to five runners dash around trying to find as many hidden checkpoints as possible within the allotted time. A short, one-hour rogaine involves running fast—but not so fast you can’t look around to spot landmarks on the map—and strategizing about how to find the checkpoints as efficiently as possible in the confusing terrain. None of the teams follow a pre-determined route; only the wavy lines and points of topographical maps, along with the teammates’ quick wits, serve as guides. 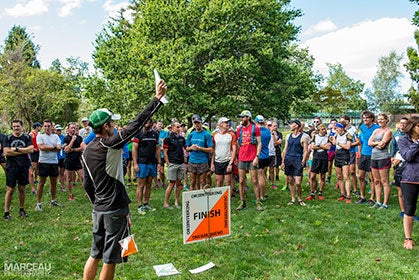 This rogaine took place two days before the February 7 Tarawera Ultamarathon, thanks to race director and founder Paul Charteris, who wanted to bring runners together to explore the local forest and get to know each other.

Several runners thought the rogaine was a brilliant twist on a traditional pre-event fun run, and hoped more race directors would consider hosting one.

“It’s awesome,” says Michael Wardian of Arlington, Virginia, who placed fifth in the Tarawera 100K. “What an incredible way to hang out with friends, dork out in the forest, play hide and seek and do speedwork.”

Inevitably, some Americans will wonder if a rogaine had something to do with the hair replacement product of the same name, but there is no connection. The name “rogaine” is a combination of the names of the three Australian men who organized the first official rogaine in 1976 (Rod Phillips, Gail Davis and Neil Phillips—RoGaiNe). It also stands for “Rugged Organized Group Activity Involving Navigation and Endurance.”

In a more demanding ultra-distance rogaine—one lasting 6, 12 or 24 hours—teams are given the map with checkpoints marked on it shortly before the start, so they have a set amount of time to strategize about which checkpoints to seek out in which order. Another element of strategy involves getting back to the start/finish area at a specified time, hence planning a return route to avoid penalties for being late.

Ultrarunner Garth Reader of Los Alamos, New Mexico, has competed in a couple of international rogaines and calls them “a thinking type of sport. Strategy, skill, as well as physical fitness are involved. You can’t just gut your way through them. … I’m sure [rogaines] would resonate with many trail runners—at least the ones who don’t get wrapped around the axle about a well-marked course!”

The sport also combines an element of fastpacking, as participants in half-day or full-day rogaines use packs to carry food, compulsory foul-weather gear and (for the 24-hour events) some sleeping gear, since aid stations are non-existent.

Last year, trail runner Danny Crookes of the Isle of Anglesey, North Wales, participated in the UK’s only 24-hour rogaine, called the Marmot 24, which was his first time trying a rogaine. He’s signed up to do it again on July 25.

Like many first-time experiences, Crookes didn’t know quite what to expect and learned from his mistakes. He and his teammate made a couple of basic navigational errors, “mainly because we assumed we were going the right way instead of getting the compass out and confirming,” he recalls. “One of these errors cost us around six hours, as we made a decision to bivy up until daylight to confirm our location. This ultimately led to us returning to the event center after just over 22 hours, as we didn’t think we could get another [checkpoint] and return without accruing a time penalty.”

Crookes and others find rogaining appealing on many levels: the camaraderie of teamwork, the scenery and challenge of the mountainous terrain, the anything-goes nature of finding and reaching the checkpoints. Plus, says Crookes, “The additional challenge of navigation means that you’re constantly having to think, whereas during an ultra, you can occasionally switch off and get lost in your thoughts.”

The International Rogaining Federation website lists several dozen events worldwide, including a handful in the United States such as the “Raccoongaine” on March 22 near Pittsburgh, Pennsylvania, and the “Get Stoked Rogaine” on May 2 in Stokesville, Virginia.

Charteris, of the Tarawera Ultra, says organizing and hosting a short rogaine is relatively easy—in some ways, easier than a typical 5K fun run.  The RD has to create a map and hide checkpoints, but doesn’t have to worry about marking a course. Plus, he says, “no one has to worry about getting lost, because that’s half the point.”

Sarah Lavender Smith is a Contributing Editor at Trail Runner who ran the Tarawera Ultra 100K last Saturday and PR’ed in a time of 11:57. Even though she can barely find north with a compass and can’t decipher most topo maps, she would like to try another rogaine.