Trail running and the outdoors are often heralded as being very democratic, something that everyone has access to. Anyone with a pair of shoes can get outside and trail run, right? Well, no. Even something as seemingly simple as trail access is affected by race and income.

In short, there is an unequal distribution of nature and access to the outdoors in America. The stories of Christian Cooper, threatened with violence while bird- watching in Central Park and the murder of Ahmaud Arbery while jogging in Georgia are among the many stories of Black, brown and Indigenous people who, while trying to recreate outdoors, have been threatened, killed or made to feel unsafe or unwelcome.

While trail runners might imagine themselves a welcoming and accessible group, according to the most recent Outdoor Industry report, 74.8 percent of outdoor recreators identify as Caucasian. This statistic is not an anomaly or an accident, but a predictable outcome of our nation’s racist systems and history.

Historically, the United States has systematically segregated and excluded people of color from public lands and other natural places where one might recreate or trail run. From the Civilian Conservation Corps to the National Park System, the nation’s public lands have been bastions of legalized and institutionalized racism.

People of color have been excluded from the American conservation movement. For over a century, the movement to protect parks, public lands and other natural places have been dominated by white people and white perspectives. Framing conservation through this exclusive lens has perpetuated the racial divide in access to nature as well as the right to a healthy environment.

So, where do we go from here, and what does this have to do with trail running? In the wake of this summer’s national reckoning with racial injustice and a renewed interest in environmental protections under the Biden administration, environmental justice is having a bit of a moment.

From Instagram to the White House, a renewed focus is being paid to the intersection of race and the environment. Trail runners, as the fastest growing outdoor recreation group, with a vested interest in both preserving natural landscapes, trail access, increasing participation in the sport and equitable treatment of fellow humans, can lead the way in environmental justice.

“We should not blind ourselves like many before us to the way our society picks and chooses who is worthy of living with clean water, clean air, quality food and health,” says Peyton Thomas, a scientist and professional trail runner for Patagonia. “As an athlete I can speak out for discriminated people so that they too can enjoy the same outdoor places I do.”

Environmental justice, sometimes called intersectional environmentalism, is the fair and equitable treatment and intentional, meaningful involvement of all people regardless of race, color, nationality or income when it comes to environmental problems and policies.

Environmental racism is the conditions under which, whether by conscious design or institutional negligence, actions and decisions that cause disproportionate exposure of communities of color to environmental hazards and health burdens. For example, low-income communities and communities of color are unequally exposed to polluting infrastructure like power plants, landfills, trash incinerators, shipping ports, uranium mines and factories. Black Americans are 75 percent more likely to live near facilities that produce hazardous waste; the majority of people living within 1.8 miles of a polluting facility are POC; Black families making $50,000 to $60,000 a year are more likely to live in polluted areas than white people who make less than $10,000 a year, meaning income alone does not account for the discrepancy. Black Americans are exposed to 56 percent more pollution than they generate, Latino populations are exposed to 63 percent more, and white Americans are exposed to 17 percent less. 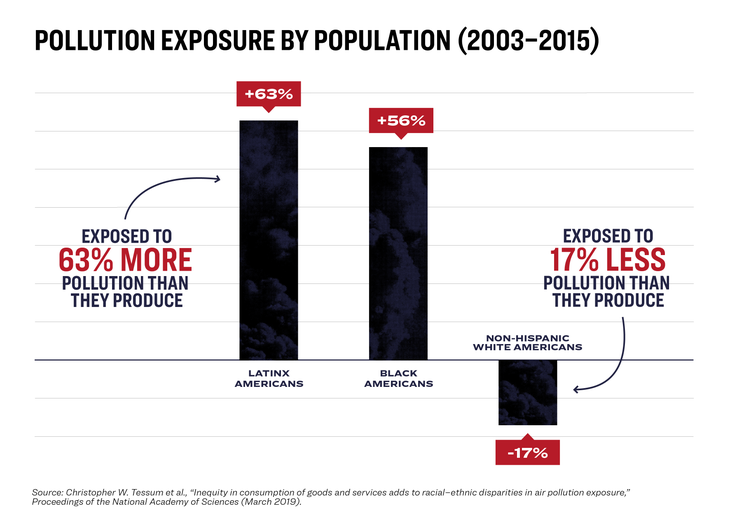 Environmental justice expands what might traditionally be thought of as our “environment,” a pristine trail that winds through a national park, to include anywhere we “where we live, work, play, learn and worship as well as the physical and natural world,” as defined by Dr. Robert Bullard, called the Father of Environmental Justice, and a professor of urban planning and environmental policy at Texas Southern University.

“Environmental justice means acknowledging the past and using that evidence to reconcile the future,” says Thomas. “It means respecting the rights of all humans to live in prosperity with each other and with our shared planet. It means being responsible and absolutely holding people, companies, governing bodies accountable when they harm others by taking away access to resources, access to a future where people can be autonomous human beings.”

This expanded lens takes into account how different aspects of identity and class affect one’s access to outdoor-recreation infrastructure, as well as healthy spaces to live, play and work. It acknowledges how privilege, power and oppression are central to our understanding of the impacts of climate change and environmental protection. Those might sound like some pretty grandiose or abstract ideas, but they’ve been circulating in our national ethos for decades.

Where Did It Start?

From pretty much the beginning, the American environmental movement has been dominated by white-centric conservationism that prioritized the preservation of “wilderness” (a term that has been criticized for its erasure of Indigenous peoples, who lived, and built entire civilizations in the lands that we now call “wilderness), but did not specifically address the needs of people broadly, and the needs of urban communities specifically.

The history of public lands in the U.S. is rooted in the violent dispossession of lands from Native Americans. For centuries, settler-colonists have displaced tribes from their ancestral homelands and instigated the deliberate destruction of vital natural recourses as a tool of genocide against Indigenous populations.

“Most trails represent our country’s original injustice, the dispossession, displacement, and near decimation of Indigenous peoples. This land grab means trail runners owe it to the world to be involved in the environmental justice movement. Simply put, it’s a matter of honor,” says Thasiah.

In the early 1960s, Latino farmworkers organized by Cesar Chavez fought for workplace rights, including protection from harmful pesticides used in agricultural work. In 1967, African American students in Houston took to the streets to oppose a garbage dump that had already claimed the lives of two children. The next year, residents of West Harlem fought unsuccessfully against the development of a sewage treatment plant in their community.

A protest in Warren County, North Carolina by Black activists against the filing of a landfill drew national attention in 1982. Six weeks of marches and nonviolent street protests followed, including more than 500 arrests. Though the protest was unsuccessful, and toxic waste was eventually deposited in the landfill, their story caught national attention and sparked a movement.

African American civil rights leader Benjamin Chavis coined the term “environmental racism” in 1982, describing it as “racial discrimination in environmental policy-making, the enforcement of regulations and laws, the deliberate targeting of communities of color for toxic waste facilities, the official sanctioning of the life-threatening presence of poisons and pollutants in our communities, and the history of excluding people of color from the leadership of the ecology movements”

Today, surveys of racial minorities consistently reveal that they are more concerned than whites about climate change, and more supportive of policies to fix it. Communities of color are leading the way in climate justice, and it’s past time the majority-white outdoor community caught up.

Why Should Trail Runners Care?

While the coverage in this magazine and by the outdoor industry more broadly has tended to focus on climate action through the narrow lens of “this is how this affects you, or the trails you run,” environmental justice demands a broader approach. Failure to address the root inequities that lead to unequal trail access upholds racial division, something that trail runners should be interested in dismantling. Dialogue is a good first step in promoting true inclusion. Without acknowledging the disparities that exist in environmental protection and outdoor access, the issue can’t be fixed.

“Our fellow BIPOC runners are disproportionately threatened by environmental pollution and degradation, and by negative climate impacts,” says Thasiah. “We owe it to our own broader running community to be involved in environmental justice.”

The good news is that there is a broad overlap of issues that matter to trail runners and the environmental-justice movement. Actions taken to protect trail access can have the double benefit of preserving cleaner air and water for everyone. Investing in more sustainable industries like renewables and outdoor recreation tends to benefit communities of color and rural economies, which has a trickle-up effect on the health and economy of our nation as a whole.

What Can Trail Runners Do?

If nothing else, trail runners are people of action. And there are concrete steps and policy recommendations that experts and activists say will help rectify past and present injustices.

“One first step would be talking with your Indigenous people in your area about acknowledging their historic and current stewardship of the lands you run,” says Thasiah. A land acknowledgment can be a formal statement or an informal location tag that recognizes and honors the Indigenous Peoples while drawing attention to the enduring relationship that exists between Indigenous Peoples and their traditional territories. “Talk with runners in your community about working toward greater equity in accessing safe and clean outdoor spaces.”

Often, environmental-justice initiatives are small and localized, and might not explicitly identify as an “environmental justice” initiative. Educating yourself around the various issues that connect to environmental justice—like water quality, sanitation, and indoor health—and then join groups focused on those individual issues within your community.

Trail runners should push for policy that funds the creation of new parks and open spaces, like the Great American Outdoors Act or the CORE Act. While the conservation movement has traditionally focused on protecting remote wilderness areas, trail runners and policymakers should turn their attention to increasing protections and access to natural areas near urban centers, especially to those with ties to historically nature-deprived groups, communities of color and low-income communities.

Trail runners should urge land managers to redouble their efforts to engage with and attract a more diverse array of visitors through outreach programs, cultural programming and safe and equal access to all facilities. Signs at parks and trailheads should be multilingual and culturally appropriate.

Trail runners should push for improved tribal consultation and expand co-management opportunities. Indigenous-led conservation has been shown to improve lands’ biodiversity and carbon-capturing abilities. Trail runners should make an effort to learn about and support Indigenous land stewardship in their community.

In the U.S. today, the color of one’s skin and size of one’s bank account is a predictor of whether one has safe access to trails and all of their benefits. Trail runners can act on the local and national level to help correct the racial and economic factors that contribute to unequal trail access.

* The author works in an advisory capacity with the non-profit Runners For Public Lands.

Zoë Rom is the Associate Editor of Trail Runner, host of the DNF podcast and has a master’s degree in Environmental Journalism from the University of Colorado.

How To Build A Sustainable Race

Know Whose Land You’re Running On