… Could be better. So why don’t we name more runs? 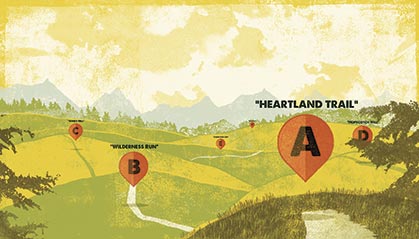 El Sendero Luminoso. A Steep Climb Named Desire. The Thaw’s Not Houlding Wright (a combination of three last names). I kept flipping through the magazine. A climber stretched outward for an impossible undercling, his body as chiseled as the surface he was interacting with. I stared at the photo, read the caption and turned to another caption, wondering ….

Edging Skills or Hospital Bills. How and why was the climb called that?

I remembered a line from high-school literature class.

“What’s in a name?” Juliet asks in Romeo and Juliet.

She argues, “It is nor hand nor foot … nor any other part / Belonging to a man.”

There is something in a name!

Though I’ve always gravitated more toward running than climbing, my preferred distractions have often been climbing magazines. It wasn’t the biceps, cool metal gear or chalk bags, and it certainly wasn’t the crick in the neck you get at the bottom of the climb looking up at your partner for what seems like hours. A love for names and a curiosity about from whence they came drew me to those pages.

I was always a little saddened that, to my knowledge, runners didn’t have the same opportunity to express themselves in this strange, lyrical way.

Then, a couple of years ago, some friends convinced me to sign up for Strava, one of the many apps that allow you to track your miles. Strava provided me with an elevation profile and pace. But what really caught my eye was a chance to name my own run. Finally!

I was presented the challenge and excitement of distilling a unique experience down to a couple of words. And the modern world of computers and information sharing would even allow me to bring individual runs to a public arena.

I scoured the Strava website looking for inspiration for naming my next run. Initially, what I found was to be expected—there were “warm-ups,” “cool-downs” and “shake-outs.” Run titles mentioned who people were running with, where they ran and how they felt. Morning Run. Lunch Run. Evening Run. Sometimes the title mentioned what they drank immediately after–usually beer, but sometimes coffee.

I was left a little disappointed that we runners, given the opportunity, generally couldn’t come up with some titles as strange as those of the climbers. I wanted names that were whimsical and concise. Making sense was secondary.

I didn’t agree with Juliet. I just wasn’t finding what I wanted on Strava. That was when I spoke to a friend who immediately asked if I had seen Alex Varner’s Strava account. I knew Alex … or I should say I knew the backside of him, getting smaller and smaller as he pulled away from me from the starting line to the finish.

I looked him up and the first displayed title was a run that Alex took through Washington, D.C.: “‘Hey Blinkin.’ Did you say, ‘Abe Lincoln?’ Naw, I said, ‘Hey Blinkin.’”

Next I found where he had named a long run through the Marin Headlands back in the Bay Area, “You may ask yourself, well, how did I get here?” and another from a mid-week run in the Redwoods outside of San Francisco: “The only living boy in Muir Woods.”

For a run along the Pipe Line Trail, Alex came up with: “Only Rob Ford hits the pipe harder than I do.”

“[A] rose / By any other name would smell as sweet,” Juliet tells us.

Sure, I thought, but how would you tell your friends about it?

I left the website and headed out the door. A route that had already been run, segmented and named was waiting. “Rocket Mile” would start me off, and I hoped I’d pass “Cardiac” well enough, because the words “Stairs of Despair,” “Puke Hill” and “Escape the Troll” stimulated my imagination and added a spring to my step.

That look of confusion on Rickey’s face means he’s thinking of a clever name for his own run.