West, West Coast, Midwest … Home is where the kicks are 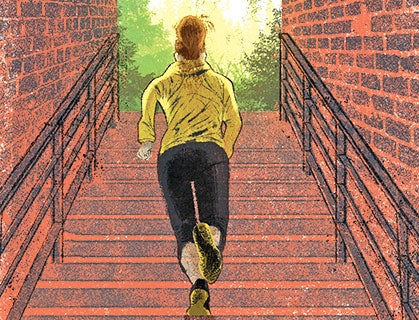 I roll up Market Street past the Civic Center, which on some evenings looks like the zombie apocalypse, given the characters that congregate here.

For a few hundred feet, I keep pace with the taxis and the bikes. A yellow art-deco streetcar rumbles past, vibrating the earth: steel on steel. I dart across Market and head a few blocks down Valencia, into the Mission, where the air smells of tortillas and marijuana, and the fashion is hipster 2.0.

I cut right up 17th and into the flamboyant heart of the Castro. Cattycorner to me are two men chatting who, with the exception of a dark-leather tan and a pair of sneakers on one, stand completely naked.

A few years ago, when I told my friends I’d be moving to San Francisco, every one of them had the same reaction: How’s that going to be for running? They know me for who I am—a small-town mountain boy never far from a trailhead. I told them it was going to be great, even though I was wondering exactly the same thing.

I was following my girlfriend’s coattails into the city, grateful to adopt her friends and borrow her car. Getting to know the city as a runner, however, was my own territory.

Within the first few months, I had woven dozens of intricate loops throughout the city, sometimes in search of trails, sometimes out of curiosity. Some loops I never ran a second time, while others became personal classics.

Now the street climbs and climbs, as shops and bars give way to a residential tameness. I scan for the small, sneaky staircases that often cut up city hills more directly.

This is my last run in San Francisco. Behind me, back at our apartment, a moving truck is packed to accompany us to the next stage and place. Rooms echo with emptiness while fresh toothpaste has dried as filler in the little holes we’d put into the walls over the past couple of years.

“How’s the running gonna be there?” one asked. “You know there’s no mountains, right?”

Still climbing, I pass the last of the houses before the final pitch up Twin Peaks. I hop the guardrail, where I finally find what I’m looking for—a steep trail of crushed red chert shaped by old railroad ties into stairs. The wind picks up while a conspiracy of ravens hovers overhead. I run up and over the first peak, down to the saddle and up the second peak, where there are always fewer people.

From the 925-foot summit, I admire the landscape before me—the Ferry Building blocking Market Street from running into the bay, the Bay Bridge spanning over to the East Bay. The cold, white solitude of Alcatraz, the far-off summit of Mount Tamalpais, the houseboats of Sausalito and the red towers of the Golden Gate Bridge span the vista.

With my eyes I trace the line of my enduring favorite run—an 11-mile loop along cliffs over the Pacific Ocean, past the Golden Gate Bridge, through groves of eucalyptus and cypress in the Presidio, back through Golden Gate Park and home.

“Nine of those miles,” I’ve often bragged, “are on trail.”

We live in a time where moving around the country and globe are commonplace. With the help of technology, we are able to maintain a sense of community with friends and family regardless of where we are living. Getting to know our immediate world, however, is up to us.

How’s the running going to be there? I ask myself.

Rickey is wondering how a steady diet of cheese curds and beer will affect his running.