Summer in paradise? Check out these camps for trail runners—and enter to win a spot in this year’s Run Your Way to Optimal Health Retreat in Carbondale, Colorado

You’re never too old for summer camp. That’s why we dug up five trail-running camps across North America that each do things a little bit differently. From a holistic retreat in the Rockies to a cabin on the 58th parallel, these are the camps we’d like our parents to send us to.

You can also be entered to win a spot in one of the camps, Run Your Way to Optimal Health Retreat, by visiting our contest page here. Contest deadline is June 8, 2014. 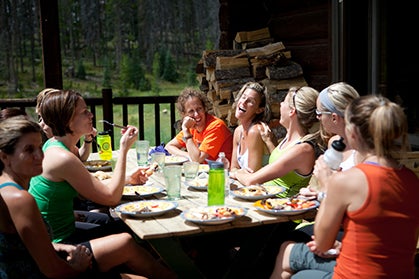 Elinor Fish, runner for over 25 years, writer and entrepreneur, takes a multidimensional approach to running and emphasizes a balanced lifestyle to reduce stress and increase energy and enjoyment. The $697, four-day Run Your Way to Optimal Health Retreat engages individuals in yoga lessons, lectures, cooking demos and guided group runs of four to 12 miles in Carbondale, Colorado—home of Trail Runner Magazine!

“Carbondale makes a great hub because of the easy access we have to trails around town and nearby Snowmass and Aspen, where the trails are world-class and offer spectacular views of the Rocky Mountains,” says Fish. The retreat also incorporates a local yoga studio which concentrates on hip and joint mobility, stretching and lengthening and core strengthening. Though in the past Fish’s retreats have been limited to women, the 2014 session will be co-ed.

“Days were filled with relaxed trail runs where we stopped often to practice tips and techniques,” wrote Jenn Hughes, a 2012 camp participant, on her blog. “The retreat is geared for the beginner to intermediate level runner, but Elinor does an incredible job of relating to [everyone] regardless of where [they are] at with [their] running.”

Fish performs a gait analysis of each of her campers and offers instruction on nutrition, recovery and key trail-running techniques such as running uphill, downhill and on uneven terrain. There is plenty of free time built into the schedule to allow everyone to relax and chat.

Want to win a spot in the 2014 Run Your Way to Optimal Health Retreat? Click here to learn how. (Page will open in a new window.)

Or, read on for 4 more trail-running camps to check out this year … 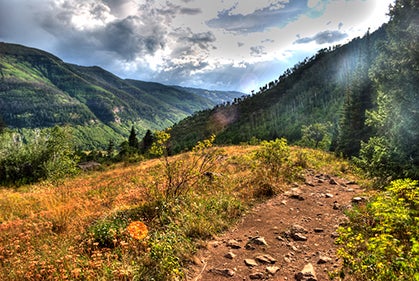 Elite ultrarunners Jenn Shelton (winner of the 2007 Rocky Raccoon Ultramarathon) and Rickey Gates (five-time member of the U.S. Mountain Running Team) will lead a group of 12 runners on a 100-mile adventure along the peaks and ridges of the Continental Divide. The journey will take the runners from Aspen, Colorado, to Vail, Colorado, stopping for rest at 10th Mountain Division Huts along the way. This seven-day trip costs $1,100, which includes local transportation, hut fees, food and a Salomon trail-running pack.

It is recommended that athletes arrive in shape and acclimated to the elevation, but Gates and Shelton emphasize that the goal of the trip is to have fun. “I believe that the stronger you come into the trip the more fun you will have,” says Gates on the Hut Run Hut website. “With that said, I also believe that this trip is accessible to anybody that is up for the challenge. If you believe that you can run 100 miles through the Rockies, then I do too!” 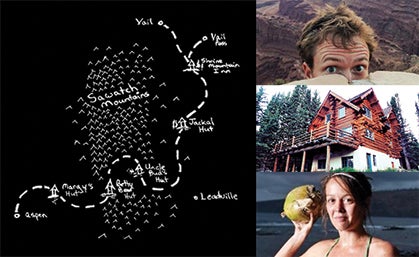 This is Hut Run Hut’s inaugural year, and a project that has been a long time coming. Gates worked in the 10th Mountain Division Huts from age 17 to 20, performing maintenance work and guiding visitors. It was during these mountain summers of Gates’s youth that the idea for Hut Run Hut was born. “The huts provide an atmosphere where your life slows down to the pace that maybe it should be all the time,” says Gates. He also says that participants should not think of this trip as training, but as a way to connect more with the outdoors. “I don’t care if people take a minute off their 5K time. If everybody has a lot of fun, that’s my main goal.”

While the 2014 Hut Run Hut is already filled to capacity with a waiting list of over 80 people, plans are in the works for next year’s trip. 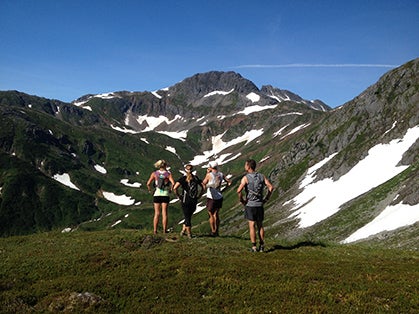 Runners take in a view of Alaskan peaks. Photo by Melanie Fitzgerald.

This camp in Juneau, Alaska, directed by Geoff Roes (winner, 2010 Western States 100-mile Endurance Run), is offering three sessions this summer to accommodate demand. For the past three years, trail-running enthusiasts have flocked to the Alaska Mountain Ultrarunning Camp (AMUC) to explore the trails of the 49th state. “The views, the wildlife and the Alaskan culture are simply not possible to match in most other places,” says Roes. If he could describe the (AMUC) in three words, they would be: “big, wild adventure.”

There is a 12-person cap for each session, which keeps things intimate, and the $1,475 price tag covers local transportation, food—made from scratch with unprocessed, organic ingredients, when possible—lodging, and clothing and gear from camp sponsors.

For five days and six nights, participants will make their home at Jubilee Cabin. “It sits on the edge of [the] Pacific Ocean with amazing views and nearly constant marine wildlife sightings,” says Roes. “The open set up of the cabin’s interior really brings people together and gives us a space for a dozen people to be in close proximity for several days but not feel too crowded.”

It is recommended that participants are comfortable running a combined 20 hours over five days. “This camp might not be for everyone, but if you’re adventure minded and love spending long days out in beautiful mountains and eating a lot of tasty food in the evenings then this will almost certainly be a good match for you,” says Roes. 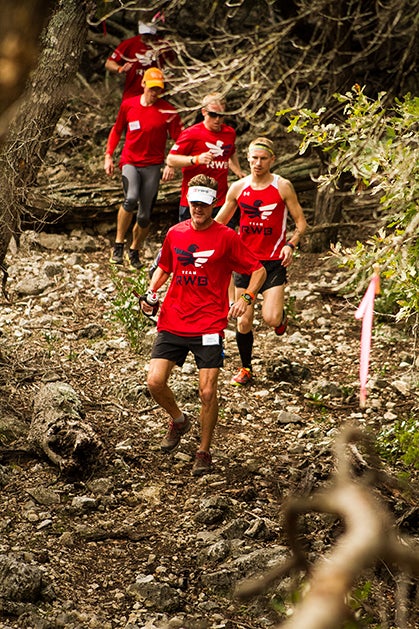 Participants in the Team Red, White and Blue (TRWB) Trail Running Camp will rub elbows with a host of elite men and women, including, but not limited to, Jason Schlarb, winner of the 2013 Run Rabbit Run 100; Max King, winner of the 2011 XTERRA Trail Running World Championships; and Alison Bryant, 2nd-place finisher in the 2012 La Sportiva Mountain Cup.

It’s the access to this crew of elite mentors that Liza Howard, an avid runner and member of the TRWB Trail Running Camp Advisory Board, says sets this camp apart. With a 5:1 participant-to-mentor ratio, the trail runs and lectures on nutrition, basic first aid and injury prevention have a personal feel.

TRWB, an organization which helps veterans integrate back into civilian life, has hosted the trail-running camp at Camp Eagle in Rocksprings, Texas for the past two years. “Camp Eagle has a really good mix of singletrack and technical terrain,” says Howard. The TRWB Trail Running Camp culminates each year with an obstacle course complete with mud pit and river crossing. Howard says that watching the elite athletes race each other on the course is one of the highlights of the camp.

The price of the 2014 camp is yet to be determined, but will cover the food, lodging and lecture sessions for the duration of the stay. TRWB welcomes all military personnel, active or retired, as well as civilians to take part. “The camp is an opportunity for folks to talk to vets on runs and draw them into the trail-running community,” says Howard. “The big picture is that it is a wonderful community to be a part of.” 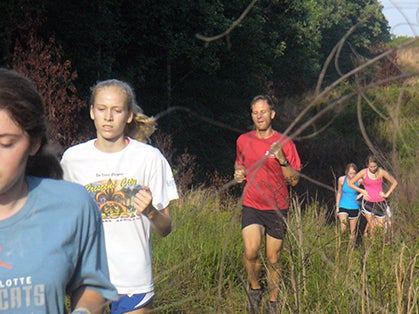 Runners of all ages hit the trails of Tennessee. Photo by Joe Dombrowski.

Adult and youth trail-running camps are being offered at Sewanee: The University of the South, in Sewanee, Tennessee for runners 13 years of age and older. With access to over 50 miles of on-site trails (everything from singletrack to fire roads), the Mountain Trails XC Camp immerses participants in the natural landscape of the Cumberland Plateau.

Each day there is a longer morning run and a shorter afternoon workout (including fartleks and hill runs), morning and afternoon lectures, and afternoon and evening activities (such as movies, indoor rock climbing, ultimate Frisbee and soccer). “We offer at least two runs every training session to cater to campers of different abilities and fitness levels,” says Michele Dombrowski, Co-Camp Director. The daily discussions will also be geared separately to adult and youth runners.

“I think there are two things in particular I want campers to leave Mountain Trails with,” says Michele. “First is an appreciation for just how fun and rewarding trail running can be. Secondly, I want them to leave knowing the camaraderie of other runners [and] trail runners like them.”

The seven-day, six-night camp costs $575 for adults and $500 for youth, though alternative prices are available for couples and teams and a four-day short session. Runners will train under the tutelage of Coach Joseph Dombrowski—a collegiate cross-country coach for nearly 20 years—and his staff, and have access to many Sewanee resources (including the dining hall, tennis courts, gym and air-conditioned dormitories).

Since its maiden year in 2011, the camp has grown from seven participants to 65.