From 13th-century Scotland to Middle Earth, trail running’s alive and well in Hollywood

When you’re looking for that extra mental boost before an important race, the best thing to do is to watch someone else doing something awesome. More and more films document record-setting pushes on classic trails and distant peaks, and trail-running film festivals have sprung up to screen such movies and celebrate the culture of the sport.

Of course, if you’re looking for something a little different, Hollywood’s been making films about trail running for years—they’re just not labeled as such. These four flicks conjure up bygone—or entirely fantastical—times when running over tough terrain was done out of necessity, not just for running’s sake, and a DNF could mean death. With all the run-inspiring landscapes and adrenaline-laced drama of the best trail documentaries, they’re just what the coach prescribed to get out of a slump and start tearing up the trails.

“I’m wasted on cross country. We dwarves are natural sprinters!” — Gimli the Dwarf

Three guys chase two other guys into a forest, and meet up with an old bearded man they thought they’d lost to a bad fall in a canyon. Turns out he just needed a nap and a change of clothes. Elsewhere, a minimally clad, emaciated creature mumbles to himself and scrambles up mountainsides, followed by two guys with gnarly feet carrying unnecessary amounts of gear and food. Sounds like an ultra to me! And that’s just the first 30 minutes of “The Two Towers.”

Of course, it’s not just the grueling parts of trail running that you’ll find in the film. A feeling of purpose and camaraderie with our fellow long-distance travelers is something many of us have found on the trails, and nothing embodies this better than the Lord of the Rings trilogy. Needing to dispose of a powerful ring, four hobbits, a dwarf, a human and an elf travel ultra distances through the rough terrain of Middle Earth (a.k.a. New Zealand) to the hell-like forges of Mordor. They overcome countless obstacles, encounter literal “trail magic” and grow closer throughout their journey—a natural result of any arduous trial of will and endurance, as anyone who’s done a multi-day stage race will attest.

Target audience: Those who run in Vibram FiveFingers (sometimes referred to as “hobbit feet”) and enjoy transcendent hallucinations while running, or just find the wide-open mountain scenery of New Zealand inspirational. 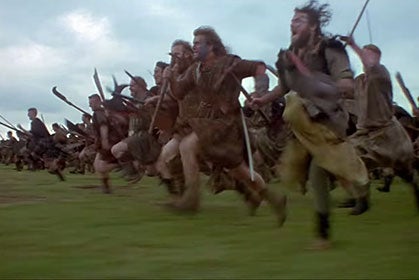 No film better portrays the atmosphere of a cross country race than “Braveheart,” the well-known story of Scottish hero William Wallace, with competing sides facing off on endless green fields and kilted scouts who take off across the hills and glens of the countryside. There’s the same uncontrollable excitement runners feel toeing the line at a cross country meet, inhaling the cool scent of grass before taking off across the field of glory.

There are few key differences, of course. In the case of “Braveheart,” the rebelling Scots run directly toward, rather than away from, the competition (who also have horses, archers and 12-foot-long spears). Often the highlanders are carrying human-length claymore swords, which don’t make the cut in most of our running kits.

Even runners who don’t care for the carnage of cross-country battles—ahem, races—will enjoy the setting of “Braveheart.” Scotland is on many trail-running bucket lists and this film’s highland scenery doesn’t disappoint.

Best race scene: Mel Gibson’s Wallace trots up a mountain to the nasal vibrato of the bagpipes as legends of his heroism spread.

Takeaway: Listen to some bagpipe tunes before or during your next race and tell me you’re not a little more pumped-up than usual. 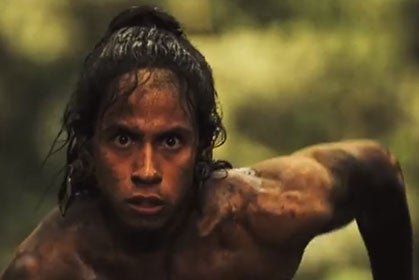 If you think your side stitch is bad, imagine what it’s like to sprint for your life after being hit in the side with an arrow.

Set in early 16th-century Central America, “Apocalypto” tells of a young tribesman, Jaguar Paw, who must escape human sacrifice and evade his Mayan captors to save his family.

The film opens with the main characters flashing through a green blur of plant life on a tapir hunt. Later, Jaguar Paw works on his agility by zig-zagging across a dirt stadium with arrows and atlatl-thrown darts hurtling by him. Then, he flees his namesake animal, jumps over a waterfall and hurls himself through dense flora and fauna, all while defeating hardened Mayan warriors.

Target audience: If you love jungle trails, high-stakes hide-and-seek or running barefoot or in huaraches, this is the film for you.

Takeaway: You aren’t really in that much pain. 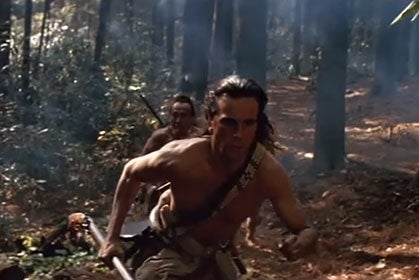 For those, like myself, native to the hills and woodlands of the Northeastern U.S., “The Last of the Mohicans” is sure to bring back memories of darting through the forest with reckless abandon after a deer. Or, more likely, alongside your friends.

Taking place during the French and Indian War, the film, based on the novel by James Fenimore Cooper, tells of three Native American trappers and their journey to save the daughters of a British Colonel.

For the protagonist, Daniel Day Lewis’ Hawkeye, and his two closest friends Chingachgook and Uncas, the best way to fight a battle is to run through it. While we don’t condone running with a knife or musket, sometimes you don’t have a choice but to hurdle through a waterfall, firearm (or two) in hand. The last three Mohicans blaze over the bare rock faces and mountainside trails of the Appalachians in pursuit of their enemies, accompanied by fiddle music powerful enough to help anyone hold an anaerobic pace for hours.

Takeaway: Hunting makes for great cross training, as evinced by Hawkeye, who tracks and hunts deer by sprinting through the forest, stopping and immediately firing off a kill shot with a flintlock musket, all the while looking like his heart rate hasn’t risen above 50.