Trail ultramarathons are always a test of the human spirit. Sometimes the test is harder than usual

A video by Run Steep Get High showing Timothy Olson’s heroic struggle to finish the 2014 Hardrock 100.

At the Hardrock 100 Endurance Run earlier this month in Colorado’s San Juan Mountains, Timothy Olson went out with the leaders and was in the lead pack. But the legendary late-charger didn’t have his usual wheels. His race went downhill, hard and fast; soon he was out of contention and off his feet.

No one would have faulted him for dropping out. It simply wasn’t his day, and it takes a great day to run 100 miles on a course as challenging as Hardrock’s. Several other big names—past winners of the race, even—would DNF Saturday and Sunday.

But Olson didn’t quit. He got up, trudged on and finished 13th in 30 hours and 18 minutes.

In honor of Olson’s never-say-die effort, we have compiled a list of 10 inspirational trail ultra finishes from recent years. There are countless other examples, but here are a few of our favorites, admittedly mostly from 100-mile races. Be sure to leave your own in the comments below.

10. Rising from the Dead 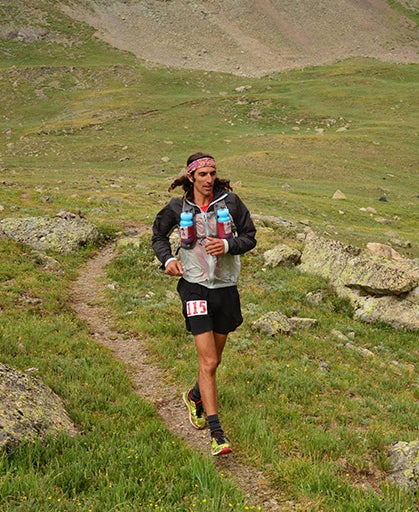 Felled by stomach issues early in the race, Coury lay at the Grouse Gulch aid station (around mile 42 on the 2013 course) for over four hours. “Just when I thought I had everything figured out with my nutrition and racing during 100 milers, I’d been thrown another curve ball,” Coury wrote in his race report. “My dream race was crumbling around me and there was nothing I could do at this point.”

But rather than succumb to his calorie deficit and dizziness, he adjusted his nutrition strategy, recovered and rose to clock the fastest split of the entire field from Grouse to the finish (over 40 minutes faster than race winner Seb Chaigneau), which he reached in 31 hours, 19 minutes and 29 seconds. 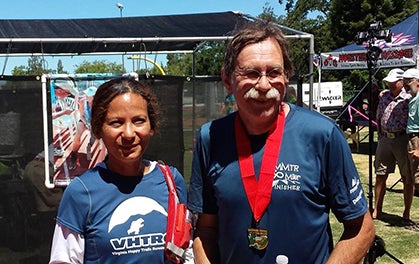 Tom Green with his pacer, Judith, at the finish line of the 2014 Western States, Green’s 10th WS finish. Photo by Mark Melvin.

In 1986, there were only four 100-mile races in the United States: Old Dominion, Western States, Leadville, and Wasatch, all held between June and September. While Green was not the only runner to attempt running all four that year—and certainly not the runner making the most well-publicized attempt at it—he was the only one to complete his attempt (including a sub-24 at Western States and a sub-22 at Old Dominion), making him the original finisher of the Grand Slam of Ultrarunning.

The Slam, which has since replaced Old Dominion with the Vermont 100 in July, is still considered one of the toughest feats of endurance on the planet. 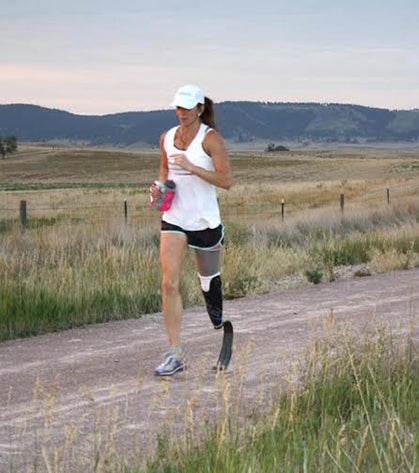 Photo by A Step Ahead Prosthetics, courtesy of Amy Palmiero-Winters.

In 1994, Palmiero-Winters was involved in a motorcycle accident that eventually cost her her left leg below the knee. A lifelong runner, she resumed competing with a prosthetic, completing several marathons in the 2000s and then moving up to ultramarathons.

In October 2009, with several below-knee amputee titles and records already to her name, she added an outright win, capturing the women’s crown at the Heartland 100 in Kansas in 18:54:13.

In 2010, Palmiero-Winters also became the first amputee to finish the Western States 100, completing the course in 27:43:10. 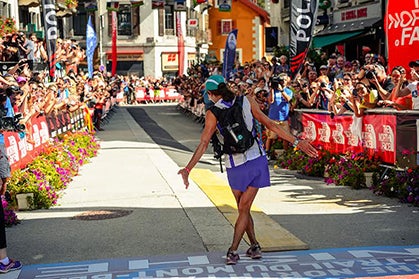 There is something about taking an early and commanding lead in a highly-competitive field, staying composed while well ahead of course-record pace, and ultimately crushing one of the hardest races in the world, that makes us think anything is possible.

6. Crushed by the Course 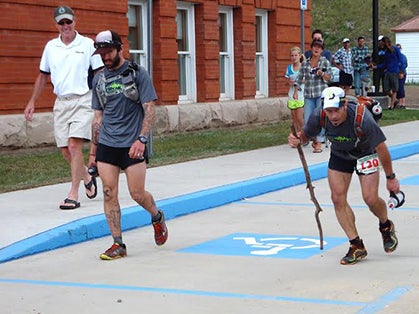 Hewey and his pacer on the home stretch of Colorado’s Hardrock 100 Endurance Run in 2013. Photo by Shelby Berg.

To see why Hardrock has so many spots on this list, one needs only to see what it did to Adam Hewey.

Hewey’s rise to ultrarunning prominence came at the finish of last year’s Hardrock race, where photos of him shuffling the last yards toward the finish hunched over, unable to straighten his back, quickly spread around the web. Hewey, running overnight, had run smack into a felled tree blocking the trail, which had in turn weakened his psoas muscles and gradually left them unable to stabilize his core and back.

“We started climbing and my body pitched forward like a puppet without a hand,” Hewey recounted on his blog. “I was having problems breathing because of my posture. We would stop, I would catch my breath, and we would continue to climb. Gradually over the next few hours, it was a rinse, wash, repeat cycle as my psoas muscles weakened and my body bent more and more.”

He would lurch the last 20 miles in a stance that earned him the nickname “the Hunchback of Hardrock,” meanwhile managing to finish 10th in under 30 hours (29:55:57). 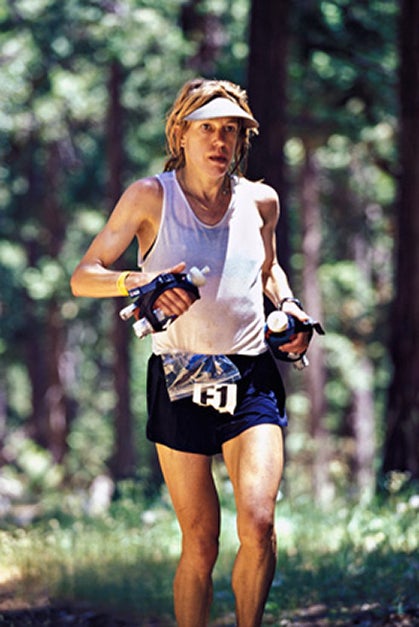 If you thought Hewey was dealt a tough hand physically, consider Ann Trason. In 1996, she won Western States—placing third overall, remarkable but for her second-place overall finish the year before—in under 19 hours, and followed it up by winning the 56-mile Comrades Marathon in South Africa less than two weeks later.

She did this with what doctors would later discover was a ruptured hamstring.

To win two major races totaling over 150 miles with an ailment that would instantly sideline most athletes puts her in her own category of toughness. Can we coin the term “Trasonhood” for those feats that defy reasonable and medically sound standards of pain? 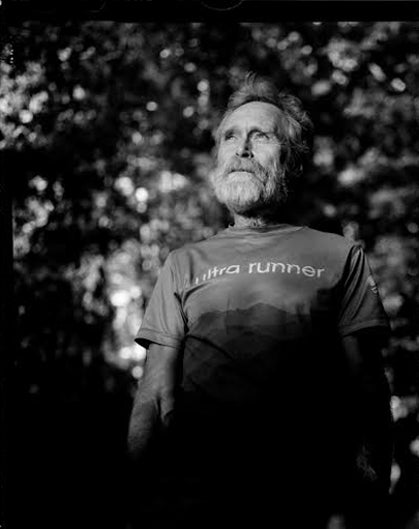 Where would we be without the founder of the trail 100-miler? When Ainsleigh covered the 100 miles of the Western States Trail Ride (then a horse race) on foot, he not only did what was previously considered unthinkable; he inspired thousands upon thousands of runners to follow in his footsteps and attempt the same feat. 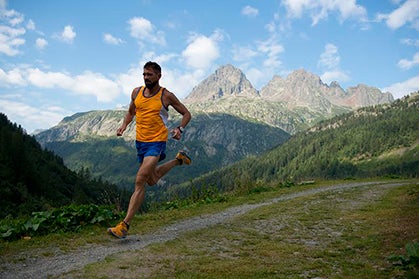 Koerner running in Chamonix. Photo by Tim Kemple, courtesy of The North Face.

Like Olson at Hardrock this year, Koerner had every reason to drop out of this race: he was an elite runner considered among the contenders for a win, but as the race unfolded it quickly became clear this was not his day.

Then, impossibly, it got worse: Koerner was struggling simply to move forward and was aggravating an old foot injury to boot. But he slogged ahead, and finished in 38 hours, 55 minutes and 39 seconds, good for 372nd place.

“I really thought Hal would drop at some point, especially after seeing him … at almost two thirds of the distance completed,” Ian Sharman, who was working on Koerner’s crew, wrote. “He’d been moving slowly and had to walk most of the section up to there, then could only really walk on any type of terrain after that.

“But it was inspiring to see him grind out a finish when it clearly wasn’t his day. That seems to be what the race is mainly about for almost everyone, but for someone aiming to be at the front, it takes a huge mental shift to just aim to finish, no matter how long it takes.” 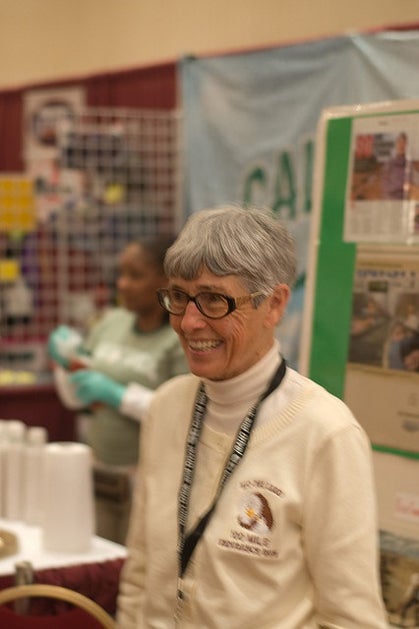 Klein in 2008. Photo by Andrew Solovay

Inactive until her 50s, Klein started running so she could join her husband in races instead of simply spectating. She would go on to run over 130 ultramarathons, including two wins at the Across the Years 48-hour race at the age of 65 and 66.

Klein reminds us that it is never too late to chase your goals down the trail. 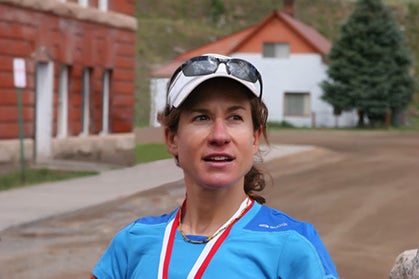 Finkel reveling in her 2010 Hardrock finish on the streets of Silverton. Photo by Ray Smith.

In 2010, Diana Finkel led the Hardrock 100—not just the women’s race, but overall—for 45 miles before being passed by eventual winner Jared Campbell late in the race. She would go on to finish second overall, earning first in the women’s race by nearly an hour and 45 minutes.

It came at a cost, though—she spent the next 16 days in the hospital with rhabdomyolysis, a breakdown of muscle tissue into the bloodstream that threatens kidney function. Her caution at subsequent races, sometimes dropping in the late stages due to warning signs despite holding a large lead, serves as its own inspiration to tackle our pursuits on the trail with the proper perspective.

But, that day in 2010, she was intimidated by neither the course nor the competition in a major race; she simply ran the way she knew she could. That is the closest thing we have to an explanation for why we pursue the running goals we do.

In a sport filled to the brim with suffering and the triumph of the human spirit, there are countless other examples—and one of our readers on Facebook may have summed it up best: in the words of Wayne Sylvester, “Pick any back-of-the-pack runner gutting it out alone to the finish, long after the winners and most everyone else have gone home. There’s your inspirational finish.”

What are some other ultra performances that inspire you?