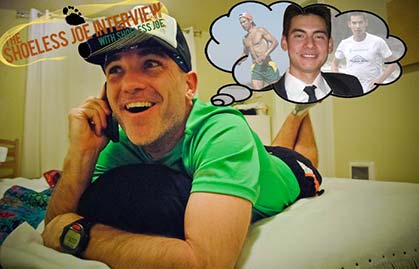 “There is the stereotype that if y­ou’re a runner, you’re the type of person who celebrates ALL forms of healthy living. I am not that type of person,” writes Seattle-based trail runner and comic artist Matt Inman—better known as The Oatmeal—in a web comic titled The Terrible and Wonderful Reasons Why I Run Long Distances. “They say you should treat your body like a temple. I treat mine like a fast-moving dumpster.”

Unlike Inman, some of us have a habit of taking our training—or ourselves—very, very seriously. This can turn a sport we initially sought out—presumably for some type of enjoyment—into a grind.

Need a reminder of the sillier aspects of trail running? Or maybe just a humorous little pick-me-up? Here are 10 runners with blogs or social-media channels worth following.

1. Sabrina Little, Not Allergic to Adventure

Some people are fast. Some people are funny. Twenty-four-hour and 200K American record holder Sabrina Little (formerly Sabrina Moran) of Waco, Texas, is both; after podium-finishing most every race she enters, she frequently posts comical race reports on her blog.

In a recap of the Grasslands 50-miler, she recalls getting lost the first year she ran it (before going on to finish ahead of not only all the women, but also all the men): “At one point, I stood alone in a field of cows, crying, ‘Is anybody out there?’ The answer was no. I found my way back onto the course, where more cows were standing in front of the cow gate I needed to enter. I had to sweet talk them into letting me through: ‘I love cows. I’m lactose-intolerant. Let me in.’”

If her blog isn’t enough, you can find her on Twitter, too, with gems like this one: “Completed a hard 16-mile tempo workout this morning, then DNFed an ice cream cone this afternoon. The struggle is real.”

You have to dig a ways into the Seattle Running Club’s blog archives to uncover the nuggets that comprise “Shoeless Joe” Creighton’s interview series—but his wildly irreverent Q&As are worth the read. Primarily focused on Pacific Northwest trail runners like Jodee Adams-Moore and Uli Steidl, Shoeless Joe peppers his interviews with ridiculous questions (“Was your high school cross country team a meat market like mine?”, “Are there any ultrarunners in Colorado?” or the recurring “Dirty Dancing or Pretty Woman?”) and photos of his interview subjects being put off by his obnoxious commentary and Vibram-clad feet.

All eight of the interviews are fantastic, but if you need one to start with, Shoeless Joe’s 2012 phone interview with Sage Canaday comes highly recommended.

Or, dig in with this video of a “speed round” of questions with Justin Houck. Don’t miss the video credits and disclaimer at the end: 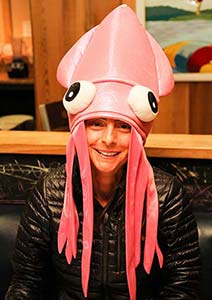 If you’ve ever felt irritated by the gratuitously scenic mountain photos or boastful social-media posts of trail runners who appear to have no jobs or families or obligations of any kind, you will appreciate the candor of national trail-running champion and running coach Liza Howard’s deadpan-funny blog that she began in 2010.

Her posts include frequently hilarious recaps of races, everyday training runs in Texas (infused with honesty: “To all you people posting about how good you felt on your runs today … I felt like crap”), or adventures in motherhood.

From her Marathon des Sables stage-race report: “There was a pale flabby fellow who walked by my tent every day wearing small maroon underwear, white slippers, and two square pieces of shiny tape over his nipples. That’s it. I came to look forward to seeing him go by. I can’t say why exactly. It was reassuring somehow. ‘See, everything’s fine. Maroon-underwear guy is still here worried about nipple rash. We’re all going to get through this.’”

Other recommended posts: Social Norming for Ultrarunners and Playgrounds and Non-Linear Success. 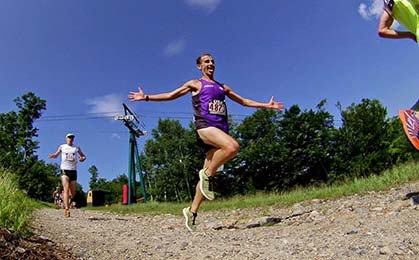 In our December 2014 issue, we profiled trail-running power couple Megan (formerly Deakins) and David Roche. The super-fast pair described their first date—after cancelling on each other “five times or so”—as a long evening at a frozen-yogurt place. Since then, they’ve gotten married, spent their honeymoon in Italy racing at the World Mountain Running Championships, smashed multiple course records all over the country, devoted an Instagram account to their dog (@addiedoesstuff) and picked up a few lucrative sponsorships including Nike and, appropriately enough, frozen-yogurt company Arctic Zero.

David, who runs a coaching service called Some Work, All Play, keeps up an active blog about the couple’s running exploits. In one post, he recounts a 5K he and Megan ran together on New Year’s Eve just a few months into their relationship—before either of them were serious runners. They donned evening wear, had a few drinks, and come the race start at midnight, David recalls, “I leaned over for the obligatory New Year’s kiss. I put my hand on the back of her sparkling dress, and my lips slowly began the descent to her face. She didn’t even move her head. She just grunted disapproval and took off like a bat out of hell as the start gun fired.”

Both Roches also tweet, often about running-related experiences out on the trails or at home. A recent post from Megan: “Me, ‘Why are there running clothes in the sink?’ [David], ‘I’m washing them.’ Me, ‘We have a washer!’ David, ‘Most people do this.’” 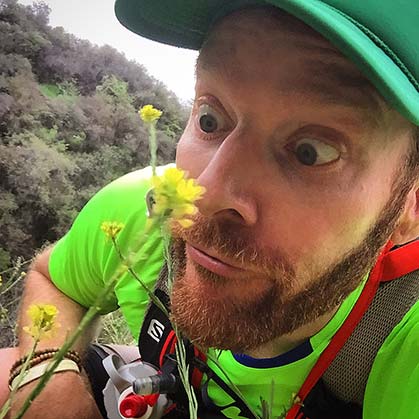 An actor and improv comedian out of Los Angeles, Ethan Newberry produces light-hearted YouTube videos that do everything from review trail-running gear to preview race courses to interview prominent figures in the trail-running community. On the welcome video on his YouTube channel, Ethan says, “Let me start off by saying, I am not a professional athlete. I’m not a professional runner. Nor are you. Unless you are—in which case, yay! This site is by runners, for runners—but with a twist. We’re f***ing fun!” 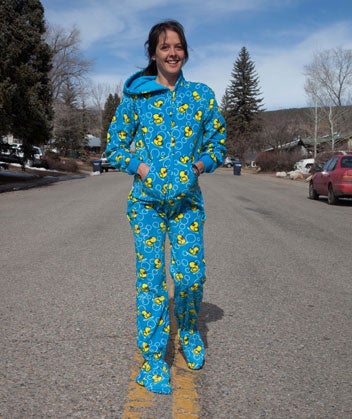 In addition to frequently contributing to Trail Runner’s Last Gasp column, Jenn Shelton—ultrarunner, 100-mile champion and trail-running ambassador—maintains an active following on her Twitter page @SheltonJenn. Almost always punctuated with witty makeshift hasthtags, her tweets range from random musings (“Another day with this cough and Ima have abs like a Ken doll #freetraining”), to retweets of adventures shared with Lance Armstrong, to photos of herself vomiting on a track (“#trackpictuesday”), to quips not even close to appropriate for quoting in this article.

A series of tweets from February: “Anyone with AAA. Meet me downtown and I’ll buy you dinner. #lockedmykeysinside #again. The po won’t help unless there’s a child locked in there too. I told them my skis are my children but they weren’t amused.” 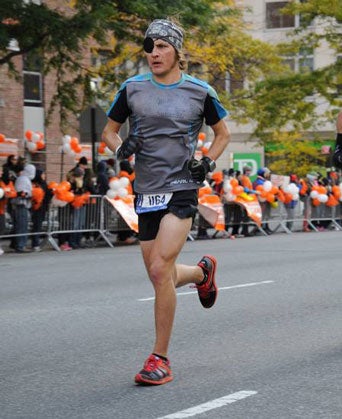 “In exactly one week I will board an airplane (for my fellow Durango Luddites: a steel tube with wings) which will whisk me away to a very unfamiliar world where mustachioed people in lederhosen and tilted caps drive tiny cars on the wrong side of the road,” wrote Colorado trail runner Brendan Trimboli on his blog before the 2013 Ultra-Trail du Mont-Blanc. His Euro-American comparisons continued once he landed in Europe: “You know how beards are a really big deal back in the States? (I’m looking at you, Rob Krar.) Well, wear one here and you might as well paint, ‘Hey everyone! I’m a freaking American!!’ across your back in red, white and blue. It’s times like these when perhaps my inability to grow facial hair isn’t such a bad thing.”

In addition to amusing race reports, Brendan also shares stunning photos and occasionally heartfelt posts like this tribute to his roommate and fellow Durango runner, Paul Hamilton: “At San Juan Solstice he charged off the line in a striped, cotton tank top that he may have scavenged from a thrift shop floor for all I know, his hat reversed and blond locks flapping in the breeze. He gets after it without overthinking it, a ‘simpler-is-better’ approach that I (and perhaps many of us) could benefit from.”

An Irishman now residing in Tottenham, England, Matt the Angry Jogger introduces himself on his blog as someone who “used to be fat and miserable and now I’m just miserable (sometimes).” In addition to documenting his 70-pound weight-loss journey—often with searing honesty about ongoing frustrations and setbacks—Matt also frequently blogs about the sillier aspects of running culture.

Begun in late 2011, his running blog is a deep well of angsty but funny, self-deprecating, swear-word-laden content—including posts such as 24 Awkward Moments That We All Share As Runners, How Tripping On Magic Mushrooms Is Actually Quite Similar Emotionally To Running A Marathon and My Alli Diet Pill Horror Story—When My Bowels Failed Me After 4 Pints of Guinness.

Stephanie Case is an ultrarunner, freelance writer, human-rights lawyer and founder of the nonprofit Free to Run, which provides opportunities for women and girls to get involved in sports in conflict-afflicted communities like Afghanistan and South Sudan. She’s also very funny.

Though her line of work is a serious one, her blog—Ultra Runner Girl: Running (tripping and falling) my way through life!—is just as entertaining as it is inspirational, educational and thought-provoking. While living in South Sudan, she wrote, “Most of the time when I go out on my runs, I get a positive reaction. The kids practically trip over themselves to come join me when they see me coming down the path, often fighting and pushing each other just to grab my hand (I haven’t figured out how to calm them down!). I really have never seen such [a] level of exuberance before—consistently and repeatedly—from kids of any country. I think you’d have to tell a child from North America that they had just inherited 500 puppies, 1000 PlayStations and Spiderman as a permanent playmate in order to elicit the same reaction. It is truly infectious (the only infection I’m not trying to avoid here).”

A few particularly humorous posts of note: Top Five Most Awkward Massages, When It Rains, It Poo-rs: Training with Dysentery, and 20 Similarities Between Aid Workers and Long-Distance Runners, which includes observations like, “We both have strong quad muscles. Ultrarunners and aid workers have to spend a lot of time squatting in latrines or out in the bush. If you don’t start off with good quads, you’ll develop them quickly.”

Seattle web-designer-turned-cartoonist Matthew Inman launched his website, The Oatmeal, in 2009 to publish comics and quizzes related to everything from cats to dogs to zombies to English grammar. In 2011, he ran his first 50-mile trail race. Two years later, he coined the term “the Blerch,” began directing races and released a full-length comic book, The Terrible and Wonderful Reasons Why I Run Long Distances.

Though Inman’s website is not exclusively devoted to running, it’s a topic that crops up regularly in his comics. Other suggested reading: Trail Runners vs. Mountain Goats, I Ran My First 50 Mile Ultra Marathon Last Week and The Dos and Do Nots of Running Your First Marathon, which defines a marathon as such: “A popular form of overpriced torture wherein participants wake up at ass-o-clock in the morning and stand in the freezing cold until it’s time to run, at which point they miserably trot for a god-awful interval of time that could be better spent sleeping in and/or consuming large quantities of beer and cupcakes.”

Bonus: This “What is Ultra” Tumblr blog appears to have gone defunct last August, but it’s still a treasure trove of hysterical trail- and ultrarunning memes. Thanks, in particular, for this shoutout to Trail Runner.

Who’d we miss? Let us know in the comments who your favorite running bloggers are!