Thinking of a career change? Here are 10 ways to support your trail lifestyle and (hopefully) still pay your bills

Scheduling an hour out of your day for a run can be difficult when your job isn’t flexible. Trying to squeeze in runs during your lunch hour can be hectic, not to mention sweaty—and leaving your training run until the end of a long day at the office may turn into skipping it altogether.

Not all jobs are at odds with the trail-running lifestyle, though. We recently spoke with 10 avid runners whose jobs help sustain their passion for being on the trails. 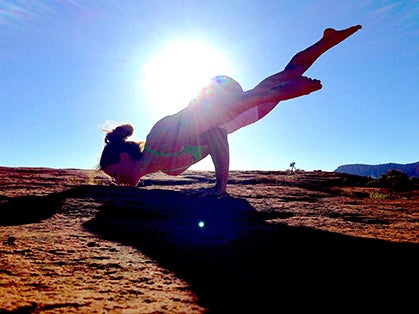 Perks: For the most part, Cieslewicz is able to design her own schedule. She adds that teaching her students serves as reminder to practice yoga on a regular basic, as well.

“I currently teach yoga in early hours and the evenings.  This opens up time in the day for runs anywhere from 45 minutes to two hours, five days a week,” explains Cieslewicz.

Requires: Yoga Teacher Training Certification, generally an intensive 200- or 500-hour training and teaching program over the course of a few months. Cieslewicz also has a degree in Exercise Sport Science from the University of Utah. 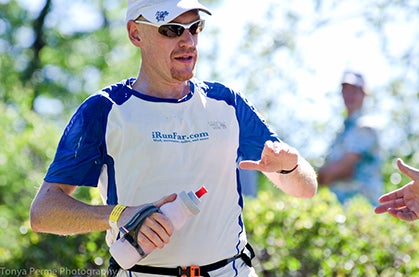 Says Powell, “I have more running gear in every make and model than I could use in 10 lifetimes.” He also cites being able to live anywhere in the world as a huge bonus, as well as often running whenever he chooses. “I’m no morning person,” he says, “and I love timing my run so that it ends around sunset.”

Requires: Anyone can start a blog. But, says Powell, “A willingness to tackle any and all issues is a prerequisite for running a media website.”

Powell also says that his work can sometimes be a detractor from, rather than a complement to, trail running. “I go without sleep for sometimes days in crappy conditions if necessary, and unless I have a single race that I really want to train for, my work takes priority.” This means he’s running 25-30 miles per week during his “off season” when he’s working plus 14-hour days, seven days a week. “No joke,” he says. 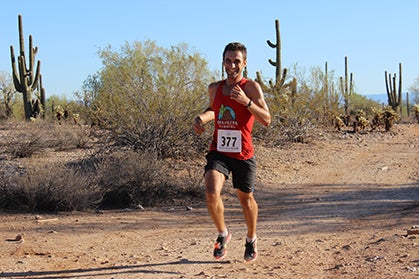 Perks: “All the Gatorade and M&Ms you can eat?” jokes Coury. In truth, he suggests that the best parts are the days he explores new trails for future races as well as the time spent with the runners at his races. “The occasional piece of free gear or race entry is nice, too,” he adds.

Requires: “It doesn’t require any formal degrees (though I have three), but I use just about every skill in the book,” says Coury. “I do everything from event management to graphic design, marketing, web development, physical labor, human relations, computer programming, and just about anything else you can imagine.” 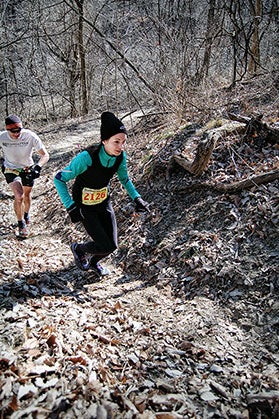 Perks: “Perks include having a set schedule,” says Lickteig, “for a total of 40 hours.” She also explains that having co-workers that are supportive of her running means that she can often have her shifts covered when traveling for races. “My job complements trail running because I’m able to diagnose myself when I feel like I have an injury coming on, or whether I can run or need to cross train instead.”

Requires: Masters or Doctorate degree from an accredited college specific for physical therapy. Lickteig adds, “You need to be flexible and have good communication and interpersonal skills.” 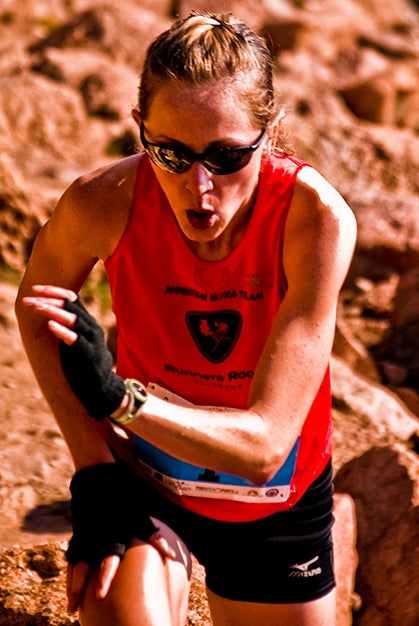 Perks: Says Dobson, “Having two months off each summer allows for more training, more time in the mountains and proper recovery.” She also adds that simply being around the kids is energizing, and she’s constantly moving around rather than sitting behind a desk. “Their passion for life and physical activity is infectious.” 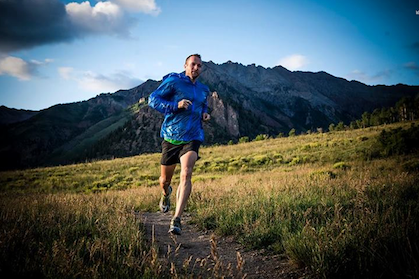 Perks: “The biggest is sharing in people’s successes,” says Hart. The work, he explains, is tangibly rewarding because when an athlete accomplishes more than he or she ever dreamed possible, it’s amazing. Location independence and work-hour flexibility are close seconds for best perks.

“Sometimes clients will fly me out to their races, or to their local area for mini trail-running camps.” Simply put, he says, “I go run when I want.”

Requires: “Run coaching is still the Wild West,” says Hart. “If you are fast runner you can say, ‘I’m a coach!’ and people will line up.” Many coaches have running coach certifications and degrees in health and fitness-related fields. Being an accomplished competitor with a few race podium finishes doesn’t hurt either. 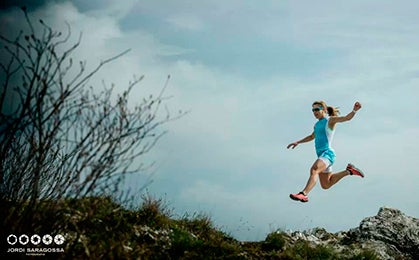 Perks: Scallon finds her job flexibility and schedule to be a major perk. “I don’t usually run on days I work, since they’re 12-hour-plus shifts, but it works out because I don’t run every day,” says Scallon. “The schedule has been great, and I feel that the selflessness that nursing requires really balances out the selfishness of running.”

Requires: At least a two-year program, but there’s a trend toward also needing a bachelor’s degree and certificates for specializations. Says Scallon, “Nursing also requires common sense, empathy and a strong desire to care for people.” 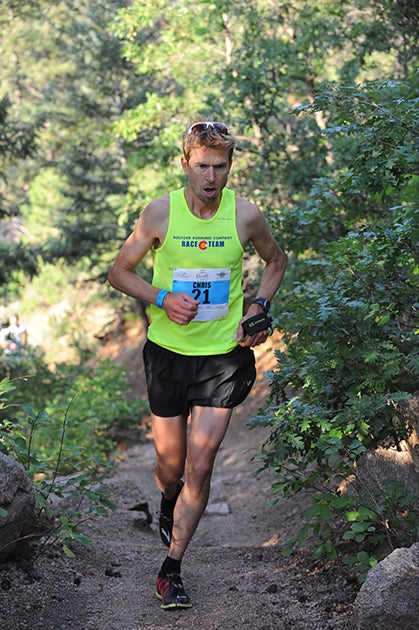 Perks: “I think being an athlete makes you a better therapist,” says Grauch. “You understand firsthand what parts of the body are sore and why.” He cites perks like flexible hours for the self-employed and clients who are usually happy to see him, and adds, “For more introverted types like me, I can spend hours of the day in a low-stress and quiet environment.”

Requires: Job requirements vary from state to state, but most employers require a certain number of hours from an accredited school. Grauch suggests getting as many hours as possible. If you plan on being self-employed, a business license is necessary. 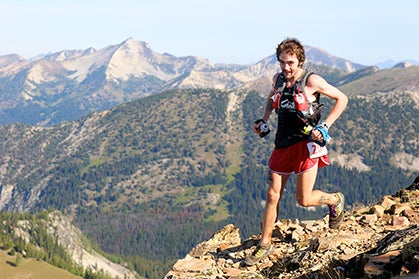 Perks: Getting to be immersed in the local running community and culture all day long. “Entries into races around the region are [another] perk,” says Barry. The biggest perk, however, are the shoes. “How can I sell a shoe if I haven’t run in it and don’t know what it’s like? So I ask for free shoes a lot.” 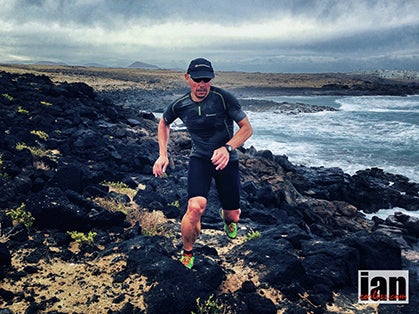 Title: Podcast Host at Talk Ultra, in addition to Photographer and Running Coach

Perks: “Without a doubt, travel,” says Corless. “I can do three to five trips per month and depending on the assignment, they can be in wild and remote places or sometimes close to home.” He also feels fortunate to spend time with elite trail runners either, running together on the trails or hanging out in hotels. “I feel very blessed.”

Requires: “Podcasting is self-taught and my passion and love for running is something that has grown organically,” says Corless. He suggests that having full knowledge about the races, the year’s calendar of races and background information on the elites as all very necessary to producing a successful podcast. “Communication skills are imperative and, most importantly, you need to survive on as little sleep as possible. This job is a lifestyle,” he says.