There is no art to running in the rain 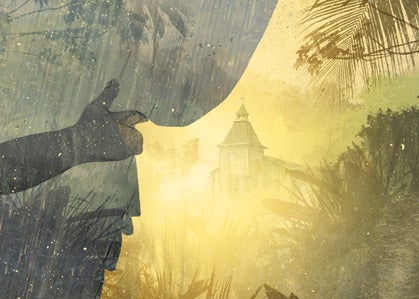 An autumn getaway to equatorial Costa Rica sounded like the perfect last hurrah—a final chance to run in shorts before the northern latitudes surrender to raw days, fogged glasses and air hankies. Never mind that October is the “green season”—a transparent tourism-office spin on “rainy season”—in Central America. We were told that the sun would sneak through for a part of every day.

Cue Perfect Storm music. As our airplane bore down on this small country, low-pressure systems settled on both the Pacific and Caribbean coasts. Then Mother Nature went for the trifecta and spun a hurricane to the north. This weather sandwich delivered more rain in seven days than I had seen all year in Colorado.

Nicaragua and El Salvador declared states of emergency. I declared a state of depression.
For the first few days, I created excuses to leave the trail shoes in the suitcase. “I’m on vacation, it’s 5 o’clock somewhere, and give me a rum drink.”

Finally, on the third afternoon, as I watched water fill a half-coconut shell in our casita’s yard, I cracked. I needed a run like a Toucan craves Fruit Loops. Putting down my 10th cup of coffee, I decided, “If Portlanders can deal with these conditions for half the year, I can for a week.”

I slipped on my shoes and headed up a muddy road lined with impenetrable jungle on both sides. Two stray dogs appeared from beyond a barbed-wire fence and gave chase. As my pace picked up, so did the driving rain. I hopped over pothole puddles, and at creek crossings kept a wary eye out for crocodiles. I called it good after four sloppy miles.

The next day I ditched the rainy jungle run in favor of a rainy beach one. I wondered if I might appreciate the virtues of barefoot running, and the wild-eyed enthusiasm of Vibram Five Fingers zealots. “Dude, it will change your life,” one Bay Area runner had told me.

Running along the surf, I found the mystical line between sand that is too hard and too soft. I also discovered that swim trunks are not designed for men who run. Denim would have chafed less. Sand fleas nibbled at my ankles and would leave me scratching for days.

These runs were leading to more misery than bliss.

Running and vacation go hand in hand for me. On holidays I’m less of a slave to responsibilities than normal, and have the liberty to stretch five-milers into 10-milers. Sometimes I’ll go out twice a day.

A day or two later, I returned to the jungle, though the skies had grown even gloomier as the vacation continued. I put on my still-dripping shoes. Would it be out of the question to put coffee in a handheld water bottle?

The sound of my strides up the unpaved road alternated between muddy slaps and splashes. A farm of some kind–sugar cane?—appeared on a ridge. I settled into a rhythm. The rain, naturally, continued.
At a hilltop, miles into the jungle, I came across a small settlement. Chickens scattered from the road.

In the heart of these homes and their holey thatched roofs stood a two-story church painted a brilliant turquoise. Amidst all the dripping dreariness, it practically gave off light. As I stood there, literally soaking it all in, I heard the soft, peaceful singing of a woman on a nearby porch.

For the first time during this vacation, I smiled during a run. I headed back, glancing again at the radiant church. Maybe that’s how trail runners in the Pacific Northwest come to love this weather: they recognize the magical snapshots between the raindrops.

Garett Graubins can see clearly now. The rain is gone.

The Best Women’s Road and Gravel Apparel of 2022