What it takes to host an unsanctioned trail race 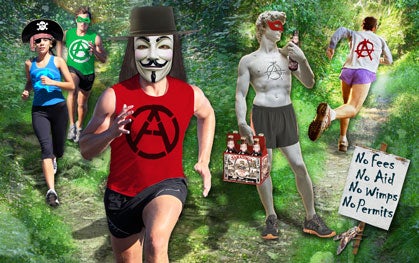 A chunk of discontents look at today’s race fees with disgust. $25 for a 5K? A $300 marathon? I get it: insurance, course markings and, for all that’s holy, GU. But the spirit of racing has been thrust to the margin, pricing folks like me away. Now what? Do what I did: host your own.

I had two days.

Friday the 13th, I scrambled. I wondered if I should use Pearl Izumi’s site for my race because they harbor the same spirit: “Running. What was once a bona fide sport now more closely resembles a corporate-sponsored exercise class.”

Pearl Izumi’s Cassie King said, “At Pearl, we’re big supporters of real runners and racing. With the growth of 5Ks and Turkey Trots a lot of people are frustrated. Some people want to avoid race fees and get back to what racing is about and that’s racing.”

Even Strava.com hopped aboard. Using their GPS-driven training tracking software, you post times to leader boards thus enabling users to “race.” They largely accommodate cyclists, but have since recruited runners.

While both apps look inviting, I chose to do it alone, much like Neal Beidleman did in 1984 when he started the Basic Boulder Mountain Marathon in Boulder, Colorado. It didn’t take long before a couple dozen runners blew up to a couple hundred.

This rebellion embeds itself into the fabric of the trails. “Fact is, trail running is an extension of free will,” said Beidleman. “It’s anti-establishment, you and the trail. The nature of unsanctioned racing is in line with the spirit of trail running.”

I live near a gnarly trail network in Saratoga Springs, New York. The rocks and roots would challenge Lolo Jones.

I leaned on the runners I knew from the local specialty running shops. I texted, I called and I created a Facebook event. I received a “Mmmaybe,” which meant no, and then Ken Little replied. … Ken looks like Michelangelo’s David in split shorts and hungers for competition (he once challenged me to see how fast we could screw spikes into a pair of Nike Victories).

I contacted Alex Paley, a string bean who wins road races all over the Capital Region. He shared the race on Facebook.

I messaged Renee Tolan, a zipster who promised to bring company.

In 24 hours, nine committed. Now to map a course.

I walked the trails and GPSed 2.9 miles. I hoped the turns would be obvious and that my runners would get to run an honest race. But the course turned back on itself and if not marked well enough, they’d miss a turn. The uphills pushed back and the downhills grinded you to a nub. The strawberry flies were more bloodthirsty than Dracula. Perfect.

So, at 5 a.m., three hours before the “gun,” I crafted signs and tacked them up, the last at a confusing crossroad they would encounter twice. I’d have to tell them to ignore the sign the first time, to turn left instead of right.

They gathered around me, I showed them the map of the course and explained the confusing fork.

Twenty-two feet bolted, a cacophony blitzing over root and rock.

Ken led with Alex close behind. Ken handled the descents with a fearlessness Alex lacked, yet they remained tightly packed.

I waited at the start/finish line and saw Ken and Alex coming by for the first time … from the wrong direction. They missed the turn I feared. “Serious?” Ken asked.

“Go, back, take a left where you took a right, about a quarter-mile back,” I said. They jetted. Three minutes later the rest of the pack came by for the first time … from the wrong direction.

They laughed. “The good news is everyone made the same wrong turn,” I said.

Soon I saw Ken from the correct trail. He muscled for the final loop. Alex trotted, 15 seconds behind Ken, bludgeoned by the trail. They had just about two-thirds of a mile left.

Then, shockingly, Alex came charging up to the finish, “Where’s Ken?”

Alex collapsed on the ground 10 yards shy of the finish. Two minutes later Ken charged up. “What are you doing? Ken asked.

The rest of the field finished together, Renee leading the pack.

“My group ran 3.6 miles!” Renee said. “We decided to stay together. ‘Which way do you want to turn?’ It was turn by committee!”

I awarded the winners six packs. They jawed about the race, smiling. It cost them nothing. Just time. But they are runners and that’s what they do. Runners run.

“It really is about the roots and spirit of running,” Beidleman told me. “There’s something very pure about that notion, not too commercial, not too organized, not too thought about, just go out and charge it and have a good time. Then it disappears, like a wave in the ocean.”

Brendan O’Meara is the author of Six Weeks in Saratoga: How Three-Year-Old Filly Rachel Alexandra Beat the Boys and Became Horse of the Year. Follow him on Twitter @BrendanOMeara.