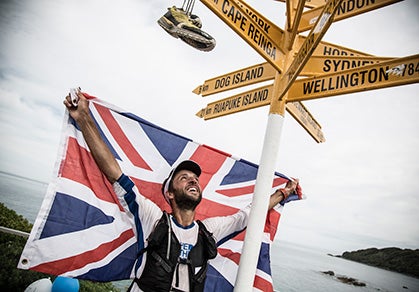 Jez Bragg doesn’t have to run today. That may not sound like breaking news, but after 53 days of near-constant running, it is a big deal to Bragg. In an interview with Talk Ultra Podcast’s Ian Corless, Bragg said, “I think it’ll take a week to snap out of the mindset, and actually feel remotely normal.”

At 4 p.m. on February 2, Bragg, 31, of Dorset, England, completed his human-powered crossing of the North and South Islands of New Zealand. Supported by a small crew of family and friends, Bragg set a new FKT (fastest-known time) of 53 days 9 hours 1 minute, becoming the second person to run the Te Araroa Trail, a 3054-kilometer (1900 miles) route from Cape Reinga at the northern tip of the country to Bluff in the south. Less than a week before Bragg headed out, Richard Bowles, 34, a Brit living in Australia, made the first crossing of the trail, in 62 days, finishing on December 17, 2012.

Though celebrations were cut short by swarming sand flies, Bragg described the moment on Talk Ultra as “huge emotion, pride and passion…[the culmination of] so much energy, determination and mental focus. [Considering] everything that had gone into the previous 53 days, it was the best moment that I can ever imagine in my life.”

Bragg’s epic journey was not without roadblocks—unexpected trail detours, severely technical terrain, unpredictable weather and a temporarily crippling case of giardia. In his Talk Ultra interview, he described the terrain as “harder than I ever imagined. It’s a route; it’s not a trail … There’s nothing there. It’s an adventure route, because of all the river crossings, the kayaking sections, the route finding, the wilderness skills required. It’s not really a runner’s route, it’s an adventurer’s route.”

Among other kayaking sections, Bragg crossed the 44-kilometer Cook Strait, which he considered one of the expedition’s highlights. Accompanied by his father-in-law, Mark Taylor, and expert New Zealand kayaker and guide Tim Taylor, he told Corless “Adrenaline carried me across … I just focused on paddling against the crazy currents,” adding, “I mean, I’m a runner with a scrawny upper body!”

Originally hoping to complete his journey in 50 days, Bragg was laid up with a case of giardia that shook his confidence. “To go from running intensely for 14 to 18 hours a day to being horizontal for 72 hours was just bizarre. It made me feel so weak and so low, just helpless really.”

When he was finally able to stand again, he made it a mere four kilometers, with the help of two walking sticks, before collapsing. On Talk Ultra, Bragg said, “What kept me going at that point was that what I’d done up to that point was just golden … It was just too good a foundation to throw away.”

Looking gaunt and thin at the end of the expedition, Bragg ended his interview saying, “I know it will [make me a different person]. It stripped away daily life on the outside and revealed my core emotions. [Something like this] illustrates what is important to you in life. It has just sort of cleansed me.”