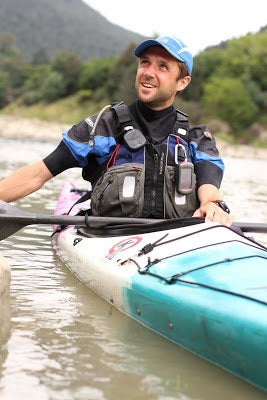 “I didn’t choose the colors…” Bragg joked, of his kayak.
Photo by James Ashwell

Jez Bragg, 31, of Dorset, England, has been dreaming about the Te Araroa (The Long Pathway) trail since long before it even existed. “For me, ultrarunning is all about this type of adventure; the opportunity to explore remote and challenging landscapes in a very raw and pure way. There is no better way to explore a country like New Zealand with such outstanding natural beauty than to do it by foot,” he says. The 1898-mile trail, or “track” as New Zealanders call it, has been in the works for a decade, and stretches from Cape Reinga at the top of the North Island to Bluff at the tip of the South Island. The distance is equivalent to running from Rome to Moscow, off road. Governor-General Sir Jerry Mateparae officially opened the New-Zealand long trail on December 3, 2011.

On December 12, 2012, Bragg embarked on a human-powered solo (crew supported) attempt to run the full Te Araroa Trail. Bragg bikes between stopping points and campsites when necessary and kayaks where ferry travel is recommended. Now, 27 days into the challenge, Bragg has successfully run the entire North Island section, crossed the treacherous 17-mile Cook Strait by kayak and set out on the South Island.

An accomplished ultrarunner, Bragg has podiumed at California’s Western States 100-Mile Endurance Run (2009), and in 2010 won the Ultra-Trail du Mont-Blanc, a 101-mile race around Europe’s tallest mountain. He also set course records in The Highland Fling Ultramarathon, a 53-mile trail race in Scotland (2009) and The Fellsman, a 61 mile trail race in the UK (2011).

Unlike these races, though, his through-run across Aotearoa, the Maori word for New Zealand meaning The Long White Cloud, offers no external competition and no prize at the finish line. Bragg told the UK news publication The Independent that he is running “for the purity of the sport.” He says multi-day routes and “journeys in the mountains” are his favorite part of ultrarunning; “To be solo, on foot, creates a wonderful sense of freedom in a world where day-to-day life is increasingly frantic.” 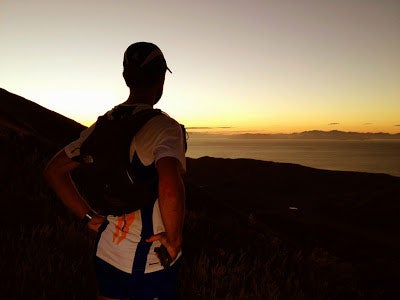 Sunset overlooking the Cook Strait and the South Island.
Photo by James Ashwell

So far, Bragg has tallied 1071 miles, logging an average of 40 miles a day. He is supported by a crew of two, medic Dr. Mark Taylor (Bragg’s newly acquired father-in-law) and expedition coordinator James Ashwell, who drive a support motor home that meets him several times a day when possible and provides a bed and a hot-cooked meal on most nights. Bragg runs with a day pack stocked with a rain jacket, a base layer, a GPS, maps and a compass, a Steri Pen, drink powders and snacks, an iPhone with a tracking device, a headlamp and several other small safety items. He hopes to finish the run in 50 days, and is currently on track to do so. Bragg and his crew keep an almost-daily blog updating his progress.