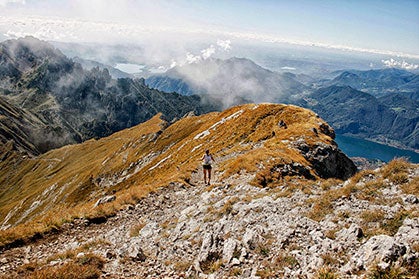 On September 16 I found myself in Pasturo, Italy, at the starting line of my third-ever marathon. Barricades decorated in advertisements lined the road, while throngs of spectators cheered on all sides. From tall speakers came a driving beat and a stream of Italian that meant nothing to my uncultured ears.

I was about to embark on possibly the hardest and most technical marathon in the world—the Sentiero delle Grigne. Also known as Trofeo Scaccabarozzi—or “Scaccabarozzi Trophy”—the race was established in memory of Giacomo Scaccabarozzi, a renowned Italian mountaineer who died in a paragliding accident in the Grigne Mountains in 1998.

A skyrunning race of the highest caliber, Grigne links the two major peaks of the Grigne Mountains, taking its runners across 43 kilometers with 10,500 feet of climbing. In certain sections, the trail is so steep and rough that a fall could be fatal. The course record of 4:43:58 has stood since 2007, set by then-19-year-old Kilian Jornet in his first major international victory.

Standing in the crowd of about 200 runners jabbering in Italian, I felt somewhat sheepish. I’d only arrived the day before and had no idea what to expect—but the feeling didn’t last long. Soon enough, everyone shuffled forward and within 30 seconds, the race began.

With no qualms about being competitive, Europeans take an aggressive approach to mountain races—by which I mean they actually “race.” At every race, easily 20 or 30 runners will crush them- selves trying to win. Races en- courage this sometimes-reckless intensity by offering top runners prize money, accommodations, meals and even appearance fees.

The race began on rolling, runnable terrain, weaving through forests and meadows. After 15 kilometers, the trail rose steeply toward the first peak on a sweeping ridge of arching stone, forcing me into a hard hike.

As I approached the top of the first cloud- covered peak, I pulled myself up on chains bolted into the rock. To keep moving up the sheer rock faces, I grasped the terrain with both hands, Batman-style.

The first descent was no less terrifying. The course seemed suspended in space, a gray void dropping off the sides of a narrow stone ridge. Strong-armed alpine guides stood in the most extreme sections to prevent runners from falling—though at the breakneck speed I was going, their touch would only have thrown me off balance.

Several hundred vertical feet later, the course began to resemble a trail again. Says Scotland’s Tom Owens, who won Grigne in 2011, “I felt an overwhelming sense of relief upon finding myself safe and running on reasonable terrain once more. It was almost a surprise to realize my life wasn’t in danger anymore.”

These moments of security were few and far between. At times, the singletrack narrowed to the width of my shoe. I watched my footing closely, but couldn’t help stealing glances at the brilliant Lake Como below. At its shores, the town of Lecco glittered in the sunlight.

Another section had us climbing lad- der steps drilled into the rock. Exhausted, I resigned myself to a slow march up to the second peak and highest point of the course, at more than 8000 feet. Clouds hung low all around me.

At the summit, I was buoyed by the raucous cheers of spectators—diehard fans who had hiked up five or six treacherous miles in the cold wind, just to cheer the runners. I grabbed a Coke and chocolate croissant at the aid station and began the descent.

With reckless abandon, I let gravity take hold and hoped my legs could keep up. The valley below was dappled with tiny houses, pastures and winding paths—but it was no time for scenery gazing.

I passed several people along the five-mile descent back into Pasturo. Even in town, the course remained technical, through winding streets and down staircases. Soon, my ears were again met by deafening crowds and the same Italian voice booming from the speakers.

I had just suffered through one of the world’s most difficult marathons with people I had never met and could barely communicate with. But when I crossed the finish line—my third marathon, in a personal record of 5:06—I felt among friends.