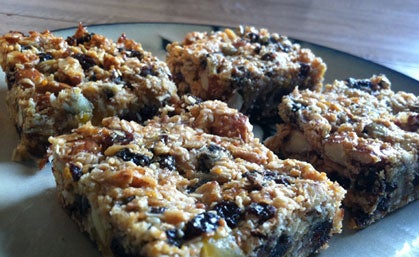 In “For the Hell of It” (a tale of running across Death Valley, California, Trail Runner, March 2013, Issue 86), the author, Colby Frazier, mentioned the apparently delectable homemade Helen Bars, and several readers have clamored for the recipe.

So … Helen McMahan of Springdale, Utah, kindly provided the following information and recipe.

“A friend of mine gave me this recipe in 1992,” says Helen. “I’ve made this dozens of times over the years and always keep some ready to go in the freezer. I tend to vary the dried-fruit mixture, depending on my whim and what’s available. Nearly everyone who samples the bars insists on having the recipe.”

Spread oats in 10” x 15” baking pan. Bake at 300 degrees for about 25 minutes (until toasted). During the last 10 minutes of baking the oatmeal, place sesame seeds in a frying pan and cook over medium heat until seeds are golden (about 7 minutes), shaking frequently to prevent scorching. Combine the oatmeal and sesame seeds into a large bowl. Turn off the oven. Add the butter to the hot oatmeal pan and allow it to melt in the oven.

In the frying pan, combine corn syrup and sugar. Bring to a rolling boil over medium-high heat, stirring constantly. Remove from heat and quickly stir in the peanut butter, orange extract and orange peel. At once pour over the oatmeal-fruit-grain-coconut-nut mixture and stir very well. Mixture will be thick and sticky and will require a lot of muscle to stir. Quickly spread into the buttered pan and press into an even layer, using a spatula or parchment paper to prevent burns. Cover and chill until firm or keep at room temperature until firm (at least 4 hours).

Cut into bars about a ¼” x 2 1⁄2″. I suggest a pizza wheel to slice through the bars because they are very dense. Wrap individually in plastic wrap or place in Ziploc bags. These freeze well.

The 3 Best Ways for Vegan Runners to Maximize Recovery

Recipes to Rock Your Recovery This Winter