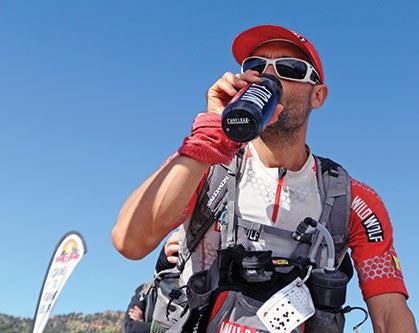 Courtesy of Grand to Grand Ultra

There are a dizzying array of drinks and powders on the market that promise to keep you hydrated and boost energy levels during your runs. But you need more than just water and sugary calories for optimal performance.

Every bead of sweat that drips from your face contains a mixture of electrolytes—in layman’s terms, “positively or negatively charged ions that conduct electrical activity,” says Jonathan Toker, Ph.D., an organic chemist and elite trail runner who founded the hydration-products company SaltStick. “They are necessary to help maintain proper fluid balance, [and] perform functions involved in muscle contraction and relaxation.”

When electrolyte levels drop too low, performance can suffer. Signs of this include muscular fatigue leading to the dreaded “bonk,” cramping, poor thermoregulation that makes heat less tolerable and feelings of disorientation. In extreme cases, consuming a large volume of water without sufficient electrolytes can lead to dangerously low levels of sodium in the blood, a potentially life-threatening condition known as hyponatremia.

“The electrolytes lost in the highest concentrations through sweat are sodium and chloride,” says Maria Dalzot, a sports dietitian and competitive mountain runner based in Bellingham, Washington. “These electrolytes must be tightly regulated for the body to function properly.” Potassium, magnesium and calcium are also lost in sweat, though “in such small amounts that they are not of concern while exercising and can be easily replaced in your everyday diet.”

Some (though not all) experts say that replenishing those lesser electrolytes becomes vital during sustained, multi-hour efforts. Says Toker, “With a finite amount available in the body for easy access, cumulative losses over time for an athlete running four, six or 17 hours will affect calcium and magnesium levels in the blood and inhibit performance.”

The power of electrolytes to help you kick up dirt at a faster clip was illustrated by a 2015 Scandinavian Journal of Medicine & Science in Sports double-blind study, which found that athletes who supplemented with sodium chloride—table salt—and other electrolytes in addition to a sports drink before and during a half-Ironman improved their race times by an average of eight percent. They also experienced less of a drop in body weight compared to those who took a placebo. The scientists additionally reported that salt supplementation worked to stimulate thirst, which encouraged subjects to drink more and, in turn, maintain better hydration.

A recent study in the journal Medicine and Science in Sports and Exercise found that taking electrolytes before your run can also enhance fluid retention, thereby improving rehydration.

If you’re out for a leisurely run lasting less than an hour, your electrolyte stores should be adequate without supplementation. “Replacing salt losses becomes more of a concern when you push past the 60-minute mark, particularly if you’re sweating greatly,” says Toker.

Sweat production, and therefore electrolyte loss, is influenced by a number of factors, including run duration and intensity, genetics, clothing and environmental conditions like humidity.

The most precise way to calculate your electrolyte needs is through a sports lab that offers custom sweat tests. The white coats will measure your electrolyte loss during exercise, and use that data to create a personalized hydration and electrolyte plan. Alternatively, online companies, such as Levelen and Infinit, provide DIY kits that let you gather up your own salty sweat and send it in for analysis.

As a starting point, consult the chart below (provided by Toker), which indicates the average concentration of electrolytes in sweat, and experiment to determine what works for you.

Most of those neon-colored drinks contain no more than 200 milligrams of sodium, and so don’t come close to matching what endurance athletes lose through their sweat glands. If you’re serious about maintaining a healthy electrolyte balance, look to other sources, including salt capsules, electrolyte tablets and dissolvable powders and enhanced gels and chews (see sidebar).

Don’t forget that “real” food can be a good source of sodium as well. If you just finished sweating buckets on a multi-hour epic, it’s O.K. to reach for those salty, crunchy snacks you are craving: pretzels, nuts, potato chips, even a cold slice of pepperoni pizza.

Before you go stuffing your pack full of bananas, understand that potassium’s role in staving off cramps has largely been overblown. “Cramps are most likely caused by overstressed muscles,” says Dalzot. Significant dehydration, poor fitness and electrolyte imbalance, particularly excessive salt loss, can play a role as well.

Runners can also go overboard on electrolytes during taxing runs. “If you do choose to take salt tablets, be sure to drink a sufficient amount of water,” warns Dalzot.

“A large intake of sodium without water can cause bloating as water moves from the bloodstream to dilute the sodium concentration. Sodium also triggers thirst and drinking more than necessary can cause unpleasant stomach sloshing.”

Drop one of these flavored, effervescent tablets into your water bottle for a balance of electrolytes along with a hint of caffeine.

The electrolyte profile in these tasteless capsules corresponds to the ratio typically lost through sweating.

Available as capsules or drink-mix powder, Endurolytes have a low concentration of sodium for maintaining electrolyte balance if you’ve been hitting the salty snacks.

Designed to match the electrolyte profile of blood plasma, S! Caps contain molecules that aid the energy-production cycle as well as sodium and potassium.

Alongside the essentials, MetaSalt capsules contain selenium and zinc to help neutralize free radicals during exercise.

Dissolve one of these tablets in 16 ounces of water for a low-cal, fruit-flavored sports drink with the electrolytes you need.

This article originally appeared in our July 2015 issue.