The night before the 2006 Western States100-Mile Endurance Run, I joined ultrarunning stalwarts … 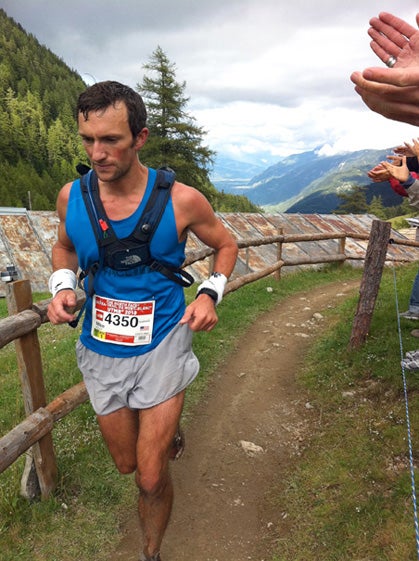 “Joe, would you like another one?” I asked, staring into the fridge.

“Umm, yeah, but then that’s it,” he replied, while talking strategy for the race, which he hoped would take him roughly 19 hours to complete.

Jones-Wilkins and Kulak’s pre-race suds had me scratching my head. Coors in lieu of Accelerade? Maybe I didn’t know as much about nutrition as I thought. So I sought input from expert coaches and talked to some of trail running’s greatest talents. Along the way, I quickly learned that race-day nutrition goes beyond performance between the start and finish lines. It’s what you do before, during and after the Big Event that adds “hops” to your stride.

Most elite athletes consider nutrition throughout their training cycles, and pay extra close attention to it during the week leading up to race day. Count Jasper Halekas as one of them. Halekas, who won the 2007 USATF Trail 100-Mile National Championship, is as meticulous about his training as he is during his day job as Research Scientist at the University of California, Berkeley, Space Sciences Lab.

“For most of the week, I stick to my normal training diet, which is high in protein and carbohydrates, and low in fats,” he explains. “The biggest thing I focus on is pre-hydrating, and make a big effort to drink a lot.”

One word of warning: “drinking a lot” doesn’t mean chugging gallon jugs of water. “Some people drink a ton of water, which then flushes out all their electrolytes,” Halekas, 31, warns, “Drink sports drink, especially for several days before the race, to tank up on electrolytes, too.”

And what about adult beverages? “No way,” he says. “In fact, I don’t drink alcohol for at least three weeks before a major race.” He feels that tactic is based more on superstition than actual performance.

Jim Rutberg, a professional coach and co-author (with Chris Carmichael of Carmichael Training Systems) of Food for Fitness, breaks through the voodoo. “There’s no amount of alcohol that will benefit your performance,” he says. “but having a glass of wine or a beer with dinner isn’t likely to have a negative impact on your performance either.”

He adds, “If you drink, stick with just one or two glasses of wine or beer and follow each with a full glass of water.”

Darcy Africa, who in 2007 set new course records at the Bighorn and Cascade Crest 100-Mile Endurance Runs, stays consistent before a race. “I’m always focused on a healthy diet with lots of fruit, veggies, whole grains, protein,” she says, “and if you change your diet before a race, you’ll put your body off balance.”

According to Rutberg, Africa has it right. “Pre-race is not the time to try out a new nutrition program.”

“Ultimately the pre-race meal can make or break a race,” says Brian Wyatt, a seasoned trail runner and Personal Training Manager at Crunch Fitness in San Francisco. “If you don’t eat anything, you risk not having the fuel in the tank to perform, and if you eat the wrong thing you could have a very unpleasant experience.”

Before the run rises on race day, most runners have already started their engines.

“It is very important to eat a complex-carb, low-glycemic-index and low-fiber meal two or three hours prior to the race start,” says Wyatt. “This will top off your energy stores and keep your blood sugar stable.”

Rutberg concurs. “Your last substantial meal should be two to four hours before the event,” he says, “which allows the nutrients to get out of the stomach and into the blood stream. If [you eat too close to starting time], you’re more likely to experience stomach distress.”

Jones-Wilkins depends on a solid race-morning meal, and his experience dictates a different timing. “I eat an eight-ounce yogurt with granola and a banana about an hour beforehand, then an energy bar a minute or so before the starting gun.”

“The last 90 minutes or so before the event, have smaller snack food, like an energy bar or gels,” says Rutberg. “Also, have water or a bottle of sports drink to top everything off.” Rutberg explains that the body will burn through about 80 percent of its carb reserves the night before the race. “If you don’t replenish it, you could bonk really fast on race day.”

Before her 50- to 100-mile ultras, Africa goes big. “I eat oatmeal with blueberries, a banana, maybe some decaf coffee, and a little Recharge drink,” she explains. “If there’s any room left, I’ll have a toasted PB&J sandwich.”

After the starter’s pistol cracks, nutritional needs change. “I don’t need to eat during, and water has always worked well for me,” says Haefeli.

“The key in the race is to keep the fuel burning steadily,” says Wyatt, who also coaches trail runners through www.zombierunner.com. “Most people do well with a gel or a another easily absorbed simple carb every 30 minutes.”

Says Rutberg, “During the race, the old rule of thumb was to ingest 30 to 60 grams of carbs per hour.” As a reference point, the average gel contains about 25 grams. “It was believed that your body could utilize only about one gram of carbohydrate from the gut per minute.”

However, recent research by Dr. Asker Jeukendrup, Professor of Exercise Metabolism at University of Birmingham (England) has cast this time-tested rule in a different light. “If you combine sugars in a certain way—two parts glucose, one part fructose —you can increase your body’s carb intake by as much as 25 grams per hour.”

More runners are relying almost solely on energy gels as easily digestible carbs. The average gel packet contains about 100 calories, which means you need two gels per hour—a ratio that translates to some astounding figures over the long haul. Kulak, for example, consumes between 40 and 60 gels in a 100-mile effort and half that in a 50-mile trail race.

When it comes to fluids, the equation is a little less complicated. “I try to drink more water than I think I can possibly need,” says Halekas, who runs mostly ultras. “I aim to get down 30 to 40 ounces an hour, more if it’s hot, and try to drink enough to keep peeing throughout the race.”

But water alone won’t cut it. You need to replenish electrolytes and sports drink is a perfect source. Rutberg recommends rotating water and sports drink. “If it’s hot, two 20-ounce bottles per hour is good,” he says. “I recommend one filled with water and one with sports drink. Try not to dilute the sports drink. If you’re grabbing cups, grab a cup of water at one aid station and then a cup of full-strength of sports drink at the next.” Rutberg explains that sports drinks are formulated to be efficiently absorbed from the stomach only if mixed correctly.

Another source for electrolytes is tablet form (try Succeed! S-Caps or Endurolytes from Hammer Nutrition). Many ultrarunners turn to them to supplement their fluid intake. Jones-Wilkins says, “I use Succeed! at a pace of one to three per hour depending on sweat rate. They work wonders in keeping me from cramping.”

Rutberg is not a wholehearted advocate of this approach. “Under most conditions, if a person has a good nutrition and hydration strategy, you perform at your best without supplemental electrolytes,” he says. That’s not to completely discount the effectiveness of tablets. “If it is very hot or you’ve made a mistake, then they can be useful in bringing you back from the brink.”

It’s human nature to complete a major effort and rest on our laurels, even cut loose. But you rebound faster if you eat smart immediately post race.

“Eating within 30 minutes after a race helps muscle recovery by replenishing glycogen stores, so your muscles can start the repair process,” says Wyatt. “A carbohydrate source with some fat and protein is ideal.” Wyatt recommends seeking out sources of omega-rich protein plus some antioxidant-loaded foods (think brightly colored fruits and veggies).

After hammering a tough mountain 10K with over a thousand feet of elevation gain, Haefeli is sure to “get in a good cool-down, then plenty of water and whatever foods are offered at the race.” For her, fruits, granola bars and sandwiches all work. “Just make sure you eat well and rehydrate—if you don’t you may feel light headed, dizzy and even nauseous.”

And, naturally, treat yourself.

“I try to eat a lot of protein to help heal damaged muscle fibers,” says Halekas. “This is also my reward time, though. I eat anything and everything that I feel like, especially stuff that I’ve denied myself during training. It’s my time for ice cream, beer and other treats.”

“Post-race I always crave a cheeseburger and fries as well as several beers,” says Jones-Wilkins, adding in a good-natured rib at his pal, Joe Kulak. “The type of beer varies but when he’s buying I am not too picky.”

And, on a more serious note, Jones-Wilkins adds: “Then, over the next few days I try to keep a balanced diet and just eat until I am full whenever possible.”

Garett Graubins is a Senior Contributing Editor to Trail Runner.

Joe Kulak, Philadelphia, Pennsylvania, record-holder for the Grand Slam of Ultrarunning (running the four most prestigious 100-mile ultras in the same summer): “The night before only pasta … no salad, some ice cream.”

Andy Jones-Wilkins, Ketchum, Idaho, top-10 Western States 100 finisher and winner of the 2007 Vermont 100: “I go with the classic big bowl of pasta, meatballs and bread, and five or six Sierra Nevadas to help me sleep.”

Darcy Africa, Boulder, Colorado, winner of the 2007 Bighorn and Cascade Crest 100-Milers: “The same meal I’ve had ever since I was a kid the night before my big swim meets … pasta! I make it myself with red sauce, veggies and some form of vegetarian protein like Gimme Lean (a fat-free, soy-product replacement for ground beef) or tofu.”

Jasper Halekas, Oakland, California, 2007 USATF 100-Mile National Champion: “I eat a lot of carbs to top off my glycogen stores, and have my big meals early in the day and stick to a smaller meal in the evening. Hopefully, this leads to me being able to get it all out in the morning and not have to take pit stops during the race.”

:: Eat foods rich in carbohydrates that will sit well in your stomach.

:: Avoid cream sauces, high-fat and sugary food that will keep you up at night.

:: Top off your carb stores with a meal two to four hours before the race.

:: During the race, shoot to take in 40 to 60 grams of carbohydrates (about two gels) per hour.

:: Rotate between water and sports drink, aiming for two 20-ounce bottles per hour.

:: For muscle recovery eat within 30 minutes after a race.

:: Seek out a carbohydrate source with some fat and protein.

:: Antioxidants help neutralize the elevated level of free radicals in your system after a hard effort.