It seems no two pre-race breakfast routines are alike. Here is what a few of the pros do on race morning 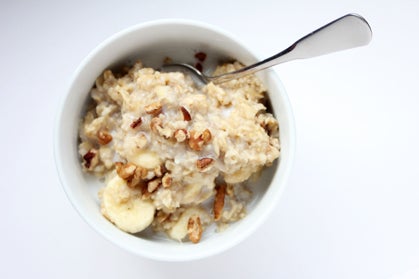 Above all, make sure your pre-race meal is something familiar. Photo by Rachel Hathaway, Creative Commons

The ideal pre-race breakfast might be the least agreed-upon subject in all of running.

Running any distance requires calories that an empty stomach might not provide, but the strain of running at high intensity for a long time can be hard on the stomach, making excess food an unwelcome guest for the duration of the race. Some people will chow down before races as short as a 5K, while others eat very little for distances up to a marathon.

The important thing, says Stephanie Howe, of Bend, Oregon, is to do what is familiar to you. “Reading what I eat and trying it out race morning will probably end badly for most people,” says Howe, who in addition to winning most races she enters is working toward her PhD in nutrition and exercise physiology. “You need to stick with what you know and try it out several times before the race.”

While runners with dicey stomachs might be able to get away with eating little or nothing before shorter races, ultramarathons tax the body well beyond its limits of glycogen storage (typically around 90 minutes), meaning consuming calories throughout the race will be paramount.

But will spending four-plus hours on the trails require a bigger breakfast—a caloric head start—to get you through and ward off the calorie deficits than can prematurely end a race? It depends who you ask.

In J.B. Benna’s documentary film Unbreakable, which chronicles the 2010 Western States 100, Geoff Roes memorably says he attempts to consume about 800 calories before a 100-mile race. “Sometimes that’s too much, sometimes that feels not so good for the first hour or so,” he says in the film. “But … I’d rather feel that for an hour than, you know, four hours into it, feel really hungry.”

Picking the right type of foods—in addition to foods that are familiar to you—can make meeting this caloric requirement for those averse to running on a full stomach. “Ideally, a pre-race meal should be high in carbohydrate, emphasizing simpler forms without a lot of fiber to prevent gut distress,” says Howe. “Think bread, oatmeal, bananas, etc. The meal should also have moderate amounts of protein and fat to keep you satiated.”

“A pre-race meal should be enough to fill you up and keep you from becoming hungry before the start of the race,” she continues. “That is going to depend on body size, timing before the race and the race distance.”

Final meal before race time:  I like to have two slices of sourdough bread (or a bagel) with peanut/almond butter. I also enjoy a cup or two of black coffee along with lots of water.

Time between eating and racing: About three hours.

“A meal with mostly carbs and a little fat and protein seems to give me plenty of energy while being easy on my stomach. I give myself three hours to digest my food thoroughly and do some last minute hydration.”

Final meal before race time: A banana with peanut butter and black coffee.

Time between eating and racing: Two hours. This is usually early enough to wake up properly and give the body time to move, warm up and digest.

“I don’t like to have a full stomach when running, but this is enough to fuel me for a good two hours of lower-intensity running. Then I begin topping up with mulebars and gels.”

Time between eating and racing: About 90 minutes before the gun.

“Why? Simple, it’s my routine. Never change your routine heading into a race!”

Final meal before race time: An ocean roll (similar to a croissant with cardamom), peanut butter and a banana. If it’s a longer race (more than 50 miles) I will also try to eat some white rice. I aim for 500-800 calories, but it varies depending on the race. I also always have coffee, 1-2 cups max though. I’m usually too nervous to have more.

Time between eating and racing: I eat as close to the race as possible. There is no difference in performance if you eat one to three hours before the race- it’s just personal preference. I don’t like to get hungry before the start so I eat within an hour of race time. If I have a long drive to the race start I’ll eat my breakfast and bring a Clif Bar or banana and peanut butter along for a snack.

“I think eating right before you run is trainable. Actually I know it is. People who ‘can’t eat’ right before a run can learn to do it during training.”

Final meal before race time: Just something simple and small like a Clif bar and Clif Shot gel.

Time between eating and racing: Most races start so early it’s usually about an hour before the race then a Clif Shot gel about 15 minutes before.

“I don’t want much sitting in my stomach at that late point and aim to eat constantly through the run instead … I’m not a morning person so a 4 or 5 a.m. start is already difficult to get up for!”

Final meal before race time: It’s been the same thing for years! Half of an almond-butter sandwich and half a banana.

Time between eating and racing: 60 to 90 minutes.

Simply put, it’s what works best for me. When I first started doing marathons I would eat oatmeal and a whole banana, and it made me sick. So I tried different foods and my choice now works best. My belly is typically happy when I train and race and if it’s real, whole food I never have to worry. My pick for pre-race fueling is on the bland side but I have learned that bland is sometimes the best way to go. I haven’t changed this routine in almost seven years; it works so I stick to it.”

Does Carbo-Loading Even Really Work?

There’s No Space For “Guilt” In Endurance Fueling