Unlock this article with Outside+.

Gels are a convenient source of carbohydrates for runs and races, but some runners struggle to choke them down. Most sport-specific gels are made of maltodextrin, a substance derived from the starch of rice, potatoes, wheat or, most often, corn. Though it is a natural ingredient, the amount of processing done to obtain maltodextrin strips it of palatability and requires it to be mixed into a cocktail which some manufacturers’ mixologists haven’t gotten quite right, according to the tongues (and stomachs) of some athletes.

As a race-ready alternative, natural sugar sources are minimally processed and naturally delicious and tend to contain a higher dose of minerals and antioxidants than gels and refined sugars. Plus, they’re typically found in your local grocery store. Test out these four options during training to find out which will work best for you on race day.

Used as fuel for athletes in the ancient Greek Olympics, honey is the original energy gel. In addition to glucose and fructose, honey contains water and small amounts of vitamin B6, iron and manganese, along with pollen and protein. Compared to gels, honey has a low glycemic index, so sugar is released more slowly into the blood stream, maintaining more even blood-glucose levels, which some athletes may find optimal for slow-burn endurance activities. Honey also contains antioxidants that help reduce muscle inflammation and oxidative damage; the concentration depends on the flowers from which the bees removed the pollen.

Look for: Generally, the darker the honey, the higher the antioxidant content. Many honeys found in grocery stores are processed to remove pollen, which diminishes the health benefits. Choose organic raw honey which comes straight out of the comb. Local raw honey may also help reduce seasonal allergy symptoms by exposing you minute amounts of the pollen produced by plants in your area. Manuka honey from New Zealand is highest in antioxidants but has a strong flavor.

On the run: With a consistency similar to standard gels, honey can be consumed in the same way. The Colorado-based brand Honey Stinger offers honey in the same packets as gels. Choose the Gold Classic Energy gel which contains 95% pure honey combined with electrolytes and B-vitamins. Or, just make your own gels using resealable snack bags. Per 30 ml (about two tablespoons), honey contains about 130 calories. 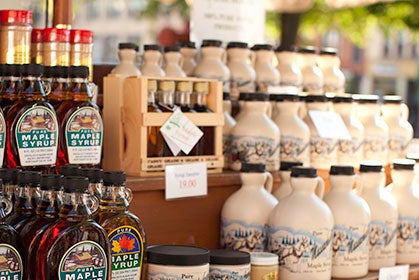 The product of the North American maple tree, maple syrup has benefits beyond making foods like pancakes and barbecue ribs exceedingly delicious. Maple syrup is quite nutrient dense for a substance mainly composed of sugar; far surpassing honey, it is high in iron, important for carrying oxygen to muscles through the blood stream; manganese, which aids nutrient absorption and the neutralization of free radicals; and sodium and potassium, both key electrolytes for staying hydrated. Maple syrup may also have anti-inflammatory properties, according to a 2014 study in the Journal of Functional Foods. As with honey, maple syrup has a moderately low glycemic index.

Look for: Be sure to buy pure maple syrup; many common supermarket brands are corn-syrup concoctions that don’t come close to the real deal. If you’re lucky enough to live in maple country, your local farmers’ market or “sugarbush” (as maple farms are called) likely has a multitude of maple products, from syrups of different grades to maple-sugar candy.

On the run: Maple syrup is less dense than honey, so it goes down a little easier. A new crowdfunded startup called Untapped is marketing pure, organic Vermont maple syrup in energy gel packets, with endurance athletes in mind. Maple candy is another portable, mess-free option. Two tablespoons of maple syrup has about 108 calories. 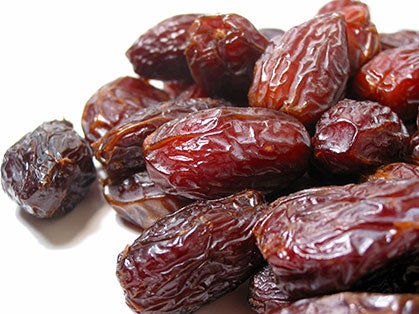 Dates are a staple of Middle Eastern cuisine, and are commonly eaten to break the fast during the Muslim holiday of Ramadan because of their quick, revitalizing energy boost. Dates are easily digestible for most people, and not as messy as the viscous liquids on this list, making them a great whole-food alternative to gels for mid-run fuel. (Plus, there’s no packaging to deal with.)

Dates contain anti-inflammatory tannins as well as a significant amount of vitamin B, which helps support the metabolism. Other trace minerals like manganese and potassium are also present. A moderate glycemic index provides sustained energy. Note that dates are high in fiber, and can speed up the digestive system, meaning you might have to make a wilderness pit stop if you overdo it.

Look for: Your best deal is to get dates in the bulk section of your grocery store. Medjool dates are the moistest and softest, making them easiest to chew and enjoy.

On the run: Pitted dates are often stuffed with almonds or other nuts, adding a bit of protein and healthy fat and making for a well-rounded snack. One pitted medjool date weighs about 24 grams and contains 60 to 70 calories.

RELATED: No, You Don’t Really Need Those Pricey Sports Gels. Fuel Your Runs With These 4 Natural Foods

Since much of the sugar has been boiled out, the thick blackstrap molasses has a high concentration of the minerals sugarcane roots absorb from the soil, making it the most nutrient-dense fuel on this list. It’s especially high in magnesium, which aids calcium absorption and nervous system function, and can help prevent muscle spasms. It also contains potassium, iron, vitamin B and manganese.

RELATED: 3 DIY Energy Bars for Your Next Run

Though blackstrap molasses has a ton of nutritional benefits, it can have stool-softening effects. Also, it has a strong, bittersweet taste, which many find unfavorable.

Look for: Be sure to get unsulphured molasses, which is the product of sun-ripened sugarcane. Sulphured molasses is made from immature sugarcane treated with sulphur fumes to help extract the sugar.

On the run: There are a few recipes out there that turn this thick substance into a delicious fuel. This one, from Active.com, tells you how to make your own “power goop” using honey, molasses and salt. Nutrition author Mark Sisson also offers a recipe for a natural, homemade sports drink substitute using those same ingredients and coconut water.

How to Make Your Own Energy Gels

What to Eat During a Workout

What We Can Learn About Endurance Fuel From Ancient Greece